The Trump administration moved over the weekend to ban all immigration from seven Muslim nations, including stopping the entry of students and scholars with valid study and work visas from those countries.

A large number of students come to study in the United States from these nations: Iran ranks 11th on the list of countries that send students to the United States. Iraq and Syria participate in a student leaders program supported by the US-Middle East Partnership Initiative. The program brings students to the U.S. to “expand their understanding of civil society, as well as the democratic process and how both may be applied in their home communities.”

Iraq also has an active Fulbright program – an international exchange program meant to “increase mutual understanding between the people of the United States and the people of other countries by means of educational and cultural exchange.”

As a scholar of international education, I have seen the impact of American higher education abroad. While conducting field research in the United Arab Emirates on development of American branch campuses in the Middle East, I was struck by the response of the residents after George Mason University closed its UAE-based campus in 2009.

The setting up of the university campus was heralded as an expansion of American values overseas, and its closure was viewed as an example of “America withdrawing its support” for the region. I was asked, “Why did America choose to pull out of the region?”

In a region where higher education institutions are largely controlled by the government, it was difficult to explain that it was a decision of a single institution, not of the American government.

The fact is that over the decades America has made considerable investments in building goodwill around the world through higher education exchange efforts. Evident in the responses of the people in UAE was how the action of a single institution could erode those sentiments.

So, what might Trump’s ban mean for the U.S. role in international education? And will it undermine the use of international higher education as a soft power tool for the United States?

First, let’s look at the role higher education has played in expanding American influence and in building stronger relationships between nations.

In 1945, Senator William Fulbright from Arkansas sponsored a bill to fund a program to support “international good will through the exchange of students in the fields of education, culture and science.” 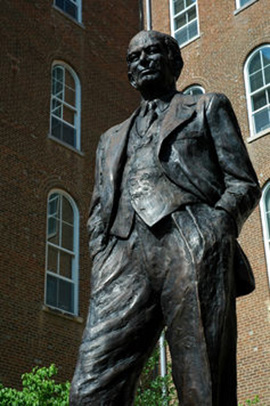 A statue of Senator William Fulbright at the University of Arkansas. Clinton Steeds

Today, the Fulbright program is probably the most widely recognized initiative in the world supporting international exchange, facilitating the movement of more than 360,000 students and scholars across more than 160 countries during its history. Its value is more symbolic – it represents the United States’ view about how international education can support democracy and encourage positive relationships between nations.

The free flow of students and scholars has served well the interests of the United States, including students from those with differing ideologies.

One of the most famous alumni of the Fulbright program was Russian student Alexander Yakovlev, who came to the U.S. to study at Columbia University in 1958 – the period of the Cold War. That same person would return to the USSR to become a close ally of Mikhail Gorbachev and eventually become the “father of glasnost,” the political philosophy (along with “Perestroika”) that eventually brought down the Iron Curtain.

More recently, during a standoff between the United States and China over the future of blind Chinese political dissident Chen Guangcheng, New York University stepped in to offer him a visiting scholar position in New York, thereby diffusing a tense situation.

Time and again international education has been a critically important soft power tool.

Coming back to international exchange –– it has played a significant role in promoting peaceful relations between nations for decades. 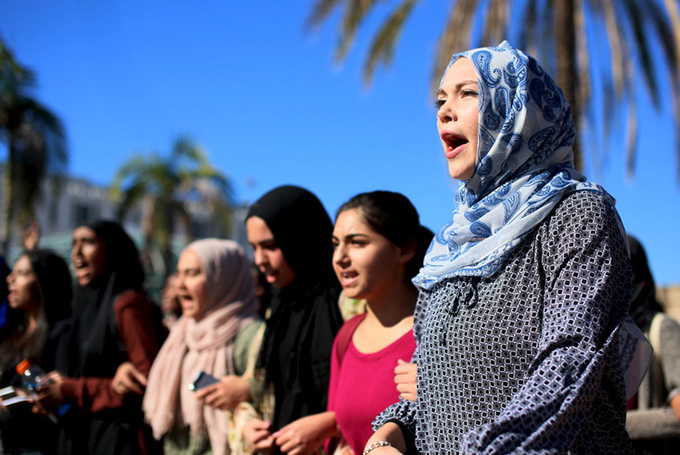 The U.S. has the largest number of international students. Sandy Huffaker/Reuters

After relations between the two nations deteriorated following the fall of the shah of Iran, the number of students coming to the U.S. dropped dramatically, until there were fewer than 1,700 students in 1998-1999. However, in the 2000s, as relations with the two nations began to warm, the trend finally began to turn around, with the number of students more than doubling from 2010 to 2015.

The other nations on the banned list do not have nearly as robust numbers as Iran, yet they do send students to the U.S. Those numbers are growing overall. Both Iraq and Libya have more than 1,000 students currently studying in the U.S. Although other nations send fewer (there are only 35 Somali students) in total, there were more than 17,300 students from the banned countries studying in the U.S. last year.

In fact, more than 10 percent (about 108,000) of the international students in the U.S. come from the Middle East and North Africa regions, the home to most of the banned countries. When they return home, these students serve as ambassadors of the U.S. and, while here, help us gain a greater appreciation for their culture.

How these actions will impact the students is not clear, but we do know that major events can have lasting impact on international education numbers.

For about five years following the 9/11 terrorist attacks, the total number of international students studying in the U.S. declined. Much of this decline came from students in Muslim majority nations, who could either not obtain a visa or chose not apply for it. They also feared they would not be welcomed in the United States.

And this was at a time when the American president, George W. Bush, argued that “Ours is a war not against a religion, not against the Muslim faith. But ours is a war against individuals who absolutely hate what America stands for.”

Data have already suggested that the rhetoric of the current administration has weighed on the minds of students considering where to study abroad. A study by international student recruiting companies prior to the election found that 60 percent of the 40,000 students surveyed in 118 countries would be less inclined to come to the U.S. if Trump won the election (compared to only 3.8 percent who would be less inclined if Clinton won). And that was before the rhetoric turned into reality.

Where is this all going?

An early policy paper by the Trump team seemingly called for the elimination of J-1 visas, which allow for international youth to pursue temporary work in the U.S. And the current administration has sent signals indicating that it would make it more difficult for immigrants to receive H-1B visas, awarded to individuals with specialized skills.

Both of these programs are used by universities to support student and scholar exchanges. It is not yet clear if the current administration will pursue policies in these area that will affect universities in the same way the ban has done. 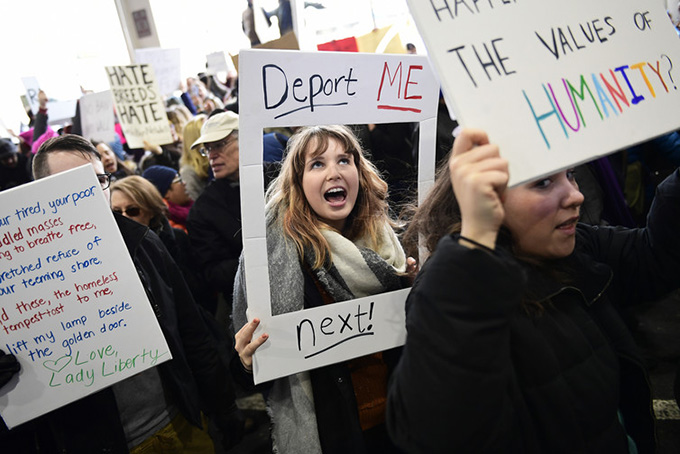 A Temple University student holds up her sign during a protest in Philadelphia. AP Photo/Corey Perrine

What is clear is that the recent ban has already sent a chilling effect across colleges near and far. Within one day, there were reports of students being trapped overseas and in the U.S. An Iranian Ph.D. student at SUNY Stony Brook was detained at JFK and almost deported.

Another Iranian, pursuing his Ph.D. at Yale, was traveling internationally to conduct research, and feared that he might not be able to return to his studies even though he was a green card holder (the administration subsequently reversed its ban on permanent residents from those nations). There is no telling how many others are blocked from returning having been away on break between semesters.

Protecting our nation is one of the most important roles of the federal government, and we do need to be thoughtful about how to establish effective immigration polices. However, the broad-based nature of the ban flies in the face of decades of support for the power of international exchange. Even a foreign policy hard line approach would typically be softened by an ongoing support of international exchange.

“Educational exchange can turn nations into people, contributing as no other form of communication can to the humanizing of international relations.”

The motivation for this ban is the concern that we might let in a terrorist. But what if we turn away the next great scientist or peacemaker?

Author Bio: Jason Lane is Chair and Professor of Educational Policy and Leadership & Co-Director of the Cross-Border Education Research Team, University at Albany at the State University of New York