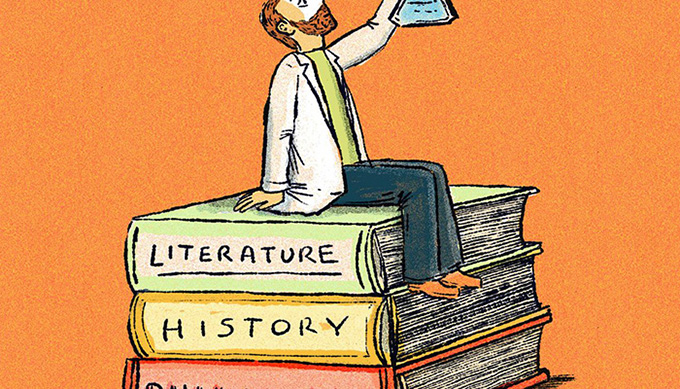 As a former vice-chancellor, I understand the need to balance a university’s books and to refocus provision from time to time. And I realise that those who lead institutions now do so amid a pandemic they could not have predicted, an associated loss of international student income that they can do little to stem and government proposals to cut funding for some higher-cost arts and humanities courses.

Still, I was truly saddened when I heard that some universities facing severe financial pressures are thinking of closing degrees in the arts and humanities. One institution is considering closing its entire department of history, languages and translation; in another, history and human geography courses will not recruit from September.

The pandemic isn’t the only relevant context. In recent years, the focus of UK education policy has been on “high-value” STEM courses, along with the expansion of vocational education. As a physicist and a long-standing advocate for technical and vocational education, you might expect me to agree with a move away from subjects such as history. But you’d be wrong.

Let me explain. When I was 16, I had to make a choice about what to study at A level. My best subjects were history, French, physics, chemistry and mathematics, but the system allowed me to choose only three of them. It was a terrible wrench: I’d become fluent in French after an exchange holiday, and my love of all things to do with history was already deep. I set my course in the sciences, but the knowledge remained that this was only a partial view of our lives.

That sense was emphatically underlined by a 2015 BBC television series by historian David Olusoga called Britain’s Forgotten Slave Owners. It brought me face-to-face with my ignorance of the UK’s involvement in the economy of slavery, making new sense of our cities, institutions and economies. It challenged assumptions and offered humbling insights about how we became who we are, and whose work and lives made that possible. It was a hard lesson, but one that matters.

There are other histories we should confront, each of them with insights that have relevance to our own lives and times. That includes even the ancient past. Consider one of the biggest threats to democracy of our day, disinformation and fake news. Think that’s a new problem? Not at all. Historians have discovered that the famous monuments commemorating the celebrated Pharaoh Rameses the Great’s victories and skills as a warrior are little more than ancient propaganda, often belying the reality of defeat.

Historians are the fact-checkers of our accounts of civilisations and power. They ask how we know what we know, what we can trust and who we should believe. They sort through conflicting narratives, the prominent and the unsung, in the search for understanding. They are the detectives investigating not only crimes but also the rise and fall of powers and the life stories that those vicissitudes shape – of both the victors and the vanquished.

So why the threat to history and other humanities courses now? And does it really matter?

Most countries do not require pupils to make momentous choices at such an early age about what they need to understand of the world. We in the UK compound this error with a perception – accurate or not – that A levels in history and languages are especially hard. Those seeking a higher university entrance score or planning to focus on sciences turn away. Many never go back.

And it is worse than that. The threat to subjects such as history is not shared across the whole of higher education. The risk is that their study will be focused in institutions that are more commonly the preserve of the middle class, becoming inaccessible to those on the wrong side of history’s tracks.

My predecessor as University of Sheffield vice-chancellor, Bob Boucher, was an engineer by education and passion. But he readily praised the skills of historians such as his registrar, David Fletcher. He believed that these brought to complex tasks the ability to sift information, form judgements about what mattered and express them convincingly. To him, this was a highly transferable skill, needed in many organisations and fields of endeavour. To have a superb history department, alongside a superb mechanical engineering department, was a sign of a whole education in his Steel City.

I agree. I am proud of my role in helping to establish Sheffield’s Advanced Manufacturing Research Centre. I welcome the proliferation of manufacturing apprentices on the plains of Orgreave, the scene of an infamous “battle” between the police and striking miners in the 1980s that some see as the final battle of an industrial civil war. I am proud of the renewal that has taken place and of the reinvigoration of a centuries-old tradition of craftsmanship and innovation. But our places and communities have a rich history, and those who weld or braze should also have the opportunity to understand that history.

There are reasons we face the challenges we do. And there is inspiration in the accomplishments of those who went before. History matters, and its contemporary resonances are too important to be the preserve of the few.

As William Faulkner wrote: “The past is never dead. It’s not even past.”