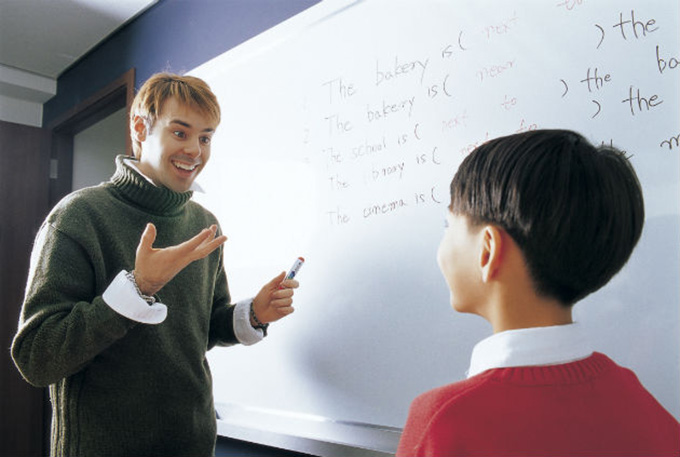 You have certainly happened to chat with someone in a language you do not understand well. In this kind of situation, one of the reflexes to better understand what is being said is to base oneself on the gestures or facial expressions of the other person. Perhaps he will even have made the effort to underline or illustrate his speech with gestures to make your task easier.

Most language teachers are used to this type of communication. Indeed, when speaking to their students in the language taught, they frequently add pointing gestures, mimes or facial expressions to their words. These kinesic elements facilitate the decoding of information and access to meaning in a foreign language.

It is not necessary to mimic every word that is pronounced in a foreign language, this would unnecessarily burden the speech and would be counterproductive. It is above all a matter of illustrating the keywords, from which the learners will reconstitute the overall meaning of their statements.

It works just as well for adults as it does for children as long as the gestures are not abstract or difficult to decode for the latter. For example, a gesture commonly used to illustrate the act of drinking is to bring the thumb outstretched towards one’s mouth with the other fingers of the hand bent. For an adult, this configuration of the hand represents a bottle of which the thumb is the neck. However, for kindergarten children, this gesture can be interpreted as meaning “to suck one’s thumb” since imagining a bottle is too complex a level of abstraction.

In addition to having a positive effect on the comprehension of statements, the use of gestures in class can help memorization. This is reinforced when the teacher produces gestures with new vocabulary words. And when learners reproduce these gestures by repeating the lexicon to be learned, the effect is even greater . It also works for learning grammar and phonetics .

Why this effect? Quite simply because information is better memorized if it is encoded several times, and in different ways. If we add a gesture to a verbal element and also have it reproduced by the students, we create a triple coding – auditory, visual and motor – which considerably consolidates short-term and long-term memorization. In addition, involving the body of the learners appears essential for maintaining attention and memorization.

Indeed, expressing oneself in a foreign language in front of other people (classmates or strangers) is, for many learners, a difficult test to overcome. Being afraid of making mistakes, pronouncing badly, stammering, not being able to express yourself or not being understood can be a stressful, discouraging, even crippling time. Knowing how to overcome your fear of speaking in front of others and daring to express yourself in a language that you do not understand well can be learned through techniques that involve the body.

Indeed, before putting words in a foreign language, we will learn to gain bodily confidence before adding the verbal to its expressiveness. Many educational initiatives and research projects highlight the benefits of these bodily techniques for language learning, whether through dance or theater , for example.

A role of conductor

If the involvement of the body in general is beneficial for learning, it is also beneficial for teaching. Because gestures are a real educational tool for the teacher and can fulfill different functions . The first function is that of information. When we teach a language, we transmit information on lexicon, grammar, pronunciation or even how to communicate in the language. The pedagogical gestures used by the teacher make it possible to illustrate these elements: for example by miming action verbs to make them understood or by showing the position of the lips to pronounce a sound or by making upward or downward movements to indicate an intonation.

The second function is that of animation, which includes both the gestures used to give instructions (showing three with his fingers by saying “you will work in groups of three” for example) and the gestures to regulate the speaking ( point towards a learner to question him, make a gesture of the hand palm up to ask him to speak louder or a hush with the index finger on the mouth in the direction of talkative students).

Finally, the last function is that of evaluation. It is used to give feedback on a learner’s intervention by encouraging him without interrupting him verbally (by smiles and nods for example) or by signaling him an error so that he can correct himself (by a frown or a raised index finger). In these different functions, the gesture can be redundant with the speech but can also supplement it, even replace it (in the case where one does not want to interrupt the learner for example).

Last interesting aspect, the teacher also uses his body to multiply. In the classroom, he must simultaneously manage several actions. Like an orchestra conductor, he can regulate speaking: point with his right hand towards a learner whom he questions, while indicating with his left hand to another learner that he must wait his turn , eyeing the rest of the class for their attention.

It is easy to imagine how the health crisis we are currently experiencing is disrupting the teaching gestures of the language teacher. First of all, the masked face makes listening comprehension and pronunciation particularly difficult when you cannot see the teacher’s lips. It is therefore necessary to compensate with the gaze or manual indications. The educational initiatives mentioned above involving dance or theater are difficult to implement in the age of social distancing and students are encouraged to remain seated in their health bubble rather than moving around the classroom. 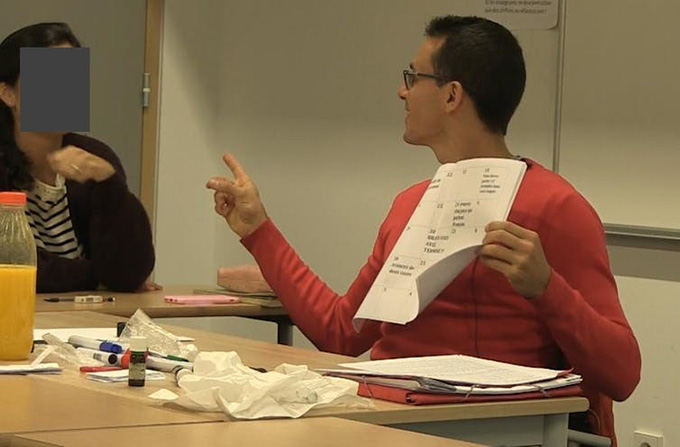 The pedagogical gestures can have an animation function. Marion Tellier , Author provided

As for distance education by videoconference, it also complicates things: impossible to point at a student, difficult to play with looks and compulsory to produce gestures within the restricted framing of the webcam.

To conclude, the question of teacher training arises. As with their learners, speaking in front of a group, accepting the scrutinizing glances of the pupils on oneself, daring to mimic in an ostensible manner and exaggerating one’s facial expressions to dramatize one’s body is not always easy for novice teachers.

In the same way that we train actors to express with their bodies, we must train teachers (and not only language teachers), for example using theatrical practices and videoscopy. This does not mean training teachers by forcing them to adopt a gesture, but rather helping them to optimize their resources. A smiling teacher, well in his body, with an illustrative and visible gesture and a glance encompassing all his pupils will be more effective in his profession and will know how to capture the attention.