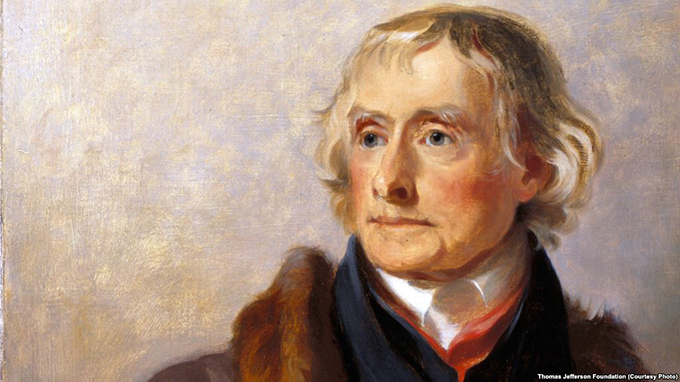 President Donald Trump has directed the United States Department of Education to evaluate whether the federal government has “overstepped its legal authority” in the field of education. This is not a new issue in American politics.

Ever since the Department of Education became a Cabinet-level agency in 1979, opposition to federalized education has been a popular rallying cry among conservatives. Ronald Reagan advocated to dismantle the department while campaigning for his presidency, and many others since then have called for more power to be put back into the states’ hands when it comes to educational policy. In February of this year, legislation was introduced to eliminate the Department of Education entirely.

So, what is the role of the state versus the federal government in the world of K-12 education?

As a researcher of education policy and politics, I have seen that people are divided on the role that the federal government should play in K-12 education – a role that has changed over the course of history. 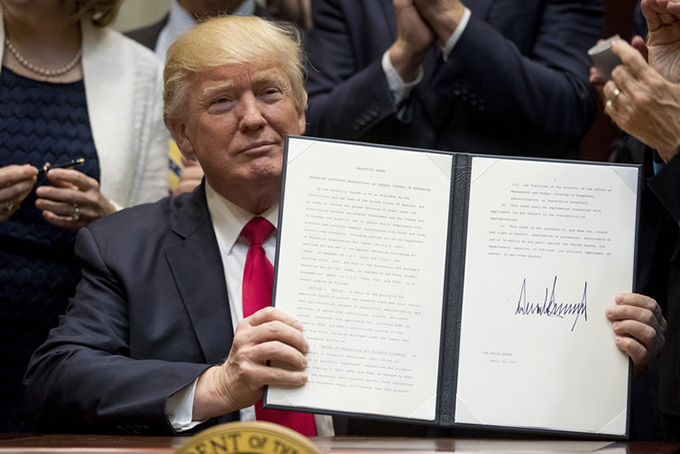 Growth of public education in states

The 10th Amendment to the United States Constitution states:

“The powers not delegated to the United States by the Constitution, nor prohibited by it to the States, are reserved to the States respectively, or to the people.”

This leaves the power to create schools and a system for education in the hands of individual states, rather than the central national government. Today, all 50 states provide public schooling to their young people – with 50 approaches to education within the borders of one nation.

Public schooling on a state level began in 1790, when Pennsylvania became the first state to require free education. This service was extended only to poor families, assuming that wealthy people could afford to pay for their own education. New York followed suit in 1805. In 1820, Massachusetts was the first state to have a tuition-free high school for all, and also the first to require compulsory education.

By the late 1800s, public education had spread to most states, in a movement often referred to as the common school movement. After World War I, urban populations swelled, and vocational education and secondary education became part of the American landscape. By 1930, every state had some sort of compulsory education law. This led to increased control of schools by cities and states. 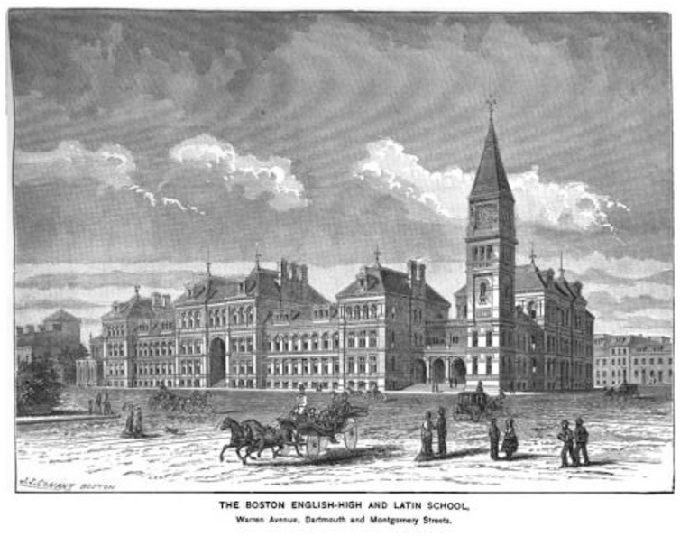 Massachusetts was the first state to offer tuition-free schooling for all students. Artist: George Clough / Wikipedia

As for the federal government’s role, education is not specifically addressed in the Constitution, but a historical precedent of central government involvement does exist.

In 1787, the Continental Congress, the central government of the United States between 1776 and 1787, passed the Northwest Ordinance, which became the governing document for Ohio, Illinois, Indiana, Michigan, Wisconsin and part of Minnesota.

The ordinance included a provision encouraging the creation of schools as a key component of “good government and the happiness of mankind.” Just two years earlier, the Land Ordinance of 1785 required land to be reserved in townships for the building of schools.

The role of the federal government in general grew much larger after the Great Depression and World War II, but this growth largely excluded K-12 education until the 1960s. In 1964, President Lyndon B. Johnson included education policy in his vision of a “Great Society.”

In 1965, President Johnson signed the Elementary and Secondary Education Act (ESEA) into law. This law decidedly changed the role of the federal government in the world of K-12 education.

ESEA doubled the amount of federal expenditures for K-12 education, worked to change the relationship between states and the central government in the education arena, called for equal treatment of students no matter where they reside and attempted to improve reading and math competency for children in poverty.

ESEA was passed with the intention of bridging a clear gap between children in poverty and those from privilege. Title I of the ESEA, which is still referenced frequently in K-12 education policy, is a major provision of the bill, which distributed federal funding to districts with low-income families. 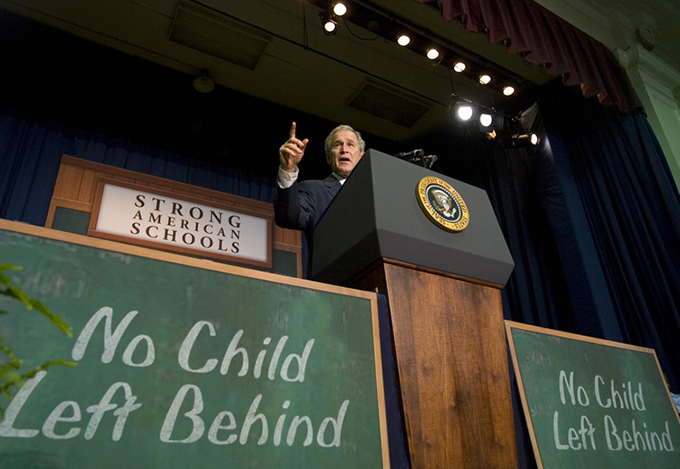 President George W. Bush passed one of the most well-known reauthorizations of ESEA in 2001, with No Child Left Behind. AP Photo/J. Scott Applewhite

ESEA is still the law of the United States today. However, the law has required periodic reauthorization, which has led to significant changes since 1965. One of the most well-known reauthorizations was President George W. Bush’s No Child Left Behind (NCLB) Act of 2001. NCLB called for 100 percent proficiency in math and reading scores nationwide by 2014, and expanded the role of standardized testing to measure student achievement.

Under President Barack Obama, Race to the Top was established, requiring states to compete for federal grants through a point system, which rewarded certain educational policies and achievements. This resulted in nationwide changes in the way teachers are evaluated, and placed even more emphasis on test results.

In 2015, Obama signed the Every Student Succeeds Act (ESSA) into law. This is the latest reauthorization of ESEA, and returns some federal power over education back to states, including evaluation measures and teacher quality standards.

Since the 1980s, a growing trend in the field of K-12 education has been the growth of school choice and charter schools. Every state has its own policy regarding these issues, but during the presidential campaign of 2016, President Trump assured that his administration would provide federal money to help students attend a school of their choice. Secretary of Education Betsy DeVos has dedicated her career to the cause of school choice.

On April 26, President Trump signed the “Education Federalism Executive Order,” which requires the United States Department of Education to spend 300 days evaluating the role of the federal government in education. The purpose of the order is to “determine where the Federal Government has unlawfully overstepped state and local control.” This comes on the back of a proposed 13.5 percent cut to the national education budget.

It’s not yet known what the results of this study might conclude. But, in my opinion, it may impact ESEA and the current funding structure that has been the norm for over 50 years, dramatically impacting funding for students in poverty and with special needs.

Author Bio: Dustin Hornbeck is a Ph.D. Student in Educational Leadership and Policy at Miami University