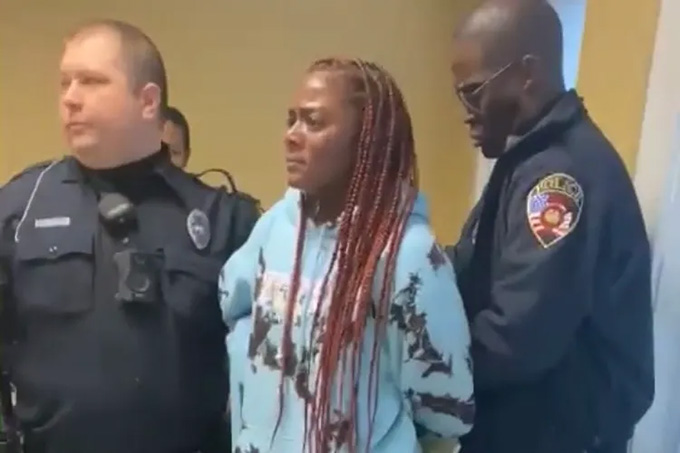 When a video emerged of a 20-year-old Black student being arrested at Winston-Salem State University on Dec. 14, 2022, after she got into a verbal argument with her professor, it brought renewed attention to the often controversial role of campus police. Here, Jarell Skinner-Roy, a University of Michigan doctoral student who is examining how students of color view police and surveillance on college and university campuses, breaks down the significance of the episode at the historically Black college in North Carolina.

What does this video prove?

For me, this is additional evidence of how colleges and universities often function as an extension of what some scholars refer to as the “carceral state.” That includes penal institutions, but it also involves people’s views on when law enforcement should get involved in disputes and altercations.

A wide body of research has already found that people of color are disproportionately affected by the carceral state. My preliminary research is beginning to show that this also holds true in higher education.

To me, this incident is also an example of how colleges and universities weaponize police against students. In this case, a university staff member – who was not involved in the dispute – decided to call campus law enforcement on this Black student. Other students in the video can be heard saying that the student did not start the argument.

Elwood L. Robinson, the chancellor at Winston-Salem State University, denied that this incident is a case of police being weaponized against students. In the video, the student is shown being handcuffed by police as she questions why police were called.

In my view, there were other more productive and safer ways to handle this verbal disagreement between a professor and a student. Yet, in this case, university officials have defended the decision to call campus police.

“In accordance with law enforcement procedures, our officer’s first priority is to assess the situation and provide every opportunity for a positive resolution,” Robinson said. “As situations escalate, their responsibility is to ensure the safety of the students, faculty and staff members that are present.”

The chancellor denied that the incident was a case of police being weaponized.

“We understand that the weaponization of police is a prevalent problem in our community,” Robinson said. “However, that is not what happened in this incident.”

Why is this problematic?

When colleges and universities are so intimately tied with the carceral state through their partnerships with police departments as well as their own law enforcement agencies, punishment will always take precedence over safety. In this case, this student is now facing criminal charges for misdemeanor disorderly conduct.

This theme of prioritizing punishment over safety directly aligns with the preliminary findings of my ongoing research on campus policing with the Campus Abolition Research Lab at the University of Michigan. In interviews I did with 40 students in focus groups earlier in 2022, one preliminary finding is students of color often report having had negative experiences with campus police. They also report being unfairly monitored and reprimanded and therefore do not feel safe around them.

Is this a one-time thing or systemic and widespread?

I believe it’s important not to see these incidents as unfortunate yet isolated cases. In reality, there have been many documented incidents of colleges and universities weaponizing police against their students. Some recent and notable examples include a Georgia State University officer removing two Black students from their classroom for being tardy earlier this year, several campus police officers at Barnard College restraining a Black student who was trying to enter the campus library, and a Yale police officer holding at Black student at gunpoint who was just walking home from the library in 2015.

Furthermore, there have been many tragic incidents of campus law enforcement killing students on campus, including at Cal State San Bernardino in 2012 and Georgia Tech in 2017.

Colleges and universities have a long tradition of weaponizing police or even soldiers against their students, especially as a means of quelling student protests, as was the case in the deadly shootings at Kent State University and Jackson State University in 1970.

What can colleges do?

First, I believe institutions must examine their current policies and practices regarding campus safety, policing, surveillance and student discipline through an abolitionist view, which envisions other ways to repair harms instead of relying on police or penal institutions.

Relatedly, the experiences and voices of students — especially racially marginalized students — must be heard and prioritized in this review of campus safety policies and practices. Students from all over the country have demanded reforms to policing on campus, such as reallocating resources away from campus police departments or having campus police not be armed. If institutional leaders were serious about making changes, they would make sure to hear and learn from those who are most affected by these policies.

Lastly, I believe higher education must begin to redirect funding for campus police toward other programs and services that keep students healthy and safe, such as mental health services or organizations that push for alternatives to police and prisons.

Author Bio: Jarell Skinner-Roy is a Doctoral Student in Higher Education at the University of Michigan