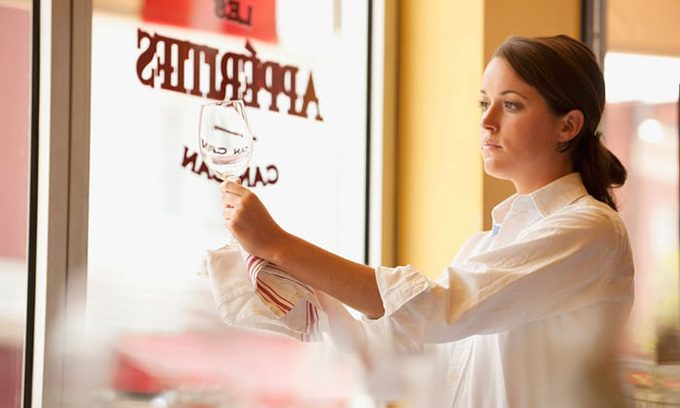 Employer: “Kid, everyone has a high school diploma. What else you got?”

—over a century ago, a high school diploma meant something, but this is what it’s worth today.

Part of what made a college degree valuable was scarcity—not everyone had one. Once government made high school “free” for everyone, our kids left high school to go get a college degree, and we opened up our campuses to everyone. A natural consequence of sending everyone to college is degrees are commonplace now.

So now we have a bunch of college graduates going out in the world, being told their degrees are worthless…and heading back to school to get a more advanced degree—this lets them delay payments on the student loans, if nothing else. Alternatively, they could flee the country or become prostitutes, but for the sake of argument let’s assume these aren’t good options for everyone.

Today, I applied extra lipgloss, perfect eyeliner, and blow-dried my hair. I went to ask a restaurant manager for a waitressing job. You see, the stakes are high – I’m desperate for even a minimum wage job…

…I have degrees in economics, sociology and politics, research skills in qualitative and quantitative methods, teaching experience at universities, a decent publication record, and a significant conference list of presentations. But now I need lipgloss and cafe connections to get a job.

All those years in school, paying for that precious, precious, education, and it amounts to no more than a high school diploma at the end. A Ph.D. is a research degree. It has some usefulness in “the real world,” but mostly it’s for places which only care about research, i.e., universities. Thus, the “real world” isn’t going to pay for it:

Employers external to the university don’t want a PhD, they want five years of industry experience. Other employers consider me overqualified for basic research tasks. They don’t want to pay the higher rate of employing a PhD.

I got the “overqualified” line too when I tried to get a full time job in the real world, endless government harping about the value of a mathematics degree notwithstanding.  Now, don’t get me wrong, studying mathematics as an end was fine for me, I’m ok with being “trapped” in higher education, and I can still get contracts even if I’m overqualified for real work.

The problem here is bigger than just the huge glut of Ph.D.’s we’ve created with our inflated education system. I’ve mentioned before about how our academics are being exploited in the massive teaching system, where they bring in millions of dollars via tuition for classes…while getting paid pennies.

They also get exploited in a different way:

The truth of it is what the university doesn’t tell you. You learn along the way that research, including that produced by PhDs, brings in cash for universities. More PhDs are beneficial for an institution reliant on government funding. But they compete on graduation for fewer jobs in what was an already competitive field. The time spent on producing our PhD effectively renders our previous degrees useless – no graduate employer wants a degree from four years ago.

All those graduating Ph.D.s generate research which the (state) school uses to get more government money, but that too goes to admin, only a few percent of the tax loot trickles down to the people doing the actual work.

In Australia, where I study, the emphasis on research production increased….

Those wishing to retain an academic job were required to conduct their research in their own time, without a funding budget to support it.

The incredible emphasis on research production is why we have massive frauds in research publishing now, with very clear evidence that wide swaths of research in medicine and psychology are quite fake, and it’s almost certain any field which uses (easily fabricated) statistics also has a huge fraud problem. I assure the gentle reader the reason for this is admin determines the validity of research now, and not academics…and we honestly don’t care about lying to an administration which lies to us at every turn. They don’t know anything about research, and so have no means to determine frauds.

Since the author has given up on academia, she’ll confess to things every other academic who’s had enough of higher ed confesses to:

The pursuit of more funding is also evident in the way universities chase more student enrolments, perpetuating the notion that a degree will guarantee a good job in spite of the oversupply of education. Students are encouraged to select specific majors which will benefit the university. I’ve been requested from the higher ups to grade on a curve since easy grades encourage retention, and I have been prevented from failing students.

–is anyone else concerned that everyone in higher ed makes these complaints, complaints that can only occur in institutions without integrity?

We really, really, need to reconsider having higher education run by pseudo-academics, self-proclaimed titans of industry who only concern themselves with growth at all costs, who view our kids as mere sources of revenue, and who view the academics as even more sources of revenue.

It’s truly fascinating watching our institutions turn into Marxist utopias. First the lowest level workers get exploited as much as possible…but as the money runs out, the system moves further up the ladder looting as much as possible for the people at the very top of the system. Always, however, these systems collapse as they destroy their own base.

The hardworking Ph.D. finishes her essay with a rant:

More perniciously, my mentor also considered that all academics are already aware of the failures of the system, the exploitation that occurs, and the mental health crisis that accompanies it. Aware, and yet so embroiled in the system that action is not only not taken, but actively discouraged in favour of adhering to the status quo.

So, here I sit, a disgruntled graduate of the system. A PhD turned waitress.

Naturally, the waitress makes her complaints and observations anonymously, because that’s another feature of Marxist utopias: you can’t speak out, lest you be considered an enemy, and be destroyed.