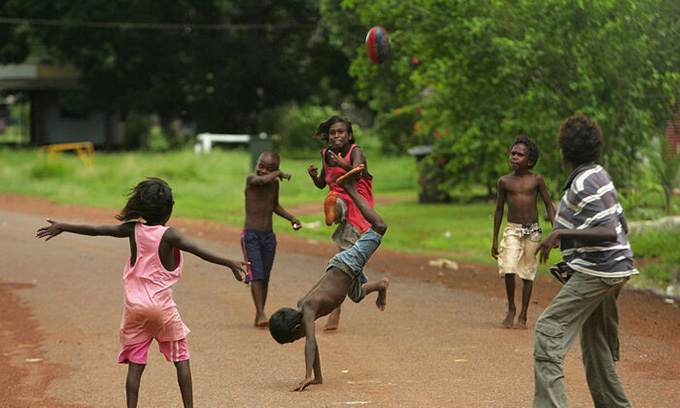 TIWI ISLANDS, AUSTRALIA – DECEMBER 22: Children play football on the street on December 23, 2007 on the Tiwi Island, Australia. Australian Rules football holds a special position in the lives of people of the Tiwi Islands, which are located just off the coast north of Darwin. At present about 500 or 20% of all Tiwis play in regular football competitions arranged for boys and girls, men and women on both Melville and Bathurst Islands. The Tiwi Islands Football League, which is played during the northern wet season of October through to March, began in 1969. It currently has seven teams, and the grand final in the end of March is one of the largest tourism events in the North. Like Aborigines throughout Australia, the arrival of people to the Tiwi Islands dates back more than 50,000 years. Unlike Aborigines elsewhere in Australia, the Tiwis were spared white incursions onto their land and have retained complete control of their home islands of Bathurst and Melville to this day. (Photo by Ezra Shaw/Getty Images)

Of the world’s 7,000 languages, it is estimated 50% to 90% will no longer be spoken in the next 50 to 100 years. The majority under threat are languages spoken by Indigenous peoples around the world: one is lost every two weeks.

More than 250 Indigenous languages and over 750 dialects were originally spoken. However, as some experts estimate, only 40 languages are still spoken, with just 12 being learned by children.

First Nations educator Jacquie Hunter, who contributed to this article, has worked at One Arm Point Remote Community School in Ardiyooloon in Australia’s northwest for 17 years. She told us “kids know words, but not sentences” of their Bardi language. She estimates within the next few years, “we won’t have any more fluent speakers around to teach us those full sentences in our language”.

This is a pattern repeated in Indigenous communities nationwide.

It aims to draw global attention to the critical endangerment of indigenous languages, and engage stakeholders and resources for their preservation, revitalisation, and promotion.

Loss of language has significant impacts on Indigenous communities

The United Nations Permanent Forum on Indigenous Issues, has noted how the threat to languages is a direct consequence of “colonialism and colonial practices that resulted in the decimation of indigenous peoples, their cultures and languages”.

These involved policies of dispossession and discrimination. This is further exacerbated by globalisation and the rise of a small number of culturally dominant languages, such as English.

More than 4,000 of the world’s languages are spoken by Indigenous People. With their disappearance, we will see a loss of linguistic diversity, and diverse cultures and worldviews. Important connections between Indigenous languages and cultural identities may also be broken.

The relationship between language and culture is complex. Cultural values and ways of thinking can still be conveyed via a new language — an example is found in Kriol (an English-based contact language with features from Aboriginal languages). Nonetheless, in many communities, language and culture are closely intertwined. As Jacquie Hunter also told us, “We have our culture, a strong culture – but without language how you supposed to keep it going?”

Language is also key to sustainability. Local languages are crucial for collaboration with local communities. And loss of Indigenous languages means loss of much traditional ecological knowledge, including strategies for sustainable living.

This holds the key to natural resource management, such as cultural burning in fire management. But such knowledge risks being lost if Indigenous languages do not continue being passed down to the next generation.

What role does education play?

Yet schools can provide rich environments for supporting diversity. Australia has seen some promise here in recent years.

Aboriginal language programs from pre-school to year 12 are developing in all states — Western Australia and New South Wales are good examples of this.

A 2022 poll of about 650 primary school students found they wanted to learn an Indigenous language – ahead of other, foreign languages.

Schools like One Arm Point Remote Community School in WA integrate traditional culture and knowledge into the curriculum through the inclusion of Elders, rangers, and community members. Students create material in the Bardi language, Australian English and Aboriginal English. One outcome was the national award-winning book Our World: Bardi Jaawi Life at Ardiyooloon.

What can we do in the Decade for Indigenous Languages?

For decades, linguists have been documenting Indigenous languages alongside community, creating digital archives, and producing learning resources. A good example is the Bardi app. But teachers and students want to “listen with our ears to the Elders speaking it”, as Jacquie Hunter explains.

The demand for Indigenous language teachers has been a longstanding issue. In recent years, more funding has been allocated. The new federal government has pledged A$14 million over the next three years, to bring First Nations teachers to around 60 schools. In remote Aboriginal schools, like One Arm Point, funding could be used to bring Elders and resources into the school to keep the language going.

We’re excited the new @AlboMP Government promised to fund 60 new First Nations Cultural Educators to share their language and culture in primary schools across the nation. It’s a great start. Let’s make sure it happens (and expands!) #knowyourcountry https://t.co/YR40wPsXt2 pic.twitter.com/uwDDZAtaJW

Linguistics researchers also play a role. In collaboration with local schools, we want to work with teachers and students to research the situation of Indigenous languages and ways to broaden their use to protect them from being lost.

We also want to look more at how Aboriginal English and Kriol, as well as using more than one language, can be more valued in the classroom.