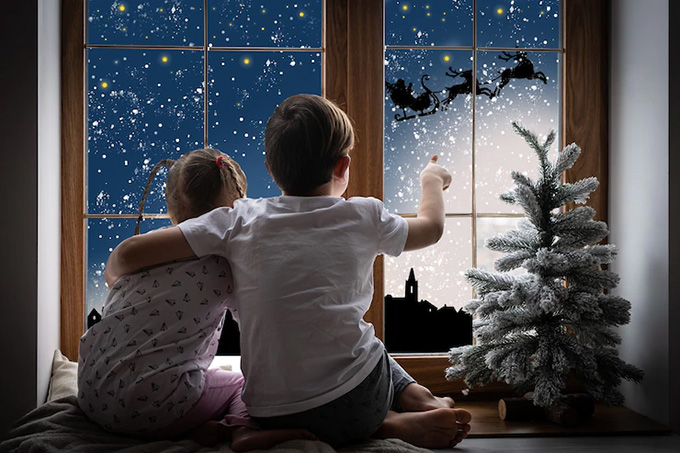 For many children, the arrival of Santa Claus is the high point of the December festivities. But do they really believe that a man with magical powers travels the globe to bring them their gifts?

If they believe it, isn’t that proof of their gullibility or their inability to distinguish between fiction and reality? To put things in perspective, however, imagine for a moment your reaction to the following scenario.

For several days, television news has been broadcasting reports on an unidentified individual who breaks into homes where he steals the car keys before leaving behind the wheel of the vehicle. The culprit would leave no traces, except those of boots full of mud on the ground.

One morning when you wake up, you find traces of mud in your home, you notice that your car keys have disappeared. You rush to the window and find that the car is no longer there. Immediately, you tell yourself that the stranger you heard about on the news has paid you a little visit. A few minutes later, you receive a call from your roommate, a rude guy, who explains that he wanted to walk to work, as usual, but it was raining so much that he came home. in the apartment with his dirty shoes and borrowed your car for the day.

From commercials to adults, everyone is striving to perpetuate the Santa Claus myth . The parents themselves take their offspring to shopping malls to meet a guy in disguise who takes the child on his lap to recite his gift list. On Christmas Eve, they scatter irrefutable proof of the existence of this character around the house: scraps of biscuits and a half-empty glass of milk that the children will find the next morning and, most importantly, the presents under the fir.

So, if the children believe in the existence of Santa Claus, it’s not because they are more gullible than you, but because we encouraged them to do so. You yourself, faced with similar evidence, would have been able to deduce that a criminal had entered your home to steal your car keys. Indeed, children are sometimes more skeptical of allegations and claims than adults.

Adherence to the story of Santa Claus particularly piques the curiosity of the researcher specializing in the beliefs of children that I am. I am interested in the representation they have of others, their spirit, and their conception of the extraordinary. Research on the cognitive development of children allows us to enter the fascinating story – and more nuanced than is often imagined – of this annual belief.

Admitting the existence of Santa Claus is one thing. But do children really believe that Santa Claus can do everything their parents and other adults tell them? That he can circle the earth in one night on a reindeer-drawn sleigh and bring them all presents? Or that he knows if they’ve been nice or mean in the past year?

This is where the story gets more interesting and nuanced. These beliefs depend in fact on the conception that children have of the world, and these representations evolve in a spectacular way during childhood.

For example, there are considerable individual differences between children and changes in their way of considering the notions of planet Earth , time and speed in children.

If a young child believes that the Earth is small or has few inhabitants, a mass distribution of gifts by Santa Claus in 24 hours does not seem so far-fetched to him. There are also big differences in how children think about their minds . Young children, in particular, find it difficult to picture someone who is omniscient, knowing their every thought and every move they make . In kindergarten, for example, they are inclined to believe that Santa Claus has an exceptional mind, that he can know things that most other adults don’t, but not everything.

Thus, the little ones generally believe that Santa Claus exists, but in a more mundane form than what adults let on.

Yet even in cultures where tales of Santa Claus and physical evidence of his existence are ubiquitous, most children eventually realize that he doesn’t exist. What their buddies say can slowly erode their belief. They can also surprise their parents who are enjoying cookies from Santa Claus or placing presents under the tree.

Moreover, as children become aware of the extent of the powers granted to Santa Claus – when they become aware, for example, of the distance he must travel and the number of houses he must visit in one night – they begin to question its supposed qualities and end up doubting its very existence. Around the age of eight , most don’t really believe in it anymore .

So why do they continue to participate in this annual ritual? Why do they pretend like Santa really exists and give them presents because they’ve been nice (which goes without saying)?

The answer is simple: because it’s fun. It’s a bit like imaginary friends. Children who have them know they’re not real, but they pretend to play with them and talk about them to those around them because it’s enjoyable and rewarding fiction. Considering that Santa Claus is real has an added benefit since he brings them toys every year! When older children indulge in this mythology, they play along with the adults, who themselves enjoy this pretense.

Does this lie have consequences for children? Do they lose the trust they had in their parents when they discover that they have set up such a sophisticated scheme?

Few studies directly answer these questions. One of the few who asked children about their reactions revealed that they experienced more positive than negative emotions when they learned of the existence of the myth, whether they discovered the lie themselves or from the mouth. of their parents.

If we consider that children are able to understand that it is a game and that they pretend without their parents realizing it, and if we consider that all this fiction takes place in a context of pleasure and conviviality, then there is probably more to gain than to lose.