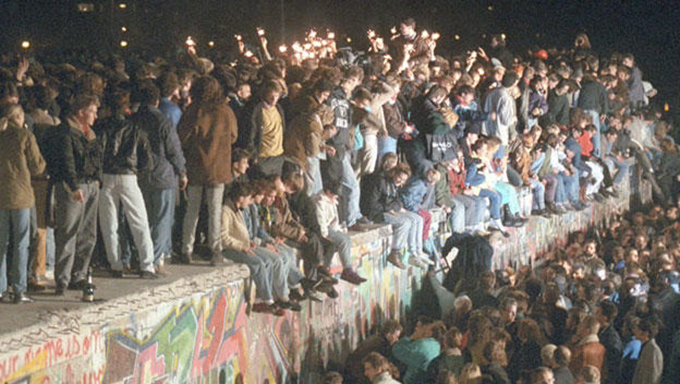 When the Berlin wall fell 30 years ago, on November 9 1989, it marked the end of a 40-year divide between Germany’s communist East and the free market system of the West. For people living either side of the wall, this split led to differences in many areas of life, including education. So while the West German system sorted children into different schools from an early age, based on academic achievement, East German children attended comprehensive school until they were 16 years-old.

Most of these children in East Germany would then join the workforce and enter a job training programme, although a small number of students were allowed to continue in upper secondary schooling and onto university. As equality was a stated aim of socialist countries, East Germany prioritised working-class children in this process.

In West Germany the selective system meant that only those children considered most academically capable were able to complete what’s known as the “Abitur”. These are exams equivalent to A-levels. Students needed (and still need) to pass these exams to be able to go to university.

The move to one system

In 1990, the German Democratic Republic (the former East Germany) reunited with West Germany – and, as part of that reunification the east agreed to an economic, social, and political union that saw them adopt West German systems. In education, this meant using West Germany’s system of early ability tracking. This did not allow for “positive discrimination” of working-class children.

In our recent study, published in Sociological Science we wanted to look at how the two education systems compared. We were especially interested in how a child’s family background influenced their educational attainment in both the West and East German education systems.

Existing evidence from former socialist countries shows that once a free market economy is in place, people are less socially mobile. That is, their occupations are more likely to mirror those of their parents.

In our study we looked at the long-term trends in educational inequality across East and West Germany. To do this, we used data from three large-scale surveys on the family background and educational attainment of Germans born between 1929 and 1993 – this includes people in the education system long before and after German reunification. Specifically, we looked at the successful completion of the Abitur by both parents and their children.

As time went on, the East German state enforced “positive discrimination” to a lesser extent. Those who benefited from this process became part of the socialist elite and wanted their children to be equally successful. This meant that over time, educational inequality also increased throughout East Germany.

As a result, East Germany was increasingly unable to provide equal educational opportunities or fulfil its aim of a fair society. Nevertheless, educational inequality remained at a lower level in East Germany than in West Germany before reunification.

Perils of the selective system

After the fall of the Berlin Wall – when West Germany’s selective systems were adopted on a wider scale – educational inequality in East Germany increased to West German levels. So the gap between children from higher and lower educational backgrounds in attaining the Abitur became strikingly similar in both East and West Germany.

It seems then that transforming a comprehensive school system into a selective school system increased inequality. This is a finding that echoes other research in this field. The reason for this is likely down to highly educated families in the former East Germany seizing new opportunities and freedoms presented by the fall of the Berlin Wall. In the newly established selective education system, they made immediate use of their resources and knowledge to improve their children’s prospects.

Research in England has also shown that the attainment gap between children eligible for free school meals and those who are not is wider in selective areas.

Our study supports the idea that comprehensive schooling is better suited to tackling educational inequalities than selective education – as education systems that offer many educational choices may always favour middle-class families.