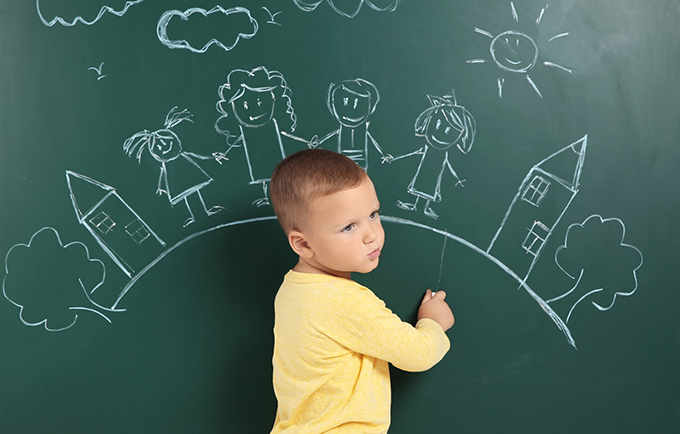 The practice of philosophy with children has been developing all over the world for more than 50 years. The stakes are multiple and go far beyond the need to democratize the teaching of philosophy upstream of the Terminale class. It is a question of developing critical thinking from an early age, of cultivating complex thinking and the acceptance of one’s vulnerability in the face of major universal and timeless questions.

This practice promotes dialogue and the enlightened acceptance of differences, requiring rigorous intellectual work. In this sense, it participates fully in the political missions of the school and can contribute to the formation of enlightened citizens.

The precursor of research on philosophy with children, Matthew Lipman , was a disciple of John Dewey, one of the founders of “pragmatism”, defending an emancipatory philosophy, at the service of democracy and anchored in reality, based on the model of inquiry and scientific process.

John Dewey challenged a technicist vision of democracy (as the only formal mechanism) and considered it rather as a way of life: that is to say as a dynamic set of skills and habits to conduct oneself, to speak to one another and to deliberate with each other. Hence the idea, with Matthew Lipman, of creating in classes with very young children what he calls “Communities of Philosophical Research” (CRP) which would be an enactment of this conception of democracy.

In these workshops, like inside a laboratory, the children, usually seated in a circle, face to face, will formulate questions and evaluate the ideas put forward. Starting from a problem (for example “what is a just law?”), the children are invited to formulate hypotheses, to deduce presuppositions and consequences, to justify their opinions, to collectively evaluate the rational and ethical validity of the different propositions. They patiently develop – thanks to rigorous support from the teacher – a way of thinking that aims to be critical, vigilant and creative at the same time.

We can thus see how, in its very foundations, philosophy with children aims to develop thinking skills and human qualities that are at the heart of the humanist and democratic project: to form free and autonomous subjects, capable of exercising their critical spirit, of to deploy rational, ethical and complex thought, to recognize their fallibility in the face of these great questions which cannot find a single and definitive answer, but also to promote a certain ethic of relationship to oneself and to others. In this sense, philosophy makes it possible to fight against the two intellectual drifts of post-modernity: the relativism of opinions and the dogmatism of beliefs.

In France, in the 1970s, Jacques Derrida and the GREPH were already calling for “philosophizing outside the walls” , to invent a philosophical practice before Terminale but also outside of school. But it is only for about thirty years that we observe a generalized interest in these practices in the French-speaking world: multiplication of experiments in the classes, creation of networks of teachers and researchers, conferences where the actors meet of this network , publication of articles in newspapers and magazines, success of collections for children (“Les Gouters Philo” published by Milan, or the collection “Les Petits Platon”), training for teachers, dissertations and theses on the subject and since 2016 creation of the first Unesco Chairon these practices supported by the University of Nantes.

The introduction into French elementary school programs from 2002 of “debates” or “regulated discussions” and an ambitious literature program have made it possible to institutionally legitimize these practices in classes.

We distinguish three main purposes of philosophy with children to which correspond three main schools in which practices can be placed:

These three issues are obviously complementary: doing philosophy with children requires both laying the foundations of an ethical relationship with them, being also convinced of the political urgency of forming enlightened citizens and finally wishing the democratization of the discipline.

It is therefore not because the exercise of philosophy would ultimately be easy that one could practice it with children, but it is on the contrary because it is difficult that one must start early. If we want a real democratization of its teaching, we must be able to offer all students, and as soon as possible, the linguistic and cultural tools that will enable them to meet its specific requirements.

Without evading the political and social causes of school difficulties, without demagoguery or elitism, only familiarization and early learning with the rigor of reflection can perhaps allow this bet to be won.

(Children’s) literature, a place to think

Literature is a privileged medium for learning to philosophize. Indeed, the child, in the stammerings of his reflective thought, does not know, cannot get out of his subjectivity, and his experience of the world is necessarily limited. It is thus necessary to offer him the means to refine his reasoning and to emancipate him from his sole point of view.

Literature undeniably allows this decentration. Because literary fiction – far from betraying and distorting reality – reveals it at its deepest. It establishes a bridge between the singular experience – which, by its too intimate character and charged with affects, prevents taking a step back and analysis – and the concept – which, by its coldness, can harm the involvement personal. Fictions place the philosophical problem at a “good distance”: between the excessive proximity of personal experience and the abstraction of the concept. Thinking from fictional characters (and not from one’s own experience) allows the emotional distance necessary for philosophical exercise.

In the second half of the 20th century, Paul Ricœur rethought the concept of literature and  its close links with philosophy. Literary fiction – because it represents the multiplied possibility of exemplary and significant experiences on the truth(s) of the world – allows us to think about the human condition in all its complexity. Freed from the constraints of empirical reality, the laws of physics, and even the laws of morality, fiction allows me to live by proxy what reality, alone, will never allow me to live: writer and/or reader, I can commit murder, and, as in Crime and Punishment , experience the torments of remorse from within. I can become invisible, like the shepherd Gygesof Plato’s myth, and experience the infinite possibility of the transgression of the law and the rules of Good and Evil.

Literature thus reveals to us a certain form of truth about reality. While we wanted to escape the world by immersing ourselves in reading a novel, this same fiction brings us back to our own reality by giving us to see it in another light. A beautiful escape into the imaginary world brings us back to reality, a reality revisited in the light of this fiction which has upset the order of our certainties: “The thought experiments that we conduct in the great laboratory of the imaginary are also explorations carried out in the realm of good and evil”, wrote Ricœur in Oneself as Another .

Contemporary children’s literature is today of great literary and philosophical richness and is also betting on the intelligence of very young readers. Taking into account the metaphysical questions of children thus seems to be a major trend in contemporary children’s literature. There are many authors, such as Tomi Ungerer, Claude Ponti, Kitty Crowther, who offer their young readers subtle, poetic and intelligent stories that invite reflection.

The establishment of moments of Philosophical Research Community at school and in the city (as in libraries) thus gives substance to what Hannah Arendt called “oases of thought”, that is to say the creation times and spaces cut off from the busyness of the world where participants can take some distance to calmly think together about the issues of existence and life in society. In this sense, these “oases” can support the processes of emancipation, recognition and “resonance” with oneself, with others and with the world, as understood by the German philosopher Hartmut Rosa. The issue of philosophy with children is therefore not only didactic or pedagogical but fully political in the noblest sense of the term.