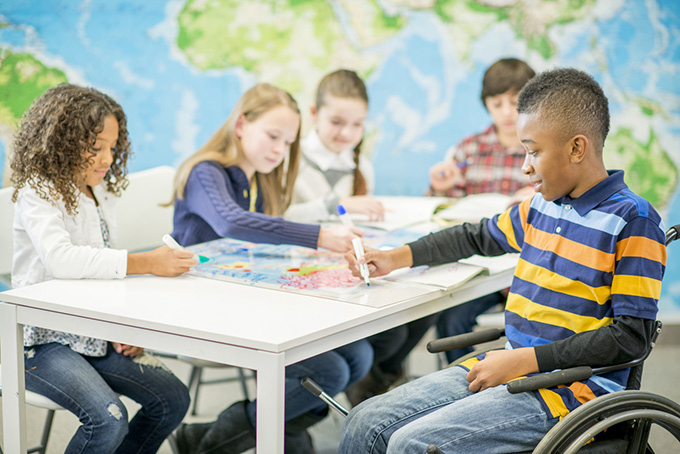 This week, the disability royal commission is looking at the experiences of children and young people with disability in different schools across Australia. This includes mainstream schools as well as so-called “special schools”.

An estimated 10% of school students (aged 5–18) in Australia have a disability, although this number is much higher in some states. Most of these students (89%) attend mainstream schools, but an increasing number of students with disability and their families are choosing special schools.

Research suggests children fare better in inclusive mainstream settings. So why are more students being enrolled in special schools, and what can we do about it?

Every child has a right to education

Internationally, it is recognised that every child has the right to education. The Convention of the Rights of People with Disability, to which Australia was one of the first signatories, says children with disabilities should not be excluded from free and compulsory education on the basis of disability.

As a result, education systems need to think about what inclusion means, and how to achieve it.

"We are the same in many ways. For example, we all love someone, we all have dreams, we all need to be treated fairly. We all have things we like to do, places to go. I go to school and do my homework like everyone else.’ – Bas, aged 12 #DisabilityRC pic.twitter.com/1Ws0G0bdJ3

The term “inclusion” was first universally advocated for students with disability in the 1994 UNESCO Salamanca Statement. This said integration of children with disabilities could be possible through inclusive mainstream schools.

Various legal provisions in Australia, for example the Disability Discrimination Act, the Education Act and the Disabilities Standards for Education aim for inclusion of students with diagnosed intellectual, physical, sensory or learning disabilities into mainstream classes.

However, nationally there is no agreed definition of inclusive education and no countrywide legislation that mandates it.

Why do we still have special schools?

Special schools aim to meet the needs of students with disability by providing support and adjustments away from mainstream classrooms.

Disability and education advocates argue special schools are a form of segregation and go against students’ human rights. However, some state governments continue to promote special schools alongside the mainstream system, arguing this still qualifies as “inclusion” in learning.

Some parents also feel they have no option but to enrol their children in a special school. The disability royal commission this week heard stories such as that of “Isabella”, a South Australian mother whose son “Emerson” has autism. Emerson went through four mainstream schools in his first 18 months of schooling?.

Some mainstream schools discourage children with disability enrolling by rejecting enrolment based on their disability label, making them feel unwelcome, or making it clear they can’t offer adequate support. Students with disability also face higher levels of bullying than their peers and are expelled from schools at higher rates.

Research shows parents will choose a special school for safety and smaller class sizes, and teachers who have adequate, specialised training. We also know teacher training is a significant issue. Research indicates only 38% of Australian teachers feel equipped to teach students with disability.

The benefits of inclusion

But the evidence suggests students with disability do better in the mainstream system – this includes developing stronger academic skills. For example, the language skills of preschoolers with disabilities improve when they can interact with their peers without disability in the same classroom.

While special schools are often seen to be more cost-effective – they consolidate specialist trained teachers in one place – there is evidence the opportunities for academic advancement and opportunity are not adequate.

"It was seen to be a better solution to hide and to isolate disabled students, many of us who were already experiencing a lot of isolation, to prevent bullying than what it was to educate our peers and reprimand bullying and harassing behaviours." – Gi Brown #DisabilityRC pic.twitter.com/4h6pz0UI78

Students with disability who go to mainstream schools are more likely to enrol in post-secondary education, to be employed and live independently. According to one research review, students in mainstream schools also tend to have better social skills.

Meanwhile, all students who are educated in inclusive classrooms hold less prejudicial views and are more accepting of people who are different from themselves.

What needs to change?

The Australian Coalition for Inclusive Education is a national coalition of disability advocates and organisations. It has developed a ten year plan  for inclusive education in Australia.

A move towards a one-stream system in Australia will need input from students, parents and carers, teachers and leaders from both special and mainstream schools.

We also need agreement about what “inclusive education” means and significant training and funds to move the expertise and resources in special schools to mainstream settings.

This has been done elsewhere.

In countries like Italy there is a one-stream system but, notably, students with disabilities spend 20–50% of their time outside the regular classroom or in support rooms with support teachers. In other places, such as parts of Norway, special education teachers and mainstream teachers are co-teaching in the same classroom with success.

What can the royal commission do?

This week is the disability royal commission’s third hearing into education. It is due to hand down its final report in September 2023.

"I wasn't allowed to be a kid because I was constantly monitored. Rather than help me be included, the teachers' aids became a segregation in themselves because no one wanted to be around a teacher 24/7." – Brittney Wilson, aspiring advocate #DisabilityRC pic.twitter.com/AQccvGj0Wn

When it does, it needs to recommend that students with disability have the funds and supports to be educated alongside their peers without disability.

This needs to be supported by national and state governments and by school leaders and classroom teachers.

This will mean making sure the expertise in special schools is moved to and expanded in mainstream schools. Along with teacher training, it will likely require smaller class sizes as well as time for teachers to work with specialist support staff and primary carers.

All this should be done alongside the students themselves – to help them have a say about what they need and how they best learn. Meanwhile, we also need to ensure students with disability make and maintain friendships that will help them in the classroom and support them beyond it.

Author Bio: Catherine Smith is a Lecturer, Graduate School of Education at The University of Melbourne