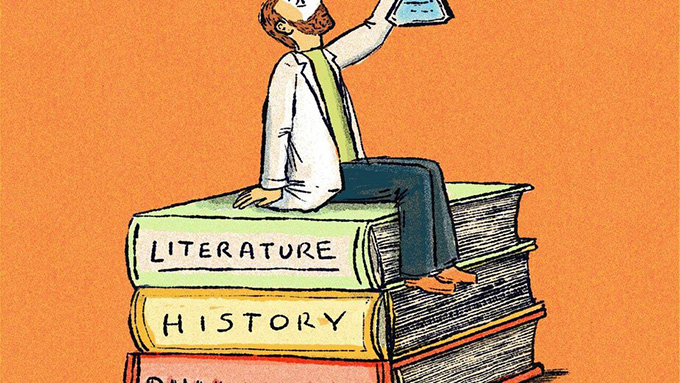 “The foundation of democratic and liberal societies is the critical spirit, which is nourished by knowledge of the humanities. Without exception, totalitarian states reject the teaching of the humanities , and states that reject this teaching always become totalitarian”. These were the words of Takamitsu Sawa, then president of Shiga University in Japan, in 2015 in response to a statement by Prime Minister Shinzo Abe who believed that higher education should exclusively “produce human resources that correspond to the needs of society”. .

The key criterion making it possible to arbitrate between these different pairs would be their supposed short-term “usefulness” on the labor market; a reasoning long shared in the Anglo-Saxon world. As proof, only 8% of American students today follow a major in the humanities, compared to 17% in 1967 . History, literature, philosophy, languages, are disciplines losing momentum on the grounds that they are decorrelated from the needs of professional life.

A request from employers

It should be noted that states such as Brazil , Japan or the United Kingdom (through the Research Excellence Framework ) have also not hesitated to reduce the share of humanities in higher education, considering that they lack “d ‘impact’ both in terms of research and employability. The humanities appear, as a result, as more and more forced to justify their existence – when they do not have to fight for their survival in higher education.

And yet, a paradox that should be emphasized, today it is employers who defend the humanities  : in fact, 80% of them believe that “all students need a solid foundation in liberal arts ( liberal art )”. This common expression in the Anglo-Saxon world designates the basic disciplines such as mathematics, social sciences, history, philosophy, physical and life sciences and artistic disciplines. The humanities are therefore a subset.

It is interesting to recall that the teaching of the liberal arts was born in the medieval university  ; it was sanctioned by a diploma, the “bachelor of arts”, which allowed to exercise an intellectual job or to continue his studies in a specialized field: medicine, law or theology. This model of a general and cross-cutting bachelor’s degree, possibly followed by a specialization, migrated from France to England and then to the United States. By a curious historical paradox, this pedagogical model is now returning to its country of origin. It should be noted in passing that it has persisted in France, under another name, in the model of preparatory classes, many of which combine literary and scientific teaching, in particular those which prepare for the top management schools!

He believes that “the United States will lose its competitive edge” if it takes the simplistic approach that STEM education is the only path to economic success. Moreover, the founder of Apple Steve Jobs was not mistaken when he declared, during the launch of the iPad in 2011:
“At Apple, technology alone is not enough. It is the technology coupled with the liberal arts, the humanities, which gives the results we are delighted with”.
The humanities are an essential complement to professional skills, and this in three ways. First, the humanities make it possible to acquire lasting skills , unlike technical and technological knowledge. A recent article published in the journal Nature highlights these achievements: critical thinking, spirit of synthesis, open-mindedness, plurality of points of view… in short, general culture. Conversely, technical knowledge is becoming obsolescent quite rapidly. This is why, as Harvard researchers David J. Deming and Kadeem Noray have shown, the wage premium for STEM graduates is highest when entering the labor market. On the other hand, hedecreases by more than 50% during the first decade of working life due to the obsolescence of acquired skills.

Furthermore, the liberal arts and humanities promote the development of all kinds of skills and, in particular, ”  soft skills  “, i.e. social, emotional or behavioral skills that do not come under a academic or technical education. This is why they are today acclaimed by employers. A 2018 study conducted by the Association of American Colleges and Universities, titled Fullfilling the American Dream: Liberal Education and the Future of Work , found that the skills most valued by employers are precisely those taught in humanities courses: written and oral communication, critical and creative thinking, ethical judgement, ability to work in a group, etc.

However, this same report reveals that there is a gap, sometimes huge, between the achievements of young graduates and the market needs identified by human resources managers.

In other words, a certain number of non-technical skills that are essential to the conduct of work are today sorely lacking in young graduates. This lack is all the more damaging as current students will have to change jobs on average 12 times during their careers . Under these conditions, mastering basic skills, which by their very nature escape obsolescence, is the best passport to adaptation.

Finally, a third argument pleads in favor of the study of the humanities and the liberal arts: these disciplines, by introducing them to complexity , prepare those who study them to apprehend a world that is increasingly uncertain and at the dawn of major changes . in particular with the upcoming energy transition.

All of these elements explain why, according to David Deming , at age 40, former STEM graduates have an average annual income of approximately $124,000 compared to $131,000 for those who studied social sciences.

A final point deserves mention. Although it may be doubted that emphatic feelings are always converted into altruistic actions, economists , philosophers , sociologists , anthropologists , and even primatologists agree in recognizing that empathy is a fundamental condition, the “invisible second hand”, which ensures the stability of our societies. The liberal arts, which are by definition interested in the human, can thus make it possible to increase the desire to live together by facilitating the discovery of those we ignore, in all their complexity and diversity.

Ultimately, humanities and liberal arts are neither extra soul nor disciplines that should be minimized in the name of their supposed low employability. On the contrary, not only do they increase the professional skills of those who master them but, when implemented, they contribute to strengthening the common good. Double reason which explains why it is necessary, urgently, to reverse the tendency and to put them forward, in particular in the establishments of higher education which form part of the elite of tomorrow.