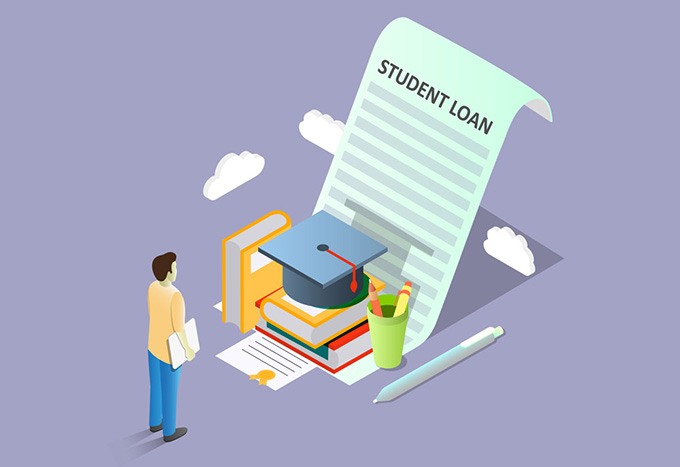 Paying back student loans is not an easy thing to do. One out of every 5 borrowers with outstanding student loan debt has fallen behind their payments.

There are several ways borrowers can get help to deal with their debt burden. Bankruptcy is the most extreme. In general, the law does not allow you to get rid of student loans through bankruptcy. One exception to the rule is if a borrower can prove that paying back the loans “would impose an undue hardship on [them] and [their] dependents.” The threshold for proving that is pretty high. Plus, there’s not a lot of legal guidance on what precisely an undue hardship is.

Not many people try to get rid of student loans through bankruptcy. It could be because they either don’t know its an option or don’t think they will prevail. One study found that only 0.1% of student loan borrowers who have filed for bankruptcy tried to discharge their student loans. Among those who do try, the success rates are high. Nearly 40% of borrowers who challenge their student debt receive at least a partial discharge.

The U.S. Supreme Court has not yet weighed in on what exactly makes for an “undue hardship.” However, most federal courts follow the 1987 Second Circuit decision, Brunner v. New York.

Of these three prongs, the first is the most important. Typically, a borrower has to show they have both maximized their income and reduced their expenses to cover only basic needs.

As an example of failure to maximize income, consider the case in which a bankruptcy court ruled against a borrower who had taken on debt to attend law school. Although she provided evidence that her mental health made it unlikely that she would ever become a licensed attorney, the court found that, considering her education, she had not pursued other gainful employment, like paralegal work, to earn as much as she could.

Borrowers may find it difficult to prove that they’ve done everything to minimize expenses. Courts have found even a monthly cable TV bill as low as US$35 to be excessive in light of unpaid student loans.

A borrower’s age and disability status are also factors a court would consider as influencing a borrower’s expected earning capacity. At the same time, borrowers who obtain loans later in life cannot rely on their age as “additional circumstances.” But, if a borrower becomes “totally and permanently disabled,” the Department of Education must discharge their federal student loans upon application without resorting to bankruptcy.

If borrowers meet the first undue hardship criterion, then they must show that the hardship condition is likely to last for the rest of the repayment period. As a judge explained in a case known as In re Roberson, because student-loan agreements rely on the borrower’s future income, discharge requires a “certainty of hopelessness, not simply a present inability to fulfill financial commitment.”

Finally, the court must evaluate a borrower’s “good faith” efforts to pay their student-loan debt. Good faith efforts include showing that you’ve been in regular contact with the loan servicer or tried to get your payments suspended for a brief period. Good faith efforts could also include having tried different repayment plans and making some payments on the loan, even if those payments were below the amount owed.

If a court finds you have met all three Brunner criteria, it may grant a full or partial discharge of the student loan. A court could also decide to just relieve a borrower from paying interests or fees. Or, a court could let the borrower pay small payments now and bigger payments later with the idea that the borrower will be making more money in the future.

Satisfying all three conditions may be challenging. Other, more accessible forms of relief exist. If the financial strain is temporary, a borrower may be eligible for options known as “deferment” or “forbearance.” Both deferment and forbearance suspend the required student-loan payment for a limited time period but do not get rid of the debt.

In order to qualify for a deferment, you need to meet certain criteria, such as having enrolled in college or being unemployed. Forbearance, on the other hand, can be requested for a broader range of financial difficulties. Deferments last for as long as the qualifying situation, but a forbearance is limited to 12 months. Deferments must be granted, but a forbearance request can be denied by the loan servicer.

Another option to reduce the monthly payment amount is pursuing an income-driven repayment plan. These are typically only available for federal student loans.

Although eligibility differs across four different plans, most borrowers are eligible to enter the REPAYE plan. Each plan bases the monthly payment on income and can lower payments, even to zero dollars in some cases. Under REPAYE, the monthly payment is defined as 10% of discretionary monthly income. Forgiveness for all four plans is offered after making payments for 20-25 years, although borrowers working in the public sector, such as a teacher, or employee at a not-for-profit organization, may qualify for forgiveness after 10 years of payments.

You may have heard that most people who apply for public service loan forgiveness are rejected. While this is technically true, government data show that the majority of applicants had not yet completed the required 10 years of repayment, and another quarter of applicants did not correctly file the application. Regardless of the loan forgiveness options, an income-driven repayment plan could lower the monthly repayment amount.

Finally, borrowers may also want to try to negotiate directly with the loan servicer. This may not always prove successful, but lenders can voluntarily accept reduced monthly payments, lower interest rates, or lower lump sum payments up front instead of having borrowers repay the full balance of the loan over time. So it’s worth a shot to call your loan servicer if you are having trouble making payments.