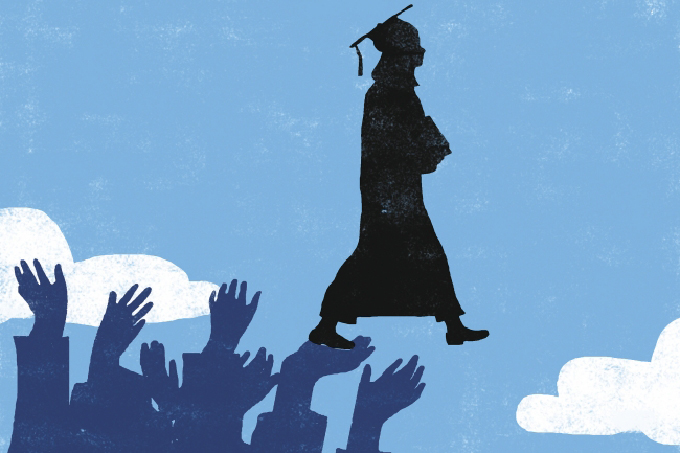 Practically since birth, our children have been indoctrinated into believing they must go to college after high school. Hey, there really was a time when going to college was both a privilege and a valid path into a better life.

But it’s not a privilege any more. Every state has multiple “open admissions” schools eager to snap up vulnerable kids as they walk out of high school. Getting accepted to college today is about as much an accomplishment as buying a refrigerator.

It’s also not necessarily a valid path into a better life. We have pimps helping their prostitutes pay their college loans now. I don’t want to sound judgmental, but if you become a prostitute because that’s the only way to pay your college loan bills, college is not giving you a better life. We also have people fleeing the country to escape their loans now…and they could have fled the country without going to college first. We have grandparents losing their social security due to college loans, too…if college doesn’t even pay off by the time you’re 65, there’s a problem here.

Bottom line, people are figuring out that college really isn’t such a good idea, or at least not for everyone. College enrollments have been dropping the last few years, and, most pleasingly, the drops have been greatest on the “lowest rung” of higher education, the scammy community and for-profit colleges. Again, not being judgmental, but college graduate IQ has dropped far in this decade, to the point that a degree means nothing in terms of intelligence (or training, or education), and this is in large part due to the bottom feeding aspects of our higher education system.

The leaders of higher education are in a panic over this drop; they’ve massively overbuilt the higher education system, inflating their own salaries and giving their cronies many fake jobs…things that cannot be paid for unless the student population on campus grows dramatically, instead of dropping like it is.

New Mexico has come up with a solution:

This is…insane. Already some 70% of high school graduates go to college, with 80% of US citizens going to college eventually. Isn’t this good enough? The gentle reader should understand that every student here that applies will be accepted, will be granted loan/grant money, and please understand the implication we have here: even a student with an IQ of 70 could find himself in college.

I’m not trying to be a jerk here but college really isn’t for everyone. Imagine a law which would require every student to apply to BasketBall Camp, expressing an interest in playing basketball 8 hours a day whether the student really cares to do so, or not. It’s just insane, both from a “government is way too involved in our lives” and a “literally everyone going to college removes the value of college” standpoint.

What prompted this madness?

So, enrollment is dropping. And? Gee whiz, I bet the number of people using rotary phones has fallen dramatically in the last 6 years too…there’s no proposal to force people to use those, is there? Of course not, there’s no student loan money for that.

The openly predatory nature of this law is astonishing. These guys really are shameless.

it also could encourage prospective first-generation college students to seriously consider getting into a higher education institution.

The most fraudulent community colleges really target those “first generation” students in much the same way crocodiles go after young herd animals: they’re easy prey. Just as a young deer has no idea what vicious creature is waiting in the water, so too does the first generation student not understand how many leaders in higher education drool at the thought of exploiting the new graduate’s ignorance. A first generation student has no family to tell him he’s being tricked, getting a fake education, or know how the rip-off of the usual college loan scam works.

It’s vile, and this law will only set up more kids for the slaughter. This level of ruthlessness is “best practices,” however:

The New Mexico bill is modeled after a similar requirement that Gentry said was put in place for high school students in San Marcos, Texas, more than a decade ago. And last year in Chicago, Mayor Rahm Emanuel made post-high school plans a graduation requirement…

Please understand how these rules are a monstrosity. The main reason enrollments are falling is the word has gotten out: the people cheated by the student loan scam are old enough to have kids going to college…and they’re being warned away. By forcing everyone to apply to college, it will catch the people from families which do not yet have victims of student loans in them. These rules will be forcing the young deer into the deepest part of the river…how do the lawmakers sleep at night, knowing as they must the evil of their laws?

Many of the state’s community colleges don’t charge application fees and applying online can take as little as 20 minutes.

Again, the predatory nature of this couldn’t be more clear. Already, anyone who has an interest in going to college can apply, for free, with little effort. There’s simply no ethical reason to force people do this.

“You’ve got to provide the support to make that happen,” Lumley said. “First-generation kids, for a lot of them, the reason they don’t go to college is they have no idea how to even start that process.”

These kids, despite the best efforts of the guidance counselors and the schools in general can’t seem to figure out “go online to fill out the free application.” And the solution is to make a law forcing them to do it?

The thinking here is just so muddled. New Mexico’s public education system is so terrible that 12 years of training isn’t enough for some graduates to fill out a form designed to be very simple to complete, or to show up on campus so a trained professional can fill out the form for the graduate.

And they think the problem here is there isn’t a law forcing the student to apply to college.

Bottom line, if there were no student loan/grant system creating so many victims, I’d find this just another stupid law from a government always seeking new ways to intrude into our lives. But throw in those loans, and we’re looking at pure evil here.

Kill the student loan scam at the federal level, and I bet these sorts of laws wouldn’t even get discussed.