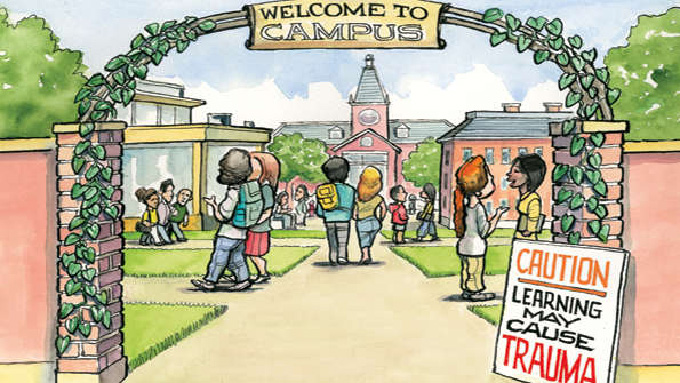 The notion that college student protesters are reacting to “offensive” speech has held outsized influence in national debates about free speech and student unrest on campus. The right’s preoccupation with the idea of the “offended” student—the “crybully,” the “snowflake,” the “little fascist”—is so integral to conservative political identity in the Trump era that it’s elevated an entire media industry, with sites like Campus Reform dedicating themselves almost entirely to the “offended college student” beat. Even in more politically neutral circles, it’s common to frame student grievances as matters of “being offended,” even while acknowledging, as University of Oregon president Michael H. Schill does, that “often, the concerns students express very much deserve to be addressed.”

Among the most memorable flashpoints for the “offended” student bugbear was the tense verbal conflict over “offensive” Halloween costumes at Yale, between Master Nicholas Christakis (of the Silliman residence) and a student who shouted “It is your job to create a place of comfort and home for the students that live in Silliman…do you understand that?” Though this student was clearly angry and frustrated, she articulated a perfectly reasonable concern, a concern far more profound and consequential than whether she was personally “offended” by those who support the right to wear “offensive” Halloween costumes. The role of residential faculty like Christakis is a tricky one (I know, because I’m a faculty resident), and whether we agree with the student, she has at the very least raised reasonable and important question about what residential staff should and shouldn’t do to create not a “safe space,” but a living space for all students.

Nevertheless, even left-leaning media covered the Yale incident with an emphasis on “disrespectful” college students demanding “safe spaces” and being “offended” by words and costumes.  Indeed, taking offense (over Halloween costumes) was central to what happened at Yale, and in so many other campus incidents. But too often we’re uninterested in investigating and discussing the conditions underlying our “offended” students. Too often, the salaciousness of “offended” student stories takes precedence over more interesting and more pressing issues, like whether colleges and universities who rightly aim for diverse student bodies are also fostering communities in which every student is safe enough to thrive.

We have to recognize that the language of “taking offense” or “being offended” was always part of a rhetorical ploy to minimize graver concerns than how students feel. In other words, focusing on the idea that “students were offended” is a way of reducing rational, well-founded grievances to matters of mere emotional reaction. Phrases like “I’m sorry you were offended” elide the persons, actions, or conditions that generate student grievances, placing the burden of justification on the aggrieved. The logic of this rhetorical move is that if students “were offended,” it’s because they allowed offense to happen, thus they did it to themselves.

In reality, when students speak for themselves—as opposed to when media outlets disingenuously frame their concerns as matters of “offense”—they don’t usually speak of being offended. They may describe something as “offensive” en route to explaining why (or what the real problem is). And when they do frame grievances in this manner, it’s typically while searching for further language to express a grievance that goes well beyond how they feel. If we actually listen to the students present at and behind some of the highest-profile campus controversies over the past few years, we find them articulating concerns that go well beyond being “offended.”

Jonathan Butler, the University of Missouri student who went on a hunger strike after a swastika appeared on the wall in a campus bathroom, said “I already feel like campus is an unlivable space…I’m already not wanted here. I’m already not treated like I’m human.” Butler isn’t talking about being “offended” or needing a “safe space”; he’s talking about whether he’s treated with basic human dignity on his campus.

A group at Middlebury College, White Students for Racial Justice, objected to the Charles Murray event last March that infamously turned violent not by claiming Murray was “offensive,” but that Murray’s research “uses largely anecdotal evidence to blame poor people in America for being poor, attempting to explain economic inequality through a perceived gap in virtue.” Regardless of whether you think such critiques of the quality of Murray’s research justify the desire to prevent him from speaking on campus, it’s clear that Middlebury students’ concerns about Murray were about more than how he makes them feel.

More recently, in response to Ben Shapiro speaking on campus, Berkeley student Samantha Shadrow writes: “Few of my fellow students…seemed perturbed by Shapiro’s visit. We were more put out by the administration’s decision to preemptively close six buildings and hire what seemed like a platoon of militarized police officers.” Clearly, Shadrow’s grievance isn’t that she and fellow Berkeley students are offended by Shapiro or Milo Yiannopoulos, but that her university chose to surrender itself to high-profile disruptions.

My point here is not that any of these student responses—whether to university administrators or to allegedly “offensive” campus speaking events—are necessarily grounds for disinviting speakers, or for ousting people in administrative positions.  My point is that these student responses are all substantive and germane. They are all, unto themselves, starting points for further dialogue and debate that we should take seriously. When we reduce such incidents to mere matters of students “taking offense,” we effectively silence the substantive speech of these students. In this way the very rhetorical framing of the “offended student,” ostensibly in the name of “free speech” concerns, is itself a silencing tactic.

Author Bio: Aaron Hanlon is Assistant Professor of English at Colby College.  He writes regularly on issues related to free speech on campus