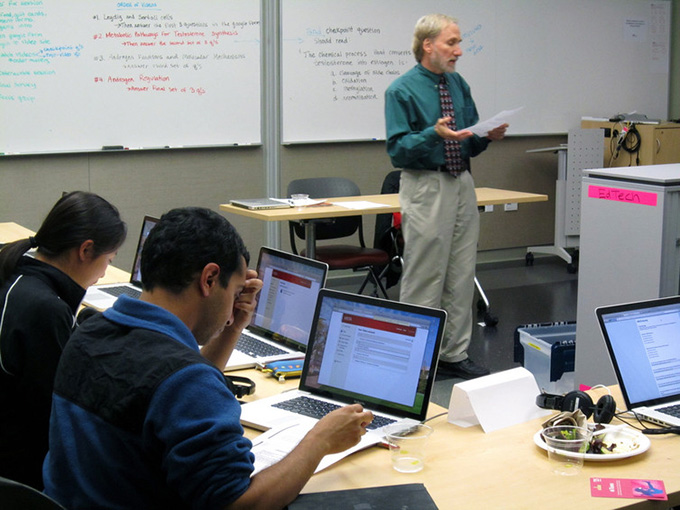 Last time around I talked about a professor who decided to just fail the whole class, based on the actions of a (probable large) majority.

While the professor overreacted here, I feel the need to give and clarify his explanation:

“…the class was his worst in 20 years of college-level teaching. The professor…is new to Galveston, relocated… He stressed that the students’ failings were academic as well as behavioral. Most, he said, couldn’t do a “break-even analysis” in which students were asked to consider a product and its production costs per unit, and determine the production levels needed to reach a profit.

I want to point out that I’ve seen the like before: the professor just went from a legit school to a, well, less legit school, and was caught off guard by the “shift” that’s happened to much of higher education in the last few decades.

People just don’t realize that “University A” and “University B” can be 5 miles apart, have the same accreditation, and charge the same price, and look the same on paper. Inside the classroom, however, University A covers legitimate work, while University B is completely unhinged, with ridiculous things like student-organized fistfights taking place behind what should be the physics lab building, regular drug deals going on in the bathrooms, and empty parking lots even though, supposedly, the classes are being held.

Similarly, I’ve seen many professors, upon coming to an unhinged campus, shocked at the utter lack of knowledge in students that, presumably, had already taken and passed previous courses.

“In most of his career, he said, he has rarely awarded grades of F except for academic dishonesty. He said he has never failed an entire class before, but felt he had no choice after trying to control the class and complaining to administrators at the university.”

So, while he’s being a bit unreasonable, he’s actually a typical professor. It’s hard to fail students (it’s why an A grade is basically “average”). He tried to get admin to do something about this mess, and they shut him down. So, he’s quitting and letting the students be admin’s problem.

One detail overlooked in the article needs reinforcing:

“Students have complained that they need this class to graduate, and Horwitz said that based on the academic and behavioral issues in class, they do not deserve to graduate with degrees in business fields (the majors for which the course is designed and required).”

The overlooked detail? These weren’t freshmen, socially promoted through public school and then let in through foolish open-admission policies. These were seniors. These disrespectful, belligerent, openly cheating students had made it through 4 years at this school, and were close to graduating, without learning even the most basic business skill (“how much do you need to sell to break even?”). They just needed this last class to graduate as “educated” people.

Again, I hope employers aren’t paying attention to what the professor discovered here, but this is a devastating revelation for the school: you can literally go 4 years through the business program, and learn nothing about business or about how to act like an adult.

Anyone seriously think a degree from this place will be worth an extra million bucks over a lifetime? The students are being charged as though it were, so it’s a fair question to ask.

To survive in higher education, a professor generally has to keep his head down, lest admin hack it off.

“…he has received (and he shared) emails that were quite critical and mocked him, and others that praised him for taking a stand…”

I wish this hadn’t been said in the article. I know full well admin is now going through the professor’s e-mail account, finding who DARED to say maybe there should be a little more discipline and knowledge in class, and writing up some termination letters. Other administrators have raided a disliked professor’s e-mails before.

Is the professor unfair in failing everyone? Sure, but admin didn’t leave him much choice:

“…said that “a few” students had not engaged in misbehavior, and he said that those students were also the best academic performers. Horwitz said he offered to the university that he would continue to teach just those students, but was told that wasn’t possible,…”

It doesn’t matter how problematic a student is, admin won’t get rid of the student so that the legitimate students can learn. Hmm, is this really a good idea? Only if you don’t care about education…and we’re talking about administrators here, so in their eyes it’s a great idea to let disruptive people remain in the classroom.

So while the professor is indeed being forced by administration into being unfair, there are two bigger issues here to not allow an overrule of his grades, especially by administration. Let’s go over these:

1) Every graduate of this institution just had the value of his diploma reduced. A very clear message is being sent by administration that students that know nothing and can’t even behave in a remotely civil manner will still graduate no matter what.

2) If administration establishes that it can hand out whatever grades it wants to whoever it wants, faculty will become even more irrelevant in higher education. Considering what’s happened in higher education so far, making administrative power even more absolute is a terrible idea. Why not just have admin sell the degrees directly, after all? Granted, quite a few administrators have been doing just that, but I see no reason to encourage the practice.

On the other hand, suppose administration lets this unfairness happen. What would the result be? Well, a handful of students would get cheated out of passing the course, but they’re already being cheated by admin as it is by having their degrees so horribly debased. Again, admin is easily as much as fault as the professor by forcing this unfairness. If admin, instead of selling out the integrity of the institution in exchange for growth, had allowed standards and discipline in the classroom in prior years, there wouldn’t be a room full of college seniors that are incapable of doing anything students at a legitimate school can do.

So, a little pain in the short term, as a handful of students have to take the course over. In the long run? The campus would probably become a more legitimate institution. Students would get the message that if, as a class, they go too far with the cheating and misbehaving (and honestly, at the senior level, “too far” isn’t much at all), they could all get failed. It’s funny that business is supposed be all about mutual exchange and cooperation, but this concept is, apparently, anathema in this case.

I know, I know, there is still an immediate unfairness to a few students here. But sooner or later, the kind of fraud going on in many of our institutions of higher education will be revealed. The Federal government is already shutting down large, fraudulent schools, and that ultimately harms far more students than anything that goes on in a single classroom.

Why can’t administration take even a tiny, single classroom-sized, stand for integrity? Just kick a few students out, and the rest will get a message. Oh yeah, that would cut into growth, the only measure of success for administrators.