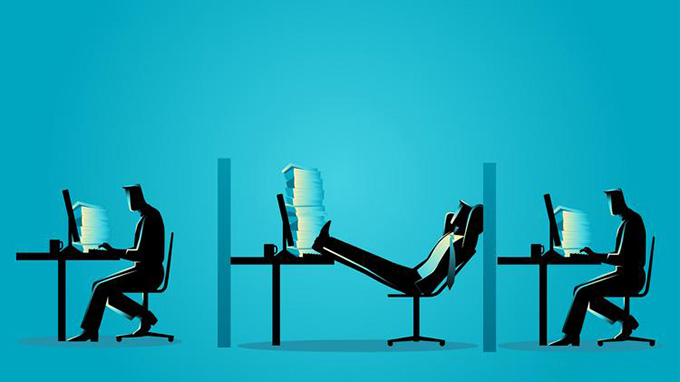 Last September, the Gallup polling institute suggested that 50% of full-time or part-time employees over the age of 18 in the United States would be “quiet quits”, which would designate people who ” don’t outdo themselves at work and just live up to their job description.

Immediately, the term “quiet quitting” imposed itself in the public debate and many French media exposed this trend.

Admittedly, it remains too early to measure more precisely and with a reliable methodology the realities behind this word. The evolution of working time, at least for executives, would, for example, provide a better indicator. However, the appearance of this “buzzword” remains interesting because it signals a form of concern on the part of employers regarding the consent of their employees to engage in their work as much as they would like, in the extension of the “big quit”, (“the big resignation  “), which had reached its peak 4.3 million departures in American companies for the month of August 2021 alone.

This concern with regard to employees who would limit themselves to the minimum is also very old. More than a century ago, the work of Frederick Taylor, father of the scientific organization of work, was already aimed at flushing out and suppressing the “systematic loitering” of workers.

As such, quiet quitting can evoke many notions in the sociology of work and organizations such as:

In the book Working in the 21st Century (Éditions Laffont, 2015), we have shown that it is a question of doing the minimum expected of the position, to protect oneself from deep disappointment with regard to a job to which one was initially very attached.

Thus, Nadine, a nurse at the hospital, deplores the excessive cut that has been made between them and the doctors, relegating them to the rank of “technicians”. “We don’t know if the child has an infection or if they put a treatment, why… we put the medicine and that’s it,” she laments. For her, apathy has become a defense mechanism since she feels she can no longer “take initiatives” and “think about what she is doing”. However, forcing oneself into an apathetic functioning is not always enough to make suffering at work bearable.

For Florence, a manager in a mutual insurance company, who has experienced numerous mergers and rationalizations of an activity that she no longer supports, apathy is accompanied by taking medication:

“We take drugs. I took antidepressants for a while and I’m not the only one. […] Because I no longer want to work. I don’t like the job, I do it because you have to make a good living. […] For example, updating point accounts for agents, I can’t stand it anymore! I would be able to accept any job not to do that! “.

The resignation rate, i.e. the number of employees who resign compared to the total number of employees, was 2.7% in the first quarter of 2022 . This rate is high but not unprecedented if we go back to the financial crisis of 2008. This is an indicator that usually falls during crises and rises with recoveries. For the vast majority of employees, resignation is therefore not an option to cope with a job that would no longer have meaning or whose working conditions would be too harsh. The employment rate also reached a historically high level in the first quarter of 2021 according to INSEE , with 73% of individuals in employment among 15-64 year olds.

However, according to the Direction of the animation of research, studies and statistics (Dares), the attachment to the meaning of work progressed at the height of health constraints. In January 2021, almost 20% of working people said they felt a greater sense of purpose or pride in their work, while 10% of them indicated on the contrary a deterioration in the meaning of work. The health crisis and its confinements have thus been able to allow workers to take a step back from the conditions and meaning of work.

Note that the meaning of work is an old concern. Indeed, the major international surveys that have been conducted since the 1980s show more broadly that the French attach great importance to work as an activity that provides income and dignity . In 2015, a survey by the Center for Studies and Research on Qualifications (Cereq) also showed that 33% of employees wanted to change jobs , for reasons that always combine meaning and working conditions.

In reality, for all socio-professional categories, the question very often arises in terms of health, whether physical or mental. Indeed, employees suffer when their work seems to them absurd , of poor quality, unrecognized, but also when it is carried out in unsustainable conditions.

Thus, the “silent resignation” is probably not the cold and deliberate choice of maximizing individuals but would rather be the spontaneous establishment of a defense mechanism when the work is no longer tenable. Defense mechanism to mitigate the feeling of absurdity, the lack of recognition whether it comes from colleagues, superiors or whether it is salary, that is, in terms of value sharing.

This is how we can understand the strike, at the origin of the fuel shortages currently affecting France by Total employees, who do not understand why the record profits of their company would not concern them.

“Why are workers working so hard”

As Marx reminds us, in the Grundrisse or Foundations of the Critique of Political Economy , in a world where workers are “free” to sell their labor power, the question of cooperation imposes itself as the foundation of the system of production. capitalist. It could therefore be that notions such as quiet quitting or big quitting are essential today because they reflect a concern about the maintenance of modes of cooperation (availability, intensity, subjective and emotional investment, etc.) and therefore the willingness of the labor force to collaborate in the current labor regime.

Should we share this concern? On the contrary, if the “silent resignation” consists, for workers, in questioning who is contractually expected of them, in assessing the gap between what they do and what they are paid, and then give up doing all or part of this free work, then the sum of these individual behaviors could have political significance by calling into question the functioning of the productive system.

In the three State public services, the proper accomplishment of public service missions relies to a significant extent on this excess work: whether one thinks, for example, of unpaid overtime in the care, education, the police or justice! And in the private sector, the creation of added value is based in particular on the overwork of employees, without them seeing the benefits. However, as we show in a comparative study between France and Finland, professional availability limited to the expectations of the contract is perfectly compatible with high productivity requirements.

Quiet quitting could thus constitute an invitation to stop deploring the lack of commitment of workers, and instead to ask oneself, with the British sociologist Michael Burawoy in his book Producing Consent , “why do they work so much”  ? This would then be an opportunity to better recognize that the proper functioning of organizations depends on what workers do in addition to what is contractually expected of them, and those in all trades and socio-professional categories, from workers to executives .

Author Bio: Maelezig Bigi is a Researcher affiliated with the Center for Employment and Labor Studies, Co-director of the Study Group on Work and Occupational Health (GIS Gestes), Lecturer in Sociology at the National Conservatory of Arts and Crafts (CNAM )