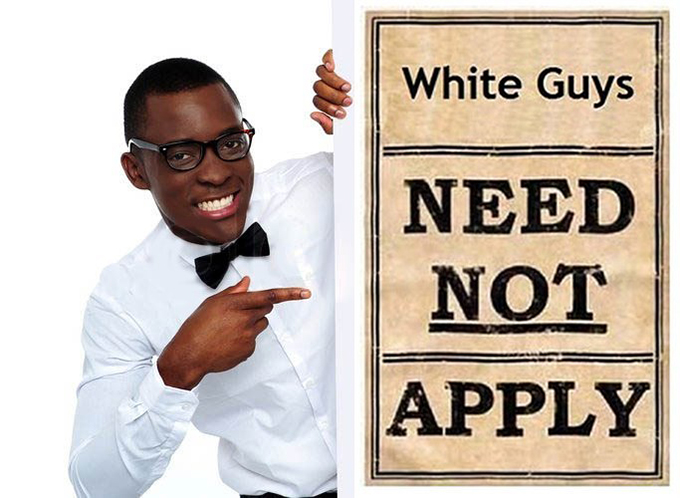 One of the many, many, problems with having our campuses taken over by Progressives is their racism. The only real advantage to the takeover is this racism, long hidden via “wink and a nod” policies which were never in writing (but enforced through hiring and firing)…are now ever more commonly in black and white.

This is rather important, because in the past, whenever someone complained about those “wink and a nod” policies, they’d only be branded a dirty conspiracy theorist and fired…and none grieve the removal of dirty conspiracy theorists. But now that it’s all out in the open, no such branding can take place (although firings are still possible). A few years ago, a Kentucky university made it clear they wanted a physicist, just not a white one…and they put that request in writing. Granted, once their racism became public, they backpedaled, but the fact remains: they really didn’t want more white professors on their campus.

Things have escalated and now racist postings by our universities no longer get taken down:

A symposium is a conference to discuss a particular subject, in this case science and technology. It’s a great opportunity for scholars, particularly new scholars, to introduce themselves, to show off their research and skills:

Now, “ABD” stands for “all but dissertation,” in other words a scholar who hadn’t yet received a doctorate in a specific field as yet, but will likely receive one soon, and be in search of a job shortly thereafter. Now, such conferences can be quite narrow, so the restriction of scholars “from…” isn’t that unusual, since it might specify a particular aspect of science and technology which is relevant for this conference. So, what’s the “from…” here?

Uh, what? Neither science nor technology cares one bit about history, that’s not what those fields are about. I remind the gentle reader that these claims of “underrepresented” ring quite hollow, since there’s never been a serious look at what level of representation is proper, or how things might be improved if we ever achieve those proper numbers. This is rather important, because wanting to know if there will ever be an end to this cry of “underrepresentation!” would be nice…there are a few departments/fiefdoms on campus where it’s very clear certain groups are overrepresented if we’re looking at demographic numbers, and still the cry is MOAR.

The advertisement helpfully defines what the underrepresented groups are:

Now, I’ve nothing against any of the above, but why is Williams College (where the conference is being held) granting this opportunity to start/advance a career to only certain groups? Is not Williams College inclusive? It’s a private school, so doesn’t need to be, but I would like to know their position.

They helpfully include their equal opportunity statement in the posting:

Beyond meeting fully its legal obligations for non-discrimination, Williams College is committed to building a diverse and inclusive community where members from all backgrounds can live, learn, and thrive.

I don’t know for sure, but choking off job advancement opportunities to a certain ethnic group strikes me as hurting that group’s chance to “thrive,” as they say above, and silencing such voices also strikes me as against diversity and inclusion. Granted the hypocrisy of Progressives is as ingrained as their racism…but it’s good see it documented in writing like this.

Now, in the Kentucky physicist incident I mentioned above, when called out on their racism, the admins lied when they backpedaled, saying they didn’t mean what they clearly meant in their written statement.

This time around, that option is not available:

The application deadline for this position has passed.

The announcement was up over a month, all applications have already been accepted/rejected. There’s no way the school can deny that the school hasn’t made all their invitations to the speakers (and printed the $500 checks for speaking) based explicitly on race. Even if they make such a denial, anyone who wishes can verify the denial is a lie by simple inspection of the speakers. I’m sure the mainstream media will send reporters out there on November 3rd (the date of the conference) to do so, since we all know how much the mainstream media cares so deeply about racism.

I wish the new scholars well on their career, even as I also wish their success at the conference weren’t tainted by the racism of those running it.