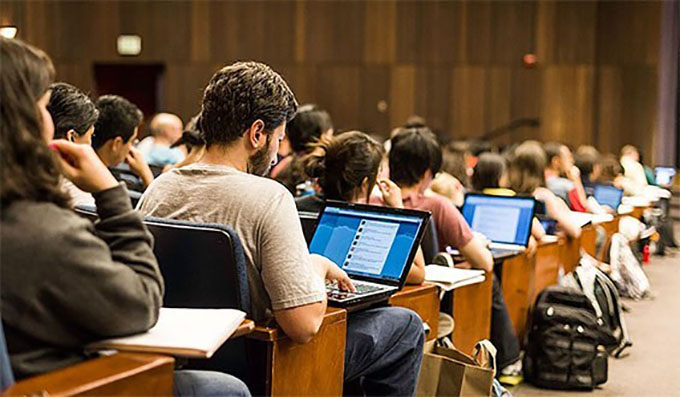 When I started my undergraduate education 21 years ago, computers were a luxury and talking to the professor meant coming to office hours — emails were not a thing. A student’s room would be filled with course syllabi, lecture notes and marked papers.

Today, I look at the university classroom from the other side. Students come to classes with laptops, phones and other electronic devices. They submit work electronically and have online access to course syllabi and PowerPoint slides. Occasionally, I show Ted Talk videos to students or do online polling in class. Technology has become an integral part of my classroom.

Most students use technology for class-related purposes and some students need it to accommodate their disabilities.

But off-task technology is also an issue. Multitasking — using technology for unrelated to class purposes while being in class — has a negative impact on students who use technology as well as for those sitting near them. The issue of what professors sometimes describe as a distraction has become enough of a problem that researchers are studying how to interpret and manage this. Some individual professors have gone as far to as try to ban laptops, but banning laptops in the classroom violates Human Rights legislation as some students require technology to accommodate their disabilities. Making exceptions for those students while banning technology for everyone else would violate their right to privacy.

As a university instructor with nine years of experience teaching undergraduate and graduate students, I noticed a growing uncertainty among my fellow instructors about how to deal with off-task technology in the classroom. My colleague from the Centre for Teaching Excellence of the University of Waterloo and I decided to study students’ and instructors’ perspectives on technology use in class. We found that students and professors have quite different perspectives about off-task technology.

We invited all students and instructors in the Faculty of Applied Health Sciences of the University of Waterloo to participate in an online survey that examined students’ use of technology in class for purposes related and unrelated to class, for example taking lecture notes versus texting friends.

We asked students whether they think technology use has a negative impact on them and the students around them. We also asked if instructors should do something to minimize the off-task technology use in class.

Most students who completed the survey believed that technology in class was inevitable and not really a problem. About 65 per cent of students said they use technology for class-related purposes and only 20 per cent said they use it for activities unrelated to class.

Students were more likely to use the technology for both class-related and unrelated activities in large, compared to small, classes. We thought this finding relates to the impersonal nature of the big lecture hall which creates feelings of anonymity and where students are less likely to be in close physical proximity to professors.

For the most part, students did not see a problem with using the technology in class for off-task purposes as long as it did not distract other students.

Overall, they saw the technology in the classroom not as a cause, but a means for distraction.

They told us they would switch to “off-task mode” when the material was too boring or dense, or when they had other important things to attend to, such as scheduling a job interview or finishing a paper for another class. Students saw technology use as a matter of personal autonomy, yet some felt that instructors are at fault because, in most cases, students turn to technology in class when they’re bored.

Blocked by a screen

While some instructors viewed technology as beneficial for learning, others saw it as harmful and distracting. Although 60 per cent of instructors believed that it is their role to minimize technology use in class, many felt it was an impossible, and perhaps ill-advised, task.

Some professors said they tried to educate students about the negative impact of technology-related distractions, whereas others simply tried to ignore it. And, resonating with my own experiences, some instructors spoke about longing for eye contact with students during lectures, which is now so often blocked by a computer screen.

Whose responsibility is it?

But about one-third of students and instructors remained undecided about the role instructors should play, probably because they were unsure how to mitigate the negative impact of technology use on other students.

Based on our findings, we developed a toolkit of strategies for dealing with technology-related distractions in class.

But we still have questions: Whose responsibility is it to manage technology-related distractions in class? What role can students play in developing expectations for class conduct and self-monitoring their own use of technology in class?

Most of instructors we talked to aspired to make their classes more engaging, but they felt that they cannot compete with the pull of social media.

Some professors also wondered if some topics are hard to deliver in an engaging format or if learning to stay awake despite being bored should be a part of university training.

Universities or instructors need to design rules of engagement for managing technology use in class so that it becomes a tool that helps to enhance learning, and not contribute to feeling alienated from each other.

One thing is certain — technology is here to stay.

Author Bios: Elena Neiterman is a Continuing Lecturer, School of Public Health and Health Systems, and Christine Zaza is Centre for Teaching Excellence Faculty Liaison for the Faculty of Applied Health Sciences (AHS), Arts (Psychology, Sociology, and Legal Studies) both at University of Waterloo