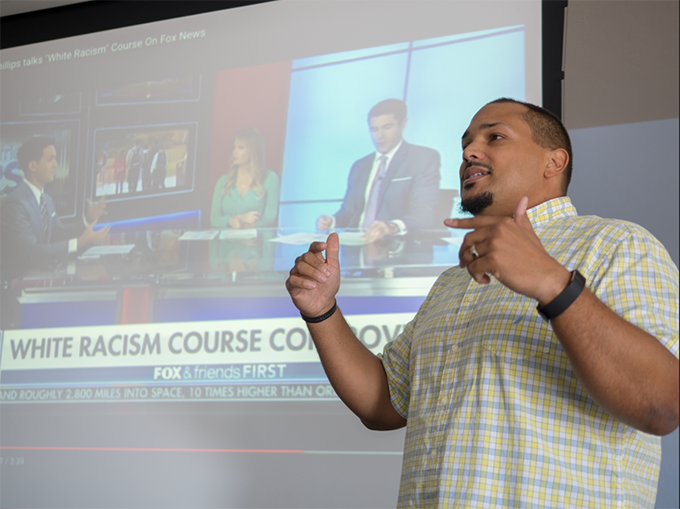 The need for students to learn about racism in American society existed long before I began teaching a course called “White Racism” at Florida Gulf Coast University earlier this year.

I chose to title my course “White Racism” because I thought it was scholarly and succinct, precise and powerful.

But others saw it differently. Many white Americans (and some people of color) became upset when they learned about this course.

Thousands took to social media and far right news sites and racist blogs to attack the course and me personally.

Some 150 of these individuals sent me hateful and threatening messages.

It might be tempting to blame the hostility to my course on the current political climate in which the president of the United States routinely makes overtly racist statements and receives some of his strongest support from members of white racist hate groups. But I cannot recall a time when scholarly critiques of white supremacy in the United States have not been met with scorn.

For instance, an identically titled course taught at the University of Connecticut also ignited controversy when it made its debut in the 1990s.

‘White racism’ is nothing new

Whether a course is titled “White Racism,”or “The Problem of Whiteness,” or any other appropriate term, in no way diminishes the academic legitimacy of the course. Scholars have used the term for decades.

I’ve taught courses on racial stratification in the U.S. for nearly a decademyself. The course, and others like it, are all anchored in a damning body of historical and contemporary scholarship. That scholarship shows that Europeans and their white descendants colonized what would become the United States as well as other places around the globe. They practiced all manner of inhumanity against non-whites. This has included genocide, slavery, murder, rape, torture, theft, chicanery, segregation, discrimination, intimidation, internment, humiliation and marginalization. This is inarguable.

Most Americans may have a general awareness of the trans-Atlantic slave trade, Jim Crow laws, lynchings, housing and labor market discrimination, and police brutality. Where we differ is about the gravity and scope of these white racist practices and the extent to which their effects continue to this day.

This disagreement is due in large part to many white Americans (and more than a few folks of color) subscribing to what Iand others refer to as the myth of a colorblind society.

This myth holds that the United States is a “post-racial” society where race is no longer related to individuals’ life chances. Some buy into this myth to the point where it prevents them from recognizing the everyday realities that show the United States is white supremacist in nature.

But the myth of a colorblind society crumbles underneath a substantial body of social science research that documents how race still matters in numerous areas of American life. For instance, the evidence shows that race still matters in the labor market and workplace, education, and even in access to clean water. Race matters in health care, the criminal justice system, and even everyday retail and dining experiences.

Still, many refuse to believe that racism persists. They point to the civil rights legislation of the 1960s or, more recently, the election of Barack Obama as the 44th president of the United States, as evidence of the “end of racism” or at least the “declining significance of race.”

Some might suggest that it would be easier to talk about white racism if it were done in less inflammatory or offensive ways. Perhaps this delicate approach — one that takes into account what author Robin DiAngelo refers to in her forthcoming book as “white fragility” — might be desirable or necessary for those who are fearful of the consequences of speaking unvarnished truth on racial matters. But when it comes to professors who deal with racial stratification, we should not be whitewashing reality.

Can there be ‘black racism’?

The most common complaint about my course that I’ve encountered thus far is that anybody can be racist. They ask indignantly: What about “black racism”? Or what about other forms of racism they believe exist on the part of Latinos, Asian Americans and Native peoples. My answer is: There is no such thing as black racism.

I am in no way the only one who holds this view. As Eduardo Bonilla-Silva, president of the American Sociological Association, said here at FGCU recently when asked if it would be fair to have classes such as “Asian Racism” or “Latino Racism”: “We can all be prejudiced, yeah? So, black people can be anti-white, but there is a big difference between having prejudiced views about other people and having a system that gives systemic privilege to some groups.”

Indeed, blacks did not develop and benefit from a centuries-old comprehensive system of racial oppression comprised of laws, policies, practices, traditions and an accompanying ideology — one that promotes the biological, intellectual and cultural superiority of whites to dominate other groups. Europeans and their white descendants, however, did. This is systemic racism. And students in courses such as mine are introduced to the scholarship that attests to this reality, past and present.

For instance, students will read and discuss pieces by and about W.E.B. Du Bois, Eduardo Bonilla-Silva, Joe Feagin, Kimberlé Crenshaw, Charles Mills, Paul Butler, Nikki Khanna, and Derrick Bell, among many others. They will also do work that will strengthen their ability to identify and confront colorblind racist statements.

Public money for a public problem

Some detractors of my course have suggested that students stand a better shot at getting a good grade in my course if their racial politics align with my own. This is nonsense. If a student finds peer-reviewed empirical evidence counter to that covered in the course, I would welcome the opportunity to review it.

Agreeing with my take on racial matters doesn’t impact a student’s grade. Whether a student earns an “A” in any of my courses is entirely dependent on the quality of the work they produce.

Another criticism I’ve heard is that I am teaching a course titled “White Racism” at a public university at taxpayer expense. Not only should my course and others like it be taught at public colleges and universities, they must be taught at such institutions.

“Reviewing the course content is much more instructive than passing judgment based on a two-word title,” he said in a statement. “At FGCU, as at all great universities, we teach our students critical thinking skills by challenging them to think independently and critically about important, even if controversial, issues of our times.”

Indeed, white supremacy and white racism remain terrible and intractable features of American society. It is in the public interest that students be provided with not only an opportunity to learn about the origin, logic and consequences of white racial domination but also how to challenge and dismantle it. The public university classroom is among the best places for this to occur.