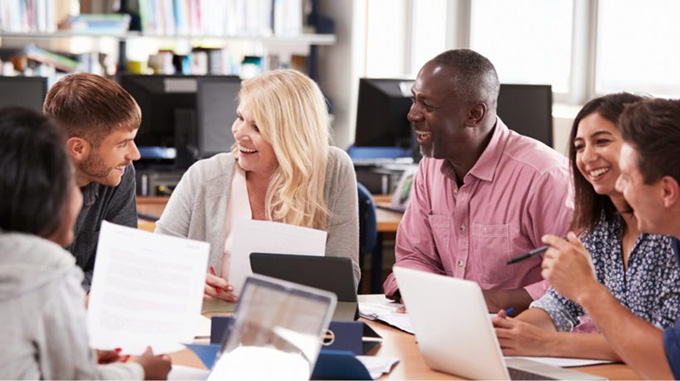 Many studies have been carried out on the ability of the human brain to learn languages. They try to establish age limits from which learning a language requires more effort and also offers unequal results.

Other studies address why learning languages ​​can serve to maintain intellectual activity in stages of vital maturity.

Finally, others deal with the convenience or not of being exposed to several languages ​​at an early age, with the advantages or disadvantages that the mixture of linguistic codes entails.

Learning is not the same as acquiring

Children who are exposed to more than one language from birth tend to acquire those languages ​​naturally. Contact in your family environment with competent people in different languages ​​is an important way. However, learning some of them can also be formally reinforced in the school context.

On the other hand, young people, adults and the elderly learn languages ​​other than their mother tongue consciously and with specific objectives. As a general rule, they do so within a specific school or training context, but they can also count on reinforcement in their family environment.

In both cases, the result is a bilingual, trilingual, or multilingual/polyglot speaker, as opposed to a single or monolingual speaker.

We observe that both processes, learning and acquiring a language, take place in a social environment where the child, youth, adult or elder interacts with other beings.

In this social environment, a distinction is made between:

Learning another language involves a conscious learning process: you learn a language that is used as a vehicle of communication between different peoples or nations.

In the strict sense, the child who learns to speak his mother tongue does not learn a language. The child acquires a language, except when exposed to a direct learning process. For example, let’s think of a child who acquires Spanish at home as her mother tongue and, in addition, learns Spanish at school as his nation’s language. In this case, language and language coincide. The acquisition and learning processes converge.

At other ages, the balance tilts the other way. Young, old and old learn a language. When they were children they acquired their mother tongue and now they can continue learning their mother tongue understood as a language in a training context (schools, university, adult education). But they can also learn a language as a second language. English would be a good example of a language that is common to various peoples or nations. The acquisition process is diluted in favor of the learning process.

For both groups, the language learned or the language acquired is usually a language that has developed subject to the historical evolution of the human being.

Language as a cultural product

At this point another determining factor comes into play: culture.

Language does not only have grammatical or lexical dimensions, but also cultural, social and personal dimensions .

If language is understood as a cultural product, learning it is a form of acculturation in which social and psychological factors are directly involved.

This acculturation model applied to the study of language learning since the late 1970s is not without its limitations.

However, it integrates a perspective attentive to the context that reinforces the disposition and motivation of the subjects who learn a language. In addition, it gives them cultural sensitivity, whatever their age.

In keeping with this open spirit, the European Union promotes multilingualism . He defines it as one of his eight key competencies for “personal fulfillment, a healthy and sustainable lifestyle, employability, active citizenship and social inclusion”.

In this sense, it relates the improvement of linguistic skills with a global approach to language learning . It takes advantage of the linguistic diversity of its Member States to promote language awareness in multilingual classrooms from an early age.

Common European framework of reference for languages: learning, teaching, evaluation. Supplementary Volume .
We deduce, therefore, that the greater the linguistic exposure, the multilingual competence will improve. The same occurs in the case of cultural exposure in relation to multicultural competence.

It is in this last sense that language learning is an activity that can not only be done at any age, but its advantages vary throughout life: at a younger age, greater possibilities of natural integration of language skills and cultural while acquiring a language; the older, the greater the chances of exposure to linguistic and cultural experiences that allow or strengthen learning a language.

Author Bio: Mercedes Enriquez-Aranda is Professor of Translation and Interpreting at the University of Malaga