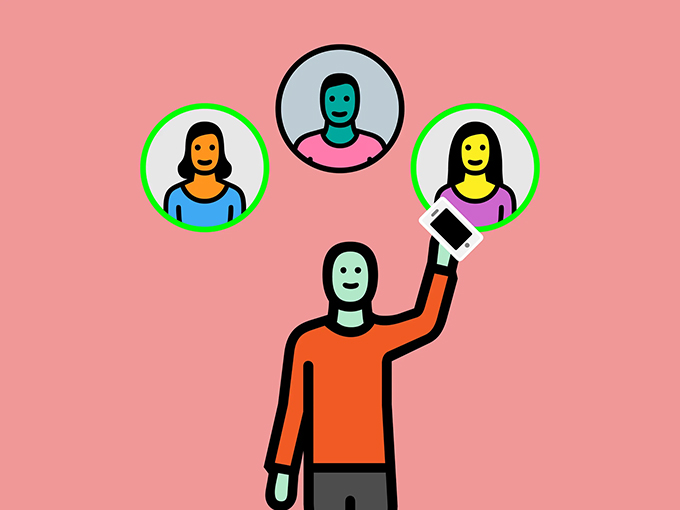 Adolescence corresponds to a period of profound changes, both biologically and socially, during which young people gradually detach themselves from their family to build a more personal world, separated from their parents, by integrating a new group of peers.

Friendship in adolescence is then made up of intimacy, sharing feelings, communion of ideas and no longer just shared activities as in childhood.

While relationships are often created in the school setting, digital social networks are giving rise to new forms of links, where the boundary between “real life” and virtuality is blurring. With the Internet, teenagers can talk about their friendships on blogs, stay in touch with their friends by instant messaging, therefore without spatial or temporal limits. Some will even say they are friends with people they have never met, others will use avatars to better show off or hide.

According to the Find your Tribe study published in 2020, while 13% of French people surveyed say they prefer having virtual friends rather than physical ones, the proportion rises to 20% for millennials. It’s as if the more “2.0 friends” we had, the more we felt we existed.

These links forged between two “profiles” lead to a new type of relationship, specific to the world of the web and social networks – friendling . This is very distinct from friendship as we know it, which, according to Antonio Casilli , sociologist, is based on a mental, moral but also physical exchange.

46% of teenagers generally find it easier to create friendships online rather than in the physical world, while the French are 35% to think so. These figures suggest that adolescents both need to control their identity and apprehend human relationships. The virtual could thus help them to overcome their fears but reduce their real involvement in the friendly relationship. Another study that I conducted with 400 French teenagers also highlighted gender differences. If teenage girls have a real penchant for real interactions, their male peers tend to favor the Internet.

Importance of the school setting

The questionnaires traditionally used in marketing do not make it possible to take into account the reality of friendships on a daily basis since they start from the way in which the teenager perceives himself in his peer group rather than considering his real and objective position: is it isolated or integrated?

To better identify the different bonds of friendship, an ethnographic method was therefore carried out with 145 teenagers, by participating in two class trips of one week each. The school trip breaks with a cut-out vision of the social times of adolescents and participant observation has proven to be the one in which the adolescent is most natural in his group of peers.

Most teenagers form the friendships that matter most to their schooling, which shows the importance of time spent together. The closest affinities are formed especially with people of their class, and of the same sex. Finally, the groups of friends that we identify seem structuring and stable since we find them during different situations (choice of tables for meals, shopping, allocation of seats on the bus, allocation of rooms and beds in dormitories , constitution of groups for visits, sports, etc.).

The social network analysis method has proven to be a relevant method for identifying the different friendship ties within a class. A sample of 1,000 adolescents , aged 12 to 18, divided into 30 classes, had to answer the following question: “Who are you most often in class with?” Name a maximum of five names.

Using the UCINET analysis software, the method made it possible to reconstitute the graphs representing the bonds of friendship of the adolescents within each of the classes. Each time a teenager had declared being often with another person in his class, this link was represented by an arrow going from the sender (the one who gives names) to the receiver (the one who receives them) to constitute the graph of a class.

The results showed differences according to gender: while the boys want to develop as many links as possible with the members of the network, the girls, for their part, seek more to develop close relationships with others.

Regardless of how relationships evolve with social networks, the figure of the “best friend” remains important in adolescence since it provides significant support in the process of emancipation from parents. The essential “best friend” is especially the affair of girls. We remember how much young Anne Franck suffered as a teenager from not having a friend to confide in. This is why, when, to escape Nazi persecution, Anne will find herself confined to her hiding place, she will immediately invent a girlfriend, Kitty, with whom she will converse in her famous Diary .

Most studies show that young girls confide in each other more than boys, who give preference to common activities and “jokes” (the “delirium” between friends). A study, carried out among more than 150 teenagers from different backgrounds and questioned annually over a period of 10 years (from their 15 to 25 years), showed that teenagers who favored close friendships showed little social anxiety and good self-confidence, as well as a low risk of depression. Friendship plays a central role in the development of an adolescent’s personality.

We know that boys have the particularity of walking around in gangs. The girls prefer, for their part, to meet in smaller groups, of 3 or 4 girlfriends, for whom the phenomena of training are less sensitive (which does not mean that the pressure of the small group is stronger, in other cases). If the girls continue to meet and go out rather in small groups, the youngest among them, like the boys, sometimes gather in tribes, like the goths. The gang, through the standards to which its members adhere, is also a vector of its own culture: specific centers of interest, common values, dress codes, a particular language.