It looks like a tattered surgical stocking with legs. But this millimetre-long fossil is one of the best preserved animal fossils from the Cambrian period, 500m years ago. With no mineralised hard parts, worms like this would normally rot and decay long before the processes of fossilisation could get to work. But this exceptional one-off preserves every wart and wrinkle of the animal’s skin, along with the fibrous tissues of its muscles. The great age of the fossil means that it provides a rare glimpse of one of the most significant evolutionary transitions – the origin of legs.

When a team of researchers led by my colleague, Zhang Xiguang, scrambled along a towpath carved into the severe banks of the Jinsha river, they could only imagine what fossil treasures lay in the grey carbonate nodules beneath their feet. On returning to the lab, these precious samples were dissolved in acetic acid (a strong vinegar), and the laborious process of picking fossils from the busy residues began. Somewhere in the array of shell fragments and trilobite spines, one fossil in particular stood out. 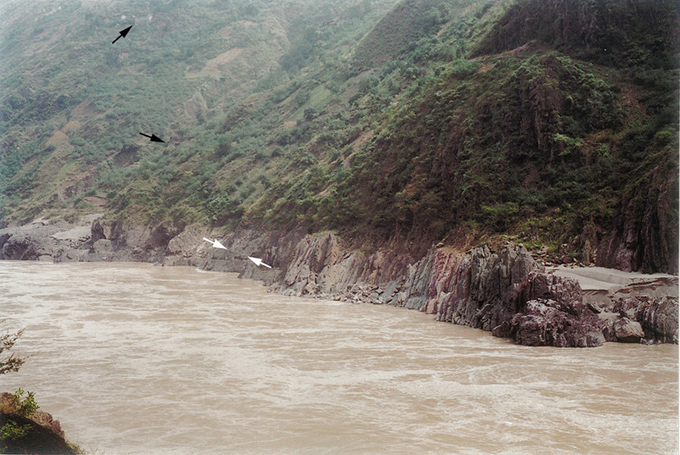 Prof Zhang invited me to study this tiny specimen, which consists of a pair of gangly legs, each tipped with the impression of three tiny claws. The legs are attached to a short and folded length of body, and I was immediately astonished by the fidelity of its wrinkly skin, which preserved every tiny wart and pimple.

The fossil is just a short length of an organism that grew to a centimetre or two in length. Ordinarily, complete animals would be of more interest to palaeontologists. But the broken nature of this fossil – which we have christened Tritonychus phanerosarkus – serves to reveal a spectacularly preserved interior.

When the animal died, bacteria growing on its surface seem to have rapidly deposited phosphate minerals that fossilised its skin, as well as the outer muscle layers that surrounded the animal’s innards. Such delicate preservation is almost unknown in the fossil record. While this is not quite the oldest occurrence of fossilised muscle tissue, it is the oldest specimen in which muscle fibres can be seen. 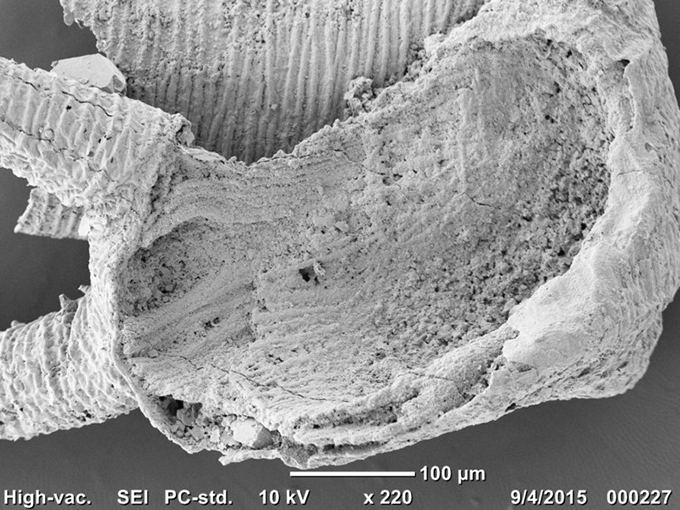 Close-up of the three layers of muscle tissue preserved at the rear end of the animal. Zhang Xiguang, Author provided

In our study on this animal, published in the journal Biology Letters, we use this fossil to tease apart the transition from the simple musculature of worms to the more complicated composition of legged animals.

Our fossil falls into a group of animals known as Ecdysozoa, which is a very wide group that includes modern-day insects and crustaceans. As such, there’s a lot of variety in how complex the movements of these animals are. The simplest worms within this group, the parasitic nematodes, only have one layer of muscles, which run from their head to their tail. By contracting muscles on one side of their body at a time, they can thrash about a little, but not in a particularly effective manner.

The second major group of ecdysozoan worms, the penis worms, have a second layer of muscle tissue made up of circular fibres that, when contracted, squeeze the worm so it becomes long and skinny. By alternately squeezing these ring muscles and their lengthways muscles, which contract to make the worm short and fat, priapulids can crawl and burrow, allowing much more intentional movement.

Velvet worms make up the third major ecdysozoan worm lineage – and these worms have legs. To co-ordinate the movement of their stubby appendages, velvet worms need a little more muscular finesse. This is provided in part by an additional layer of diagonal muscle tissue sandwiched between the two other layers.

The simplest interpretation here is that this additional layer of diagonal fibres evolved at the common boundary of the two muscle layers found in priapulids. It’s easy to imagine a series of small incremental steps that may have led to this differentiation.

Unfortunately, our fossil worm’s muscles do not fit this enticing model – they are “inside out”. Their particular configuration, with circular layers on the inside, is not observed in any living ecdysozoan. Instead of simply adding a layer at a time as geological time ticked by, gene mutation generated some radical experiments with the body architecture of early ecdysozoans. These novel body arrangements were only gradually pared back to the surviving body plans via the unforgiving process of natural selection.

This shows how important the fossil record is in unravelling the early threads of animal evolution. A cursory look at the animal kingdom today makes it look like the evolution of legs was almost inevitable. But it seems legs actually arose in a period of substantial evolutionary innovation among primordial worms, whose body architecture was much more versatile than today.

The radical reshuffle seen in our new fossil suggests that legs had a convoluted evolutionary journey. This probably required a substantial period of time, with lots of wacky-looking dead ends. Eventually, a lucky muscle arrangement allowed a fortunate early worm to make good use of the bumps or appendages that would eventually become legs.

Author Bio: Martin R. Smith is a Lecturer in Palaeontology at Durham University