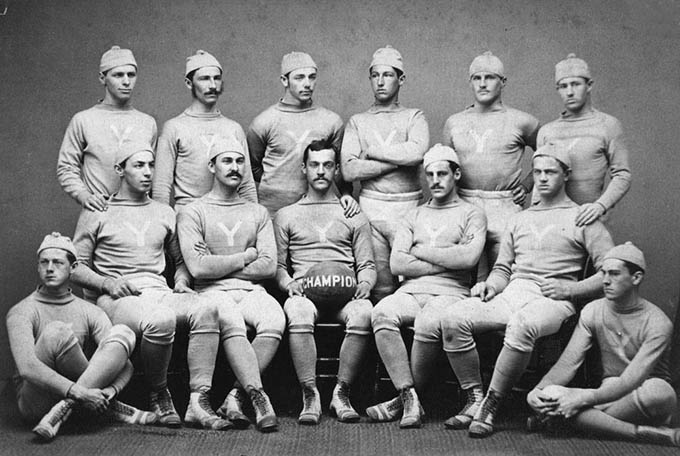 As long as it’s in the news, let’s pick on Yale some more.

One of the big problems on campus today is the lockdown to Progressive/Leftist/Cultural Marxist thinking…many departments, many fiefdoms, are filled exclusively with people who hold one particular set of beliefs and, more importantly, will not allow anyone who thinks differently to exist within those departments and fiefdoms.

As this set of beliefs gets ever more deranged, we see things happening which should never happen at a university, an institution devoted to the free exchange of ideas. A recent editorial at Yale shows the kind of garbage which is created when not even the very slightest of opposing views is allowed:

The title is certainly harmless enough, but it doesn’t take long to see pathology here:

Everyone knows a white boy with shiny brown hair and a saccharine smile that conceals his great ambitions. He could be in Grand Strategy or the Yale Political Union. Maybe he’s the editor-in-chief of the News. He takes his classes. He networks. And, when it comes time for graduation, he wins all the awards.

At first glance, the above is simple envy, but there’s so much here. Imagine instead if the author had said “black boy” and then described such in analogous terms…the outrage would have been incandescent in the media for weeks on end at the RACISM at Harvard. Taking classes and networking, incidentally, are options available to every college student, I’m not sure why “white boys” should be targeted for this activity. As far as “wins all the awards,” I beg to differ, and sure would like an example of this. When I won a national award in mathematics, I barely made the city paper—the local section, right after the kids who made Eagle Scout that month.

When I’m watching the white boy — who is now a white man by this point — on CNN, I’ll remember a racist remark that he said, an unintentional utterance that he made when he had one drink too many at a frat party during sophomore year. I’ll recall a message that he accidentally left open on a computer when he forgot to log out of iMessage, where he likened a woman’s body to a particularly large animal. I’ll kick myself for forgetting to screenshot the evidence.

Goodness, I’ve heard of people holding a grudge, but this author is demented, holding a grievance against someone who’s done nothing, and regretting not preserving “evidence” of alleged RACIST remarks made when drunk, of unintentional utterances.

These people need to be pitied, as I see no cure for the madness which has infected them. That said, the gentle reader needs to understand that this didn’t get posted randomly, the staff at the Yale student paper has had every opportunity to take this abomination down…and does not. Not a one of them is rational enough to see the sickness here.

The Kavanaugh trial was months ago, but still has an indelible effect on me.

Holy cow, still bitter about that witch hunt/trial? Imagine how isolated you need to be not have been told that “all those women” who came forward with their dubious testimony (note: testimony, not evidence) against Kavanaugh have not continued to push their claims, which they would do if they honestly believed the things they were saying. Moreover, several have recanted their claims, admitting that they flat out lied.

But these people are locked in their own world, so there’s nobody to tell them they’ve been lied to, repeatedly, about Kavanaugh. So they’re still angry that “that rapist” is actually on the Supreme Court.

Whisper networks, which are known as private chains of information which pass along knowledge of sexual assault, are useful, but insufficient in spreading information about indiscretions.

Whoa, trial by “whisper network”? It took humans millennia to develop a court system, a method by which evidence could be examined and a conclusion about someone’s guilt could be reached. Although wildly imperfect, surely it’s better than whispering campaigns?

Really, Yale, nobody there can think this through? Guess I’ll just start a whispering campaign about the regular human sacrifice going on at Yale then…

The hate-filled essay ends with her solution:

But I can’t do that anymore — I can’t let things slip by. I’m watching you, white boy. And this time, I’m taking the screenshot.

Yes, watch the “white boy,” take screenshots of his alleged transgressions so that, 30 years down the road, you can destroy him if he gets in the way of your political power. I guess the author will keep massive files on every “white boy,” much like Communist bloc countries did.

Lest the gentle reader think Yale is an aberration, allow me to also quote from a recent editorial from a Pennsylvania college paper:

Should White Boys Still Be Allowed to Talk?

I again point out the editorial is still up. I’m all for freedom of speech, but it’s queer how alternative media gets utterly de-platformed for daring to say Trump might win the presidential election, while this stuff stays up forever:

American society tells men, but especially white men, that their opinions have merit and that their voice is valuable, but after four years of listening to white boys in college, I am not so convinced. In my time at Dickinson I have listened to probably hundreds of white boys talk. It feels incessant. From classes and lectures, to the news and politics, there is an endless line of white boys waiting to share their opinions on the state of feminism in America, whether the LGBTQ+ population finally has enough rights, the merits of capitalism, etc. The list of what white boys think they are qualified to talk about is endless. Something very few of them seem to understand is that their (ill-informed, uncritical) opinions do not constitute truth. In fact, most often their opinions aren’t even original. White boys spout the narrative of dominant ideologies and pretend they’re hot takes instead of the same misleading garbage shoved down our throats by American institutions from birth.

I am so g****mned tired of listening to white boys.

Yeah, try substituting “black” for “white” in the above and see how easily you can get published in a college paper. Racist rants like the above are allowed because of the lockdown of Cultural Marxists in the papers (and elsewhere)…there are no sane people to stop this stuff being published.

So, should white boys still be allowed to share their “opinions”? Should we be forced to listen? In honor of Black History Month, I’m gonna go with a hell no. Go find someone whose perspective has been buried…

While I’m against racism in all its forms, and particularly pieces like the above, I do encourage the reader to heed the author’s final line: seek out the people who’ve been buried, listen to the likes of Alex Jones, David Seaman, Greg Hunter, and many others who have been silenced for daring to provide information opposing the mainstream narrative.