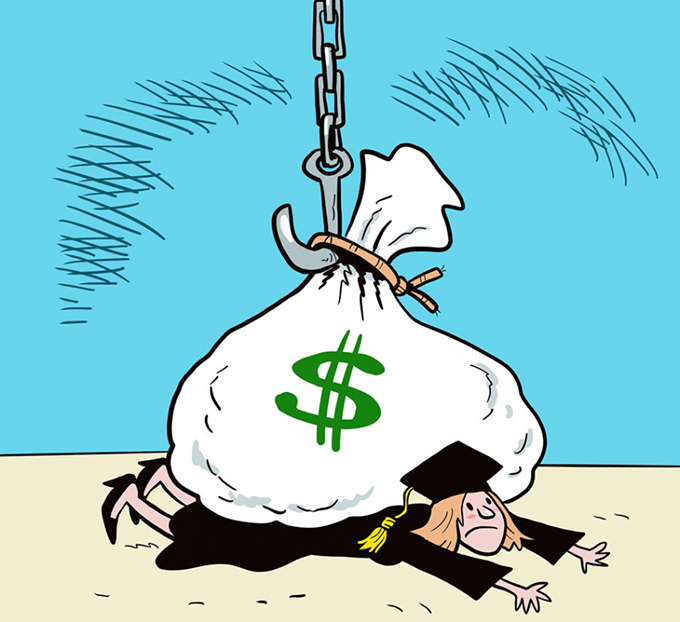 I’ve been hearing people seriously talk about cancelling student loan debt for at least a decade, probably more. Granted, almost everyone who’s for it has student debt, and most everyone against it doesn’t have student debt, so I appreciate conflict of interest here…but this is ad hominem, there are valid reasons both for and against it.

(Disclosure: I never had student debt; this is not a boast, as I went to college in an era where even graduate school tuition was under $1,000 a semester, where any kid with a $100 lawnmower or gardening tools could make $200 a week if he was willing to work hard…those days are long over. I am, of course, pro-cancellation, at the risk of getting ahead of myself.)

A recent article, a very long article, has many good pieces of information on it…but misses a really important, damning, argument against forcing people to pay their student loans. Let’s look at some highlights:

The above figures are fair enough, although both are miscounted by around 10%: quirks in the accounting rules allow for many loans to not actually count while the students are in school (this also allows for about a quarter of students to not even know they have loans…how this high a percentage doesn’t raise suspicions of fraud is beyond me).

In any event, the article is mostly pro-cancellation because the inevitability of it: most borrowers are fundamentally incapable of every paying it back. The article neglects to ask how that could be (again, one should suspect fraud here, see also the housing crash of 2008).

After much searching, I was able to find a few sensible voices in the wilderness…

Alas, he didn’t find me, which is saddening.

Taking a broader approach to this looming decision, the major themes of this essay are:

· Weak Arguments against Debt Cancellation from the ‘Right’

· Weak Arguments for Debt Cancellation and ‘Free’ College from the ‘Left’

I won’t waste time addressing the weak arguments one way or the other, but it’s high time I address the main, primary, argument for cancellation:

Most of higher education is fraudulently sold. From “You’ll earn a million more dollars if you earn any degree” to “You must learn all 23 gender names to do well in our Progressive Society,” too much of higher ed has been fraudulently misrepresented.

By definition, if a college graduate can’t earn enough from his degree to pay back the loan on his degree, he has a case for fraud. Trouble is, so many graduates fit that description that it’s not economically viable to go case-by-case, it’ll simply be cheaper to have a simple student debt jubilee, cancelling it all.

Of course this forgiveness should come with an important string attached: no more student loans, at least none provided by the Federal government. If private banks want to engage in such things, that’s their right…but the government should no leeway in enforcing such loans, which should again be clearable via bankruptcy (like most every other loan).

I should note the author doesn’t work in higher ed, and so is utterly unaware of the immense fraud (or of accreditations role in same). Similarly, he’s unaware of the breathtaking corruption of many community college systems, and so often pushes them as a “cheaper” alternative. I suppose they are, in much the same way as “vaping” is safer than smoking tobacco, and cheaper if you use bootleg cartridges! (In no way should this be taken as a recommendation for vaping, and regular readers of my blog know how extensively and thoroughly I’ve documented the fraud of community college.)

From a cursory overview, it would seem that the government and non-profit sectors have issued at least as much or possibly more false marketing to keep students trapped in debt than their much smaller for-profit college counterparts, who brought in only $16 billion of the $649 billion annual haul for U.S. colleges and universities. In other words, the too-pure-for-profit schools reap fully 97.5% of the total college and university income stream.

The above is perhaps the most useful side-tidbit on the whole massive piece. The government shrieks and points at “for profit” schools for stealing the student loan money, scrutinizing them to a high degree…but only 2.5% of higher ed’s revenue comes from those types of schools.

I assure the gentle reader that our state universities/community colleges get the lion’s share of the remaining 97.5% of revenue…and almost no scrutiny whatsoever about where that money is going.

To that extent, it was also odd to see so many “libertarian” critics of centralized banking line up with Wall Street for wanting to keep soaking students with interest payments on loans that banks largely pulled from thin air.

I really wish this guy had found me. I certainly lean Libertarian (acknowledging several critical failings, while appreciating it lacks the mass-murderous track record of prevailing political philosophies).

Anyway, I’m libertarian, and I would assure him that libertarian beliefs absolutely allow “fraud” as a legitimate reason not to honor a contract. And I reiterate: there are wide swaths of fraud in our higher education system, and not merely in the for-profit sector.

Total U.S. college revenue was a staggering $649 billion for the Fall 2016 to Spring 2017 school year, up 14.5% from two years prior. Over four-fifths of that income stream comes from government, institutional and private student loans and grants ($253 billion per PDF page 9), plus direct subsidies for state-run colleges and local community colleges (about $300 billion in FY 2018, ignoring the $11 billion overlap from state grants).

The gentle reader should keep the above in mind: our higher education system was raking in over 7% more each year in the years above—that’s the most recent data, but there’s little reason the trend line has reverse much in the last year or two. And yet with every slight downturn, the “leaders” of higher ed shriek how they’re running out of money.

This is a massive article, but I’ve hit the highlights above. Bottom line, however, what people need to know about student loan debt forgiveness is pretty simple:

We should do it because higher education fraudulently provided “education” in exchange for that loan money.

I’m sure there are exceptions, plenty of them, even, but in this case widespread forgiveness is just the most efficient way to do it. Shut down the Federal student loan scam as well, and it’s all good. Don’t do that shut down, and it’s all bad.