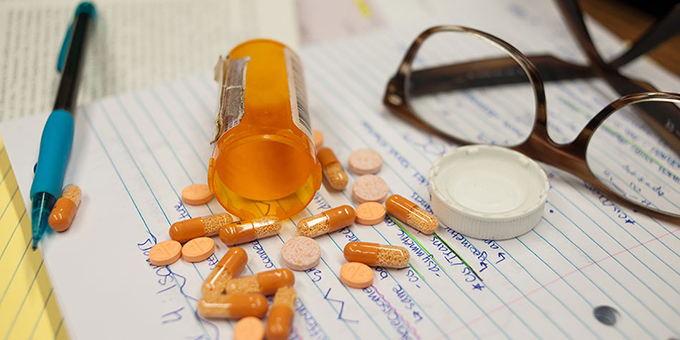 It’s that time of year again. The blossom is on the trees, and university libraries and reading rooms are heaving with students poring over laptops, textbooks and stacks of notes – exam season is here.

Though the quality of teaching is arguably as good as its ever been, and the support students get in terms of online material is brilliant, exams understandably make people anxious.

Of course, students have always felt pressure at exam time, but things seem to be different these days – thanks to increasing job competition, more graduates and higher levels of debt from tuition fees.

To cope with this exam stress, it seems increasing numbers of students are turning to so called “smart drugs”. Often referred to as “nootropics” – from the Greek, noos (mind) and tropos (growth) – these are chemicals intended to improve your mental powers.

It’s easy to see why students looking for an “edge” may turn to these substances to try and beat the competition. And it seems to be that, for a lot of them, it’s just part and parcel of gaining a degree: a recent Europe-wide survey found that most British university students generally approved of the use of such performance enhancing drugs for study.

Over in the US, as a result of student pressure, one university has actually amended its “honour code” to recognise this spike in performance enhancing substance use. The “honour code” is a set of rules or principles that govern the university community based on ideals that define what constitutes honourable behaviour. And Duke University’s amended code, makes it clear that use of prescription medication to enhance academic performance is not tolerated.

In the UK, there have also been calls for universities to be more aware of the problem. One survey found that more than 15% of Oxford University students took such drugs without a prescription – and similar levels are indicated nationwide. With a student population in excess of two million in the UK, this adds up to a lot of students potentially on smart drugs.

But students aren’t the only people taking nootropics. Office workers and city bankers are also reportedly using smart drugs to help boost productivity levels and allow them to work around the clock.

How do they work?

Some “smart drugs” make you more alert for longer. The first drugs for this were amphetamine (Adderall) and methamphetamine, which were used by both sides in World War II – for example by bomber pilots on long missions.

Essentially, amphetamines work by affecting the release and re-uptake of the neurotransmitters dopamine and norepinephrine. These help to regular your mood and behaviour and they can become addictive.

Methylphenidate a modified amphetamine which is more widely known as Ritalin is used to treat attention deficit hyperactivity disorder (ADHD) in children. But it is also taken by people wanting to enhance their performance. And it’s even been claimed that some students have “learned” the symptoms of ADHD to con doctors into prescribing it.

Ritalin increases dopamine levels, particularly affecting neurons in the prefrontal cortex – a part of the brain involved in attention and decision making as well as controlling your impulses.

But using it can have long-term consequences, including disrupted sleeping, increased risk-taking behaviour and weight loss. It can particularly affect young people, whose brains are still developing.

The drug of choice

One of the most popular “smart drugs” is Modafinil – which also goes under names like Provigil. Though it is not an amphetamine, it also increases dopamine levels and so has potential for abuse.

A 2013 study concluded that Modafinil can improve alertness and motivation when taken as a performance enhancer. But it was actually developed to treat narcoleptics and sufferers of “shift work sleep disorder” – symptoms of which include excessive sleepiness, alongside insomnia and sleep that feels unrefreshing or insufficient – so it was never intended to be taken in this way.

A European Medicines Agency investigation has also concluded that it should not be used by people with uncontrolled, moderate to severe hypertension, or by patients with cardiac arrhythmia. It was additionally shown that there were significant risks of skin and hypersensitivity reactions in children.

Of course, you could argue that we drink coffee for alertness, so what’s wrong with using smart drugs to give us that edge? And if some professionals, like soldiers and airmen, perform better when they receive a medication, why not other professionals, such as doctors – after all we have cosmetic surgery, so why not cosmetic neuroscience?

But the wider issue is that the long-term effects of taking these mind altering drugs in this non-prescribed way are still relatively unknown. The only thing we do know for certain is the addictive element of amphetamines – so the chances are that if you’re taking these types of drugs, you will want to, and need to, take more and more to get the same effects.

For people who buy these drugs online, there are also extra risks, because using an unknown supplier is very unsafe. Quality control is uncertain and you don’t know what you are actually getting or taking – or what the potentially adverse side effects will be. Overall then, the benefits of smart drugs don’t outweigh the risks – so it’s probably best to just stick to the coffee instead.

Author Bio: Simon Cotton is a Senior Lecturer in Chemistry at the University of Birmingham