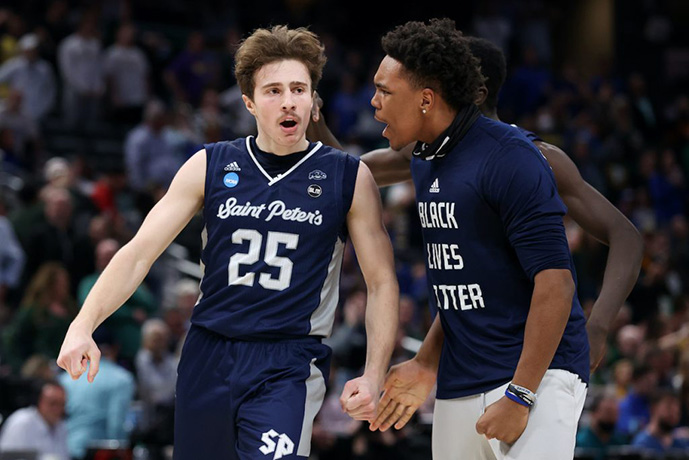 Few people outside Jersey City had heard of the No. 15 seed Saint Peter’s Peacocks before they upset No. 2 seed Kentucky in the first round of the NCAA Tournament.

Two days later, Saint Peter’s beat No. 7 seed Murray State to advance to the Sweet 16 and become the darlings of the men’s college basketball world. Duke coach Mike Krzyzewski even suggested that the national media attention could be worth tens of millions of dollars to the small New Jersey school.

In 2020, I published a study with economists Trevor Collier, Kurt Rotthoff and Alaina Baker that explored the value of unexpected NCAA basketball tournament runs.

Coach K’s forecast is a bit bullish. But we were able to show that earned media from a Cinderella run does boost enrollment, which has a tangible financial benefit.

Basketball fans tend to know one when they see it, but what exactly is a Cinderella team?

Notable examples include No. 10 seed Davidson, led by Stephen Curry, making the Elite Eight in 2008; No. 5 seed Butler’s run to the national championship game in 2010; and No. 15 seed Florida Gulf Coast dunking its way to the Sweet 16 in 2013.

We studied teams in the NCAA men’s basketball tournament from 1985 to 2017. During this period, there were 57 instances of Cinderella runs by 52 different schools.

We defined Cinderella schools as teams that won at least two games, excluding play-in games; did not enter as a No. 1 or No. 2 seed; and were dubbed a “Cinderella” or something similar by the media. Our results were consistent even when using slight variations of these criteria.

We found that private schools, such as Saint Peter’s, experience the largest gains, with an average increase in freshman enrollment of 4.4% two years after a Cinderella run. Furthermore, student quality – as measured by SAT scores – doesn’t decline with this added enrollment.

The national media coverage following unexpected tournament success generates large spikes in Google search trends by curious viewers, which, of course, include prospective students. The sudden attention and interest are basically a form of free advertising. 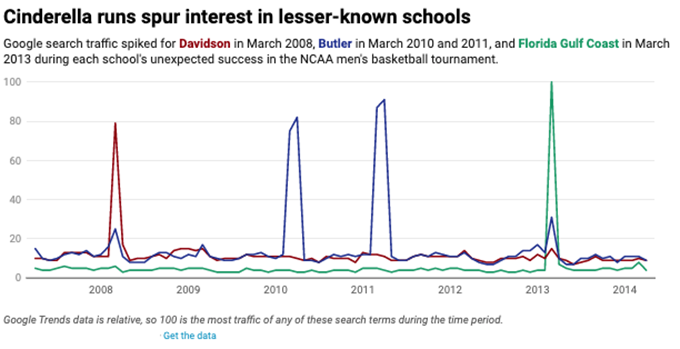 Using data from Peterson’s Undergraduate Database, we estimated that a 4.4% increase over the typical entering class at a private college is worth approximately US$9 million in additional revenue from tuition and room and board over the course of four years.

Saint Peter’s, however, has a much smaller entering class than that of a typical private school – its student body includes only 2,000 undergraduates. Kurt Rotthoff, one of the co-authors of our study, recently calculated that the team’s current run would amount to around $3.2 million over four years.

Other studies have also found an increase in applications following success in the NCAA men’s basketball tournament, primarily due to heightened media attention.

While there’s some debate over whether college athletics supports the academic mission of schools, Saint Peter’s is reveling in the moment. And aside from excitement for students, alumni and fans, the university can expect to see returns in the form of increased enrollment over the next couple of years, thanks to the attention being showered on their men’s basketball team.

Author Bio: Nancy Haskell is aAssistant Professor of Economics at the University of Dayton