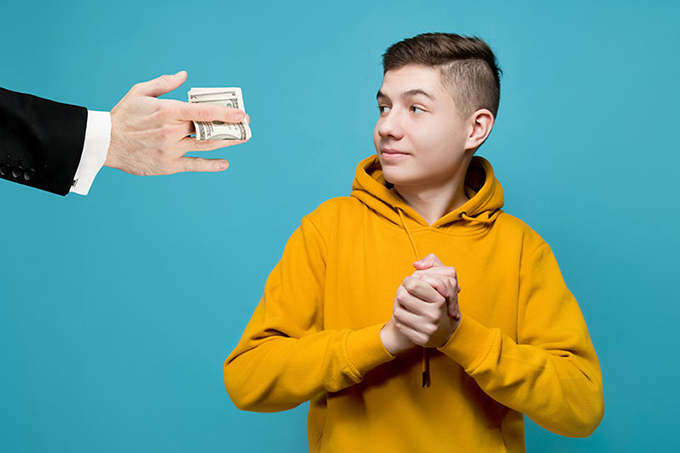 Many teenagers regularly receive small amounts of money from loved ones, which they spend most of the time in a friendly setting. This is what is commonly called “pocket money”. According to the Pixpay barometer , established with a sample of 1,000 parents of teenagers in college and high school, 92% of French teenagers would receive it, from the age of 11, upon entering college.

80% of parents decide to give pocket money to their offspring in order to teach them the value of money, introduce them to managing a budget and give them financial autonomy. From an early age, children can even have access to a bank account as well as a dedicated application, or even an associated credit card.

Although the payment card is acclaimed by parents for its practicality (55%) and its educational side (73%), only 26% of teenagers today have a card in their name. How can the pocket money of the 21st century  , dematerialized, contribute to the process of economic socialization of adolescents?
>center>
Since the Covid-19 health crisis, 32% of teenagers have reduced their visits to stores, while 27% of them have increased their online purchases . Having a bank account becomes interesting for teenagers in such a configuration. Including bank cards, current accounts and state-of-the-art mobile applications at low prices, the offers of neo-banks, freshly landed on the market – Freedom (formerly Kador, at Boursorama), Xaalys, Pixpay or even Kard – exclusively target young people with from 10 years old.

Some go so far as to develop a connected purse, such as Money Walkie, an electronic purse which is recharged via an application and which allows the child/adolescent to make small expenses at merchants.

At a time when cash would be condemned to disappear to give birth to a “cashless” society, the virtual wallet appears as a means of contributing to the process of economic socialization of adolescents, by experimenting with the management of a budget. , even stored virtually, and having deeper discussions with parents about financial education.

Money is not just a medium of exchange, it also has a significant symbolic role. So what does money mean to the adolescent?

A study , conducted among 510 French and American adolescents (233 boys and 277 girls, aged 12 to 18) and published in La Revue Française du Marketing , evaluated the representations of adolescents on this subject and showed the existence of four main symbolic meanings of money: status, worry, fulfillment and security.

The status factor is defined as the tendency to perceive money as a sign of prestige. Accomplishment also measures the tendency to consider money as a sign of success, but more through the prism of self-actualization. The security dimension represents the desire for protection that money inspires in the face of the uncertainty of the future. The worry dimension refers to the idea that money, more particularly the lack of money, can be a source of anxiety for the adolescent.

The results highlighted the positive influence of age only on worry about money. Thus, during the passage to high school, the teenager integrates that the money at his disposal no longer necessarily secures his future. He also begins to carry out remunerated activities (inside and outside the domestic sphere) and realizes that any salary must be earned. The origin of the money (donation vs. gain) thus plays a significant role in the perception of money as a means of accomplishment, of claiming a social status or a source of concern.

Earning money by oneself, through remunerated activities, is a way for adolescents to satisfy their consumption needs or desires, while allowing parents to fulfill their pedagogical duty: to teach the meaning of life. ‘effort. It also allows the adolescent to see money as a source of self-fulfilment, whereas the fact of depending on pocket money can feed the fear of lacking resources.

These perceptions of money (as a source of self-fulfilment, status, security or worry) allow us to better understand the different consumption strategies adopted by adolescents: the ability to seek advantageous prices, the brand preference, novelty seeking , ability to research information prior to purchase, peer group consultation prior to purchase.

In other words, teenagers, seeing money as a source of security, tend to spend according to a logic they consider rational, the first rule being not to spend beyond their means. In order to meet this requirement, the strategies are multiple: seek the best price or obtain information before the purchase.

On the contrary, adolescents, representing money as a source of self-fulfillment or social status, seek to satisfy their need for social differentiation (that is, the search for novelty) and social approval ( i.e. seeking social support before purchasing, importance given to brands).