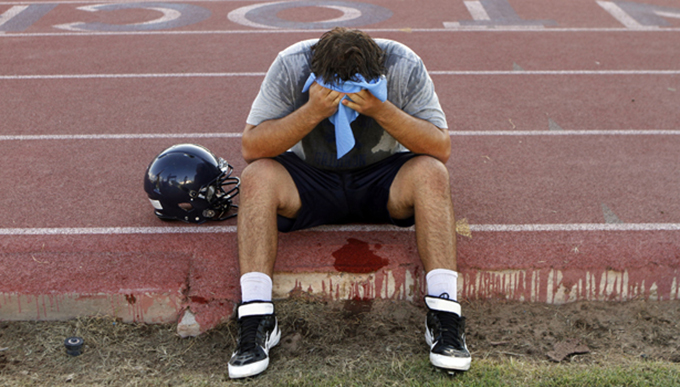 A coat hanger. A broomstick. A pool cue.

All these objects were used in a series of sexual assaults in recent years in which the perpetrators allegedly targeted high school boys who play sports.

The perpetrators always had easy access to their alleged victims. That’s because they were teammates.

In the world of education, sexual assault is often seen or portrayed as something that men do by overpowering women or girls. But as a sociologist who studies sexual violence and masculinity, I know there’s another form of sexual assault taking place at America’s schools that is just as harmful but which seems to get far less attention, perhaps because it’s seen as ritualistic “hazing” or characterized as “horseplay.”

It’s a form in which high school boys athletes – and sometimes middle school boys, too – assault other boys who are members of their team.

In peer-reviewed research published in Social Problems in 2021, I examine this issue by taking a close look at how a small American community responded to allegations that boys on the high school wrestling team had sexually bullied other boys on the team.

Prosecutors filed misdemeanor and felony charges against five defendants, which focused mostly on sexual assault and physical restraint. Some of the boys were facing up to life imprisonment. However, a conviction would prove difficult, as the allegations were portrayed as boys just horsing around, and many members of the community expressed concerns that its reputation was on trial.

To examine the case, I conducted in-depth interviews with one prosecutor and two defense attorneys; examined news accounts of the incident; and listened to audio recordings of police interviews with 21 witnesses.

What I found is that the community – mainly the boys’ school administrators, coaches and the boys themselves – were more concerned about whether what the perpetrators did was “gay” than they were with the effect it had on the victims.

No one disputed the facts of the case, only whether or not the actions were criminal.

They also expressed anxiety about how it would affect the community’s reputation as a whole if what the boys did was seen as a homosexual act.

One defense attorney told me that if the defendants had been accused of sexually assaulting girls, “they’d go along with” being referred to as accused rapists. But the dynamics were different, the defense attorney said, when the boys were accused of sexually assaulting other boys – an accusation they resented because it implied sexual behavior with another male.

Thus, what made these criminal charges so egregious – at least to some members of the community – was the fact that they called into question the presumed heterosexuality of the community’s star high school athletes.

The perpetrators, victims and male authority figures in the school community felt like the boys’ masculinity itself was threatened.

In the attacks that I examined, groups of boys from the high school wrestling team targeted individuals in dark spaces with little adult supervision, such as the locker room and on bus rides. The attacks were rapid. They typically lasted less than a minute. They usually involved several boys pinning down the victim, restraining his arms and legs, covering his face, punching his genitals and attempting to stick their bare fingers in his anus. Targeted boys, especially those who were assaulted multiple times, were often younger and smaller than the aggressors. The targeted boys reported different reactions in their interviews with police investigators. Some became fearful, agitated and reluctant to stay on the team. But others brushed it off as annoying but not a big deal.

In this case, coaches and other school officials reported they knew there was ordinary horse play – as they named it – but they didn’t know that it involved sexual assault.

The attacks that I studied are in no way isolated. In many ways, they mirror other sexual assaults throughout the nation that have involved high school sports teammates as perpetrators and victims.

For instance, at Plainfield Central High School in Plainfield, Illinois, varsity football players targeted two players for what the boys referred to as a “Code Blue” in the locker room after practice in October 2019.

“When one of the plaintiffs tried to run away, the players grabbed him and pinned him to the ground,” states a news account describing a lawsuit filed in the case. “They then allegedly pushed a broom stick between both students’ buttocks, resulting in penetration, according to the suit. The assault was so violent that the broom stick snapped in half.”

The lawsuit alleged that the school “had ‘longstanding issues’ involving hazing, and coaches allegedly knew about the hazing ritual and failed to act to stop it,” according to the news account.

It’s common for perpetrators to view their assaults as something other than sexual.

For instance, on the last day of practice in 2018, four junior varsity players at Damascus High School in Damascus, Maryland, turned out the lights in the locker room and attacked several teammates. The attackers pulled down the pants of one boy and shoved a broom handle into him through his underwear as he screamed. They did similar things to two other boys and stomped another as he fought off the broom attack.

At court proceedings in 2019, a judge said the alleged attackers “didn’t seem to grasp the seriousness of the attacks” and seemed to view their attack “as a prank or some kind of team-building exercise.”

As a researcher, I’ve found it difficult to pin down just how prevalent is the problem of adolescent athletes who sexually assault their peers in the same manner as the perpetrators in the case I examined.

Public Justice is a non-profit legal advocacy organization that tracks lawsuits involving sexual bullying, harassment and assault in K-12 schools. In its January 2022 compilation of jury verdicts and settlements, which includes cases from the past 20 years, 21 out of 334 of these lawsuits involved groups of boys sexually harassing and assaulting other boys, mostly in sports settings. Yet civil and criminal proceedings do not really reveal the scope of the problem.

The Department of Education tracks sexual violence in K-12 schools, but not specifically cases that involve athletes who attack their teammates. There’s a federal government campaign to stop bullying, but sports-related sexual assaults fall outside of what the campaign considers bullying.

There’s another barrier to getting an accurate picture of the prevalence of boy-on-boy sexual assault. Although victims of all genders may be reluctant to report that they’ve been sexually assaulted due to the stigma of being a rape victim, men and boys face a different type of stigma in disclosing experiences of sexual victimization because men are expected to be strong and fight off physical attacks. For that reason, male victims of sexual assault may be reluctant to report their experiences of victimization.

A focus on prevention

In the case I examined, the prosecution was largely unsuccessful. The defendants pleaded guilty to minor misdemeanor charges, which were substantial reductions from the original felony charges. The defense attorneys had effectively portrayed the assaults as funny, ordinary and a normal part of friendship among boys.

Preventing sexual violence in high school sports requires a multi-pronged approach. I see three things that merit priority status. First, federal agencies, such as the Department of Education, the Department of Justice and the Centers for Disease Control, could collect better data on the scope and nature of the problem. Second, prevention efforts can engage men and boys in promoting healthy forms of masculinity. Tony Porter’s advocacy with the NFL to prevent gender-based violence serves as a good model because it shows that prevention efforts are not just women’s issues. Finally, the forthcoming U.S. National Action Plan to End Gender-Based Violence could prioritize sexual violence in sports as a key issue.

Author Bio: Jamie L. Small is Associate Professor of Sociology at the University of Dayton