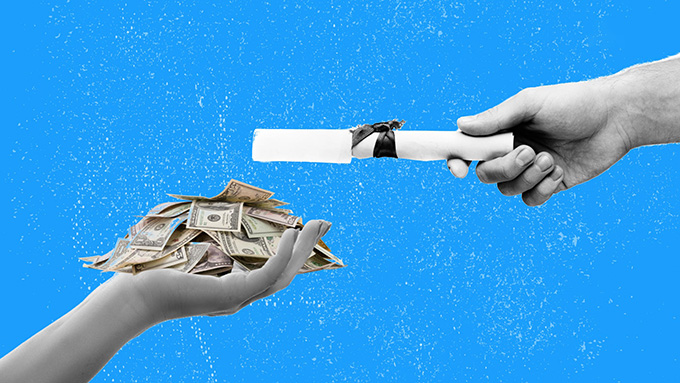 Community colleges are the ripest of fields for fraud. One might think that the for-profit schools would be the best, but for-profits get scrutiny, particularly from our state and Federal governments. As government-run operations, CC’s get a free pass from such scrutiny, and this allows endless breathtaking fraud.

I’ve looked at LACC a few years ago; they spend about 25% of their resources on 6th grade level material…not a good sign that this is what folk would call a legit community college.

So what have they been up to lately?

Again, non-state schools absolutely engage in highly questionable real estate deals, an easy way to launder the student loan money. The only difference is the state schools get to do the same with tax dollars.

In this case, we’re looking at $3.3 billion dollar bond…with that kind of money involved, it’s no great shock that there’s some corruption involved.

The whistleblower was the chief facilities executive overseeing this, and encountered many “issues” once he started oversight of the project. He made his complaints to the higher-ups at the CC, and they responded much as I’ve seen their like respond to faculty with integrity many times: they fired him.

One of his issues was how L.A. CC system, which has a stunning 200,000 students, really didn’t need the new space because it wasn’t using what it already had—spending over $4 million a year just on maintenance for the unused facilities.

Now, the case is still open, so perhaps I’ll lets the courts pass judgement before I do. Let’s take a look at another ongoing issue at L.A.’s community college system:

LA College Gets Flak Over Public Use of Taxpayer-Funded Track

So, this, massive, huge community college system has a track. I’m not expert in such things, but it’s top of the line:

Community members say Los Angeles Valley College used taxpayer money to build a $4 million state-of-the-art stadium, but is limiting public use of the track to one morning per week…jewel of the stadium is its 10-lane rubberized track. The school says is the first of its kind in California.

Because these schools are taxpayer funded, the facilities are often available to citizens, not just students, although naturally the school gets top priority. I guess the CC’s track team uses it often?

LAVC doesn’t have a track team, so outside of some physical education courses, it seems like it is seldom used.

Wow, all that money for a track, they don’t have a team, and they don’t want the public using it, either. Granted, I’ve seen similar ridiculous wastes at a community college, and this is hardly different than building a 5 star restaurant on campus just for the Poo Bah.

Am I really the only who might suspect some of the gigantic sums of money going into these building projects are really just flowing into administrative pockets? It’s a shame only a government would have the resources to do a full investigation of such a large building project, following all the money, because we know full well the government won’t investigate itself.

The CC here defends its action by saying it’s a public safety issue, and they just don’t got the money to hire someone to watch the track while the serfs use it (this is a system with more admin/staff than faculty, by the way):

In talking with athletic and facilities directors from several public colleges and schools, they say they never heard of an outdoor track requiring a paid employee to sit and watch people work out. They also said they haven’t seen a track surface vandalized.

They don’t have the money to hire a security guard, but they have money for payouts:

It really is amazing the stuff that goes on in these schools. We’re told that these community colleges, and the grotesque sums of money spent on them, are justified because of the benefits they offer to the community.

This leads to the true fraud: these schools certainly collect tax dollars, and it’s clear they don’t spend that money when it comes to real estate. They do even worse when it comes to education. The bulk of the resources at these schools are spent on remedial programs, even though it’s well known that a high majority of remedial students fail, get nothing out of college but wasted years and debt.

Perhaps Los Angeles’ community college system has used it’s great experience with so many students to justify all the money the taxpayers “generously” “give” to it. What kind of success does this system have? Well, one thing government does well is keep records (unless it involves our highest officials, of course—hi Epstein!), and so it’s easy enough to find out:

To emphasize: the school knows the above statistics because they submit them. They know what they’re doing wrong, know that they’re wasting money on educational fraud, but keep on doing it.

That completion rate is over a 3 year timeline, a bit of a problem when you consider we’re looking at a system which claims to have 2 year degrees. If we went to a 2 year completion rate, it’d likely be closer to 2% (a widely varying national average, with sub-1% rates quite common).

Ultimately, this is the real fraud of LACC and, frankly, most community colleges: they’re not colleges, and they don’t educated. But they do build nice palaces for their leaders, so there’s that.