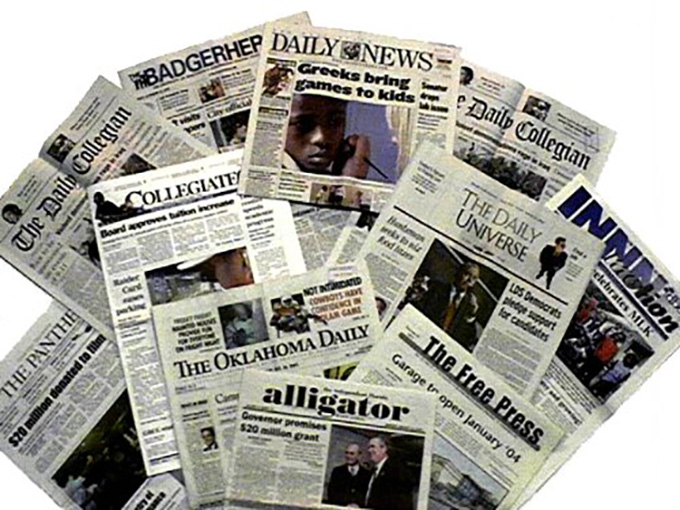 The week of the press at school organized each year makes it possible to make pupils aware of reading newspapers, to hear journalists talk about their profession and to understand the interest of a pluralist press.

It is also an opportunity to discover the productions of the pupils and the media that they develop in their establishments. On the occasion of an exhibition on the high school press, organized at the Maison de la Radio , let’s come back to some highlights of its history. Over two centuries of existence, these media are indeed a mirror of the concerns of young people and their relationship to current affairs, politics and the world around them.

High school newspapers appeared as early as the 1820s. We have proof of this through the testimonies of contemporaries, which unfortunately have not been preserved. The first ones that have been saved date from the Second Empire, in the 1860s. Although these newspapers were banned, they circulated in schools.

An 1868 newspaper, La jeunesse , had a courageous editor, Alfred Sircos. The latter, despite the obstacles, managed the feat of publishing for more than a year this fortnightly which describes the school world, the harshness of the boarding school, the boredom during lessons and the concern of high school students for their future.

From the laws of 1881 which established true freedom of the press, high school newspapers multiplied . Les Droits de la Jeunesse , a weekly newspaper, made history in 1882. The newspaper addressed itself directly to the minister in charge of school education, made proposals on the content of the programmes. He appeals to the major newspapers, asking them to open a weekly column for him.

The newspaper managed to appear in Paris and in Lyon, Marseille and Lille, being relayed by a national high school club. In the 1890s, the news made its mark in the columns of the youth press with a hot topic, the innocence of Captain Dreyfus.

At the beginning of the 20th century, the high school press , although having no legal existence, continued to spread and multiply throughout France. During the Second World War, underground newspapers appeared, written by students and high school students, some of whom joined the ranks of the resistance fighters.

During the 1960s, the high school action committees, created in December 1967, demanded freedom of expression in high schools. There are about fifty in France, including twenty in Paris.

The events of spring 68 will accelerate the impetus. In May 68, thousands of tracts and ephemeral newspapers appeared, written by students and high school students. For titles written solely by high school students, the duration and conditions of existence remain very precarious. Press organs are banned in high schools, which allows the administration to crack down on editorial teams when they are known.

The end of the 1980s once again became conducive to high school students speaking out in the public space. Political decisions profoundly modify the status of high school students and allow the legal recognition of their press organs. In 1989, the Orientation Law established the Council for High School Life (CDVL) with the aim of “giving its opinion” and “formulating proposals relating to school life and work”. The fall of the Berlin Wall the same year excited the high school press.

The news selected and treated by the high school press comes in three layers. The first is linked to adolescence, characterized by puberty, which is accompanied by significant bodily and psychological changes. This puberty news is crossed by questions about otherness, desire, sexual relations. Articles can adopt a tone of humor (advice is given to please the opposite sex), use a poetic form, or approach the issue from a societal angle, dealing with the issue of sexual orientation, gender stereotypes or homophobia.

Concerns about the baccalaureate and the pursuit of studies in higher education are also largely addressed. The field of possibilities in adolescence causes a certain vertigo. The high school years are decisive for gradually orienting oneself. To the stress of the baccalaureate exams, is added the anxiety of the post-baccalaureate orientation.

The third layer, media news (understood here as all the information processed by the mainstream media), is extremely present in high school newspapers. This news – organized by the media agenda and what shakes or interests the social and political body – captivates high school journalists.

This news is not linked to the personal experience of young journalists, but is based on their media experience. What has been seen and heard, in particular by the media that offer audiovisual media, fully participates in their eyes in their overall life experience. In recent years, we have seen an increase in international news (US elections, migration crises, armed conflicts, terrorism), as well as the treatment of climate issues and international meetings concerning the protection of the planet.

The creation of a media in schools contributes to the media education of young journalists for several reasons. Writing articles taking into account the reader, using graphic tools, managing a budget, a work diary, relations with a printer are part of the know-how and interpersonal skills they acquire.

But above all, they say they are more sensitive to current events and their treatment by the major media, want to be better informed, and ask themselves questions about the reliability of sources . In 2015, the Minister of National Education believed that “there is no better media education than making a media yourself”. This is all the more true today.

Author Bio: Laurence Corroy is a University Professor at the University of Lorraine