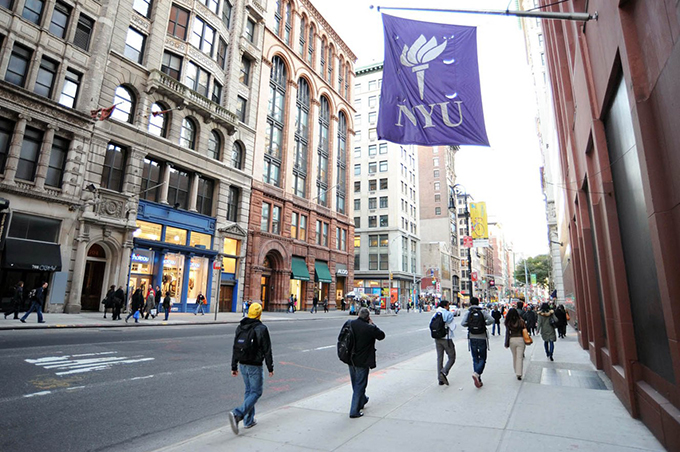 A report on NYU, an institution notorious for predatory practices on students, tracks the money it plunders. Administrative pay (and ridiculous perks, like 7 figure “forgivable loans”) only accounts for some of it, the rest is pouring into real estate deals.

I’ve mentioned the madcap building spree at our institutions of higher education, and many campuses across the country are massive construction sites, despite on-site student numbers dropping due to falling enrollment and increased emphasis on high-profit margin (and low-education) online courses. I haven’t gone into much detail because the real estate machinations are far removed from the faculty, as well they should: these things seldom have anything to do with research or education.

These adventures are funded by student tuition, and foreign students are particularly vulnerable to the predatory practices of NYU:

That year, all those students each paid some $9,000 more than the Americans attending NYU, thereby making NYU at least $100,000,000 in such extra revenue alone. That would be enough to put 540 students through all four years at NYU—and save them, in interest, somewhere from $34,698,240 and $72,270,900—if NYU spent it on financial aid instead of real estate and bureaucratic salaries.

The report makes many calculations like the above, showing how much the squandered money could have helped students, because that’s what educators do with money: ask how it can help with education. Administrators see money, and ask only one question: how they can get it in their own pockets as quickly as possible. It’s an important difference, and the shift in control to mercenary administrators is key to why higher education has, for the most part, turned into a system of plunder.

Real estate is all about the money, especially insider deals and massive kickbacks. NYU is located in Greenwich Village and thus cannot build, and build, and build, nearly as easily as other campuses, which are usually allotted huge tracts of tax-free land, for the erection of boondoggles. NYU, incidentally, is a non-profit institution, so the gentle reader should feel free to be outraged at the extraordinary (and unstoppable) abuse of power here. NYU gets numerous benefits because they’re non-profit, but where does that money go?

Let’s look at some of the real estate highlights:

“…but also from its global archipelago of high-priced real estate.

…’So, for housing in Berlin,’ reports a junior in Steinhardt, ‘I’m paying 3,569 euros to live in a suite with five other girls and share a small bed.’

…Typically, the rent in Berlin for a huge room with one or two roommates, in the hip younger areas of the city, can be as low as 400 euros, or 1,600 euros total

‘NYU requires Prague students to live in NYU housing,’ writes a junior in CAS. ‘While the dorms are nice, they are much pricier than renting an apartment in the same neighborhood.’”

Ok, this is more about gouging students, which is everyday practice at NYU…perhaps I’ll come back and list all the ways NYU puts the screws to students. It’s an impressive array of questionable business practices, I assure you.

Greenwich Village is about at urban as it gets, so NYU really can’t build in their location, and admin says it’s really not possible to do much:

“…we had long been urging NYU to do precisely that—meet our need for academic space by buying sites available in NoHo—only to be told that it’s impossible: “Zoning restrictions exist in areas (e.g., NoHo) proximate to the Core that prohibit University uses such as general classrooms,”

So, admin says it’s impossible to buy buildings. I’ve recorded so many administrative lies in this blog that it would be foolish to take what they said at face value. A few months later:

Thus, in late October, the Board (to quote the Daily News) abruptly “snagged” two NoHo buildings—404 Lafayette and 708 Broadway—for “a whopping $157 million.” This was “an attractive offer we could not refuse,” exulted Walter “Ed” Scheetz, the former owner (those buildings having cost him $96.6 million one year earlier).

Think about that: NYU paid 60% more for buildings than what the buildings sold for a year earlier. Has real estate really been skyrocketing 60% a year in your neighborhood? A reasonable person would wonder if perhaps there was a kickback or two involved…

Maybe admin bought these at such a huge premium because they were perfect for NYU, and wouldn’t cause problems with zoning restrictions? Not a chance:

“…the NoHo site will end up costing millions more than what the Board so generously paid its owner, since it requires extensive renovations (which, as of this writing…NYU hasn’t started). Nor is that the only NoHo property on which the Board is spending tens of millions…”

Wouldn’t it be nice if faculty could do something to stop the plundering of higher education like this? NYU might be the worst of the lot, but I seriously doubt it leads by much of a margin. Even if this isn’t just theft for personal gain, we have wild mismanagement here:

“…NYU has devoted $74 million to the “acquisition and renovations” of 383 Lafayette—the former Tower Records building, which NYU bought last year for $16 million…Despite NYU’s “urgent need for academic space,” the cavernous first floor of that four-story building—roughly 12,000 square feet—was lately used to house the “NYU ID Center,” and little else,…”

–the ID center is just a vending machine kiosk.

“…will have its brick rebuilt, parapet reconstructed, masonry and windows replaced, and receive reconfigured storefronts, a new entrance canopy, and a new marquee,” as well as “new utility structures” on the roof. At a cost (according to the Working Group) of $58 million, that huge facelift seems a bit excessive for an “academic” building with no teaching space (as NoHo News reported): “Upon completion, the building will be home to various administrative offices.”

I really want to emphasize how typical this is. I’ve been on many campuses where the administrative buildings are airy, sumptuously decorated palaces while the faculty sit in cubicles and students gather in partially lit rooms (no money for light bulbs due to budget cuts, you see…).

I often laugh when CNN is demonizing some ruler of a county, with news about the palaces he and his cronies occupy. I do wish CNN would turn its cameras towards our higher education complex. Can the gentle reader even imagine living or working in a place that just went through $58,000,000 of renovations, where every dollar was spent for comfort and beauty and nothing else? Meanwhile, the students are forced to cram themselves into massive auditoriums to be talked to by minimally paid adjuncts. No money, you see, budget cuts, yadda yadda…

“…that new administrative hive is costing more than we’ve been told. Beyond the tens of millions poured into the “acquisition and renovations”…NYU is spending further millions on a new construction right next door—a luminous four-story annex…won’t have its own entrance, Curbed reports, “from the outside, it will look like a new four-story building has been constructed,” with a glittering exterior of “aluminum, zinc, and glass”—and 56,000 more square feet of “academic space” that won’t be used for teaching.”

It really is remarkable how many campuses devote more space to administration than to education and research. We already know there’s a positive relationship between administrative pay and student debt, but I bet a study on the ratio of floor space devoted to administration/education would find similar results. Why can’t we use this information to start fixing higher education? Simply stop accrediting schools that do this sort of thing, and these sorts of boondoggles will cease being erected/refurbished.

(We note that CUSP will occupy that 14-story building’s top three floors, providing them with roughly 100,000 square feet. Since CUSP’s personnel comprise eight faculty, and ten research scientists and postdocs, apparently each one of them will have roughly 5,000 square feet to work in—quite a gift, considering NYU’s “urgent need for academic space.”)

Does anyone even know what “Urban Science” is, much less why so much space needs to be devoted to it? I know I don’t. Lots of money floods into mystery renovations:

“Whatever all those renovations cost, some at Poly question their necessity. “There is always some construction going on over the last year,” notes one engineer. “Worst of all, they are completely rebuilding the second floor of the Dibner Building, even though they rebuilt it just a year or two ago. Complete waste of resources.”

The report’s list of expenditures, hundreds of millions, on real estate is extensive, and all the more insulting because education never seems to be on the agenda:

> $180 million to construct “NYU Langone/Cobble Hill,” a 160,000-square-foot ER, to be constructed on the site of Long Island College Hospital (LICH)—a old and august teaching hospital that was allowed to die for lack of funds, and then sold off the Fortis Property Group …NYU is partnering with Fortis, which will develop condos there.

So, tear down the teaching hospital because, hey, no money (and nobody needs doctors, right?), and put up condos. I’m pretty sure the mission statement of NYU lacks a line about “tear down teaching facilities and erect condos.” Why, pray tell, would a non-profit institution need to build condos?

The above are part of just a short summary of all the real estate projects at NYU, managed by a fiefdom:

“…well over 100 projects under way in various stages of progress,” according to the Real Estate Development and Facilities Department (RED+F) at NYU/Langone. Those projects are ongoing throughout the city and beyond:…”

In addition to all these boondoggles, there are many mansions and expensive properties. A few highlights:

> $3.6 million for a luxury condo at 845 West End Ave., for housing Law School faculty. “The four bedrooms have ensuite baths with Calacatta gold marble, as well as radiant heat floors” (according to International Business Times).

> $3.5 million for a luxury condo at 166 Perry St., for housing Law School faculty. “The 1,875 s/f corner apartment … has a glass curtain wall and views of the Hudson River. It has two bedrooms, two bathrooms, a powder room and home office, along with 10-foot ceilings and a five-fixture master bath” (according to Real Estate Weekly).

> $5.2 million for a luxury condo at 455 Central Park West (“a 26-story tower attached to the French Renaissance chateau at W. 206th St.”), for housing Law School faculty. “The duplex apartment has a round living and dining room with 37-foot-high ceilings and Central Park views, along with three more conventional bedrooms” (according to Above the Law).

Supposedly these are for housing faculty, but the report tells the truth of the matter:

NYU also has allowed the president to hand out valuable favors unofficially. For his son Jed and family, NYU provided two faculty apartments at 240 Mercer, combined into a duplex, although Jed Sexton had no NYU affiliation…for Pres. Sexton\’s good friend Henry Louis \”Skip\” Gates, NYU provides a luxurious two
-bedroom faculty apartment at 120 W. 15th St…with no affiliation here. Both stories were reported by the New York Post, which noted that the lucky tenants paid, or pay, discounted rent, as if they were NYU faculty.

One can only expect those other mansions “for faculty” are likewise just being used for administrative purposes. I’ve only summarized the highlights of the report, but please understand: that vast bulk of money NYU has acquired for these activities is through the student loan scam, which is supposed to provide money for education…not administrative palaces, luxury mansions, and condos.

Shutting down the student loan scam altogether is another.
www.professorconfess.blogspot.com