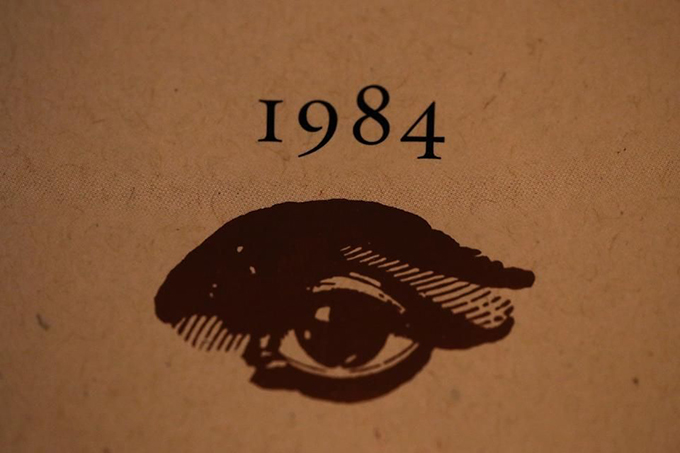 1984, written in 1948 by George Orwell, tells the tale of a society in the year 1984 that is under constant war, and ruled by a dictatorship that uses tight surveillance and mind control to police its populace.

The main character, Winston Smith, is a civil servant of the ironically-named Ministry of Truth, responsible for carrying out the State’s historical revisions in order to maintain control over the individuality and intellect of the people (or Proles, as they are called).

Some of the novel’s themes include nationalism, sexual repression, censorship, and privacy. Many of those subjects, and various scenes within the story, have stuck a nerve with people for its close parallels to actual events of the 20th century. In that respect it’s both sardonic and apt that it would wind up on the ALA’s list of the most commonly challenged classics.

Shortly after it was translated into Russian it was banned in the former U.S.S.R.

Some early reviewers suggested that it was a commentary against Joseph Stalin’s infamous “midnight purges;” though, ironically, parents in Jackson County, Florida, would make the challenge in 1981 that it was “pro communist” and that it contained “explicit sexual matter.”

Many of the terms and concepts in the novel, such as Big Brother, thought crime, newspeak, and memory hole, have become part of modern language. It also popularized the adjective Orwellian, which refers to lies, surveillance, and manipulation of the past in the service of a political agenda.

References to the themes, concepts, and plot of 1984 have been found in film, stage, bands, music, literature, comics, radio, video games, and art. For example, it was a main component in one of my favorite Star Trek: The Next Generation episodes, “Chain of Command,” which was produced in cooperation with Amnesty International for its themes of terrorism, torture, and prisoners of war.

Madred’s usage of four lights during the psychological torment of Captain Picard is a direct homage to 1984, when O’Brien tortures Smith until he admits that he sees five fingers, when O’Brien clearly only holds up four.

Orwell was alarmed that factions within America were using his novel as propaganda for their political views. Between 1965 and 1982, the book ranked 5th on the list of most challenged titles for being “immoral and pro communist.” It is currently 9th on the ALA’s list of banned classics.

In a rather ironic incident, bookselling giant Amazon deleted both 1984 and Animal Farm from its Kindle database in 2009. The world’s press agencies called foul, accusing Amazon of censorship; but it turns out the copies were sold illegally from an independent publisher, as 1984 is still under copyright protection until 2020.

According to CNET, when Amazon discovered the unauthorized sales it did the right thing by deleting them from users’ Kindles and refunding them the charges; but what it did wrong was failing to explain the situation and disclose the fact that it could remotely delete books without a user being aware of it.

Amazon learned from its mistake and will no longer remotely delete books.

The book is commonly removed from U.S. schools under the “pro communist” argument; and ironically enough, for being considered “anti-government.” So, on one hand it’s alleged of being for a particular governmental form, but on the other hand it’s challenged by others for not supporting any government whatsoever. Okay, then.

Some parental groups take issue with the sexual interaction between Winston and Julia, and questioned it as being “too gloomy and depressing” for school-age readers because of its bleak vision of the future and having no “happily ever after” ending. There are also arguments against the scene I mentioned above, when Winston is brutally tortured in the headquarters of the secret police, the Ministry of Love.

It has been nearly 3 decades since the year 1984 faded into the history books, and 6 decades since Orwell released the book, but the themes of his novel are still disturbingly relevant today. With the social, political, and economic problems we face in the 21st century, and with multiple wars currently spanning the globe, the three slogans of the Party resound with an ominous and bone-chilling effect:

“WAR IS PEACE.
FREEDOM IS SLAVERY.
IGNORANCE IS STRENGTH.\”

The message of 1984, and our own real-world battles with censorship, can be summed up in one of the most impactful quotes in the novel’s dialogue: “If there was hope, it must lie in the Proles, because only there, in those swarming disregarded masses, eighty-five percent of the population of Oceania, could the force to destroy the Party ever be generated. Until they become conscious they will never rebel, and until after they have rebelled they cannot become conscious.”

With classics like Mark Twain’s Huck Finn being rewritten to replace words like nigger with slave, and Injun with Indian, we find ourselves stepping ever closer to a world of revisionist history, where instead of learning from the mistakes of the past we erase it from memory altogether.

A somewhat foreboding quote I made before I had even thought of, or selected, 1984 as this week’s featured title seems apropos to the discussion, “When the proponents of ignorance threaten to put chains and locks on freedom, be the key that opens the mind.\”

Ignorance is not bliss, it’s a nightmare.