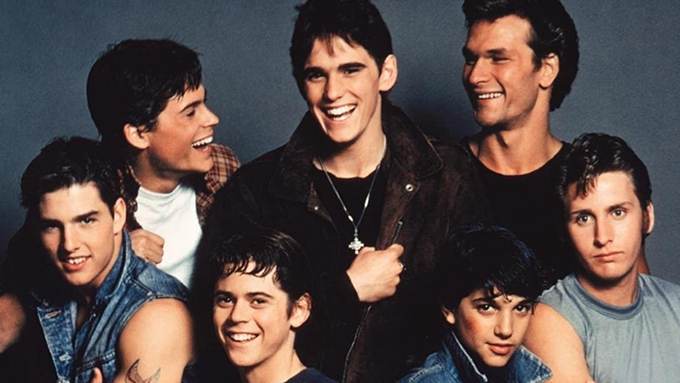 The book follows two rival groups, the Greasers and the Socs, who, divided by their dissimilar socioeconomic status, hold on to what they can amid the turbulent social changes of the 1960’s.

Many remember the all-star cast in the 1983 film adaptation by director Francis Ford Coppola, in which Hinton played a cameo role as a nurse.

Coppola didn’t plan on making a film about teen angst until students from Lone Star Elementary School in Fresno, California, wrote to him about adapting The Outsiders. After reading the book, he was moved not just to direct “The Outsiders“, but to follow it the next year with another S.E. Hinton novel, Rumble Fish.

To create tension among the actors playing the rival gangs, Coppola devised a scheme, whereby those cast as Socs were given luxury hotel rooms and leather-bound scripts, while the Greaser cast was put on the hotel’s ground floor and received tattered scripts. The cast played pranks on each other and the hotel staff during the shoot. Years later, Tom Cruise met someone who worked at the hotel, and when he realized it was the same hotel where he and the rest of the cast had stayed, his first words were, “I’m sorry.”

The Outsiders was quite a controversial book when it was released, and it remains so today.

In 1986, it was challenged in South Milwaukee, Wisconsin for its inclusion on an eighth grade reading list because “drug and alcohol abuse was common and virtually all the characters were from broken homes.”

It is ranked #43 on the American Library Association’s Top 100 Most Challenged Books of 1990-2000 and has been banned from some schools and libraries because of its portrayal of gang violence, underage smoking and drinking, strong language, slang usage, and exposé on family dysfunction.

In 1992, it was challenged in the Boone, Iowa School District because the book was seen as glamorizing smoking and drinking and uses excessive violence and obscenities.

It was challenged in 2001 at George Washington Middle School in Eleanor, West Virginia due to objections to the focus on gangs and gang fights.

The book was written about teenagers by a teenager, and parents generally objected, claiming that their children are being exposed to things they aren’t prepared for and insist schools pull it from their curriculums; some also say it promotes “unchristian values” and site its lack of adult role models.

The Outsiders is a theme in itself. Looking at life as an outsider and feeling as though one is being treated as an outsider is a matter of one’s point of view.

Teenagers typically consider themselves to be adults, but in reality teens are still under the control of others telling them how to live their lives- parents, teachers, and other authority figures. This loss of control inevitably leads to the feeling that life isn’t fair.

Ponyboy sees injustice on a daily basis. His parents are dead, Darry works two jobs to support the brothers, Soda has dropped out of school, and Greasers are looked upon as “white trash.” He sees gang warfare as a war between the economic classes. Because he is from the poor side of town, his place in life is unfairly predetermined.

With that in mind, another theme is the use of colors in a black and white world. Adolescents see the world in absolutes. You are either Socs or Greasers, rich or poor, good or bad. Hinton descriptively uses color throughout the book to define and add depth to the characters in their environments.

Some wonder if the world as seen by Hinton in the 1960’s has any place in today’s world, as society has changed so much since then. Or has it?

Not even 20 years passed before The Breakfast Club hit the silver screen. The parallels are quite remarkable between the two stories. The social issues of alienation and cliques adapt with each generation. Teens still engage in a battle of wills between their home life, social life, and personal thoughts. Gangs are still very much a part of life, and as teens fight to find their place in the world they still experiment with drugs and alcohol.

So, yet again, we have naysayers who want to sweep these issues under the rug as if they do not exist, instead of openly talking about them in rational, intellectual circles. They fail to realize that some of the reasons we cling to literary favorites is because the characters and the situations are relatable.

The Outsiders has won the New York Herald Tribune Best Teenage Books List (1967) and the Chicago Tribune Book World Spring Book Festival Honor Book (1967). It has also won the Media and Methods Maxi Award and was named one of the ALA Best Young Adult Books, both in 1975. In 1979, it won the Massachusetts Children’s Book Award.