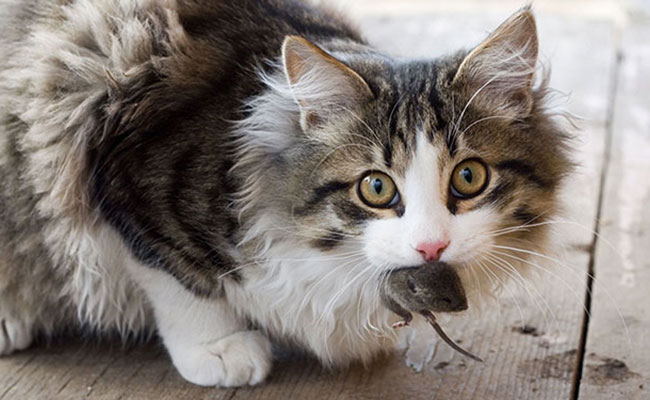 Anyone teaching in higher education a few decades comes to the conclusion that something is going wrong. There’s a clear trend of enstupidation of our children. It’s not our imagination, as simply reviewing old tests, even old textbooks, shows that the material we cover in class today simply isn’t on the same level of a few decades ago.

I’ve blamed Education, that field of study which, laughably, claims to strive to improve human learning, despite their endless array of massive failures, most lately being Common Core (ok, it hasn’t failed yet, but there won’t be much surprise when it does).

Turns out, I could be wrong. Oh, Education is irrelevant at the very least, no question about that, but a reader sent me a video discussing Pottenger’s Cats. It’s only 15 minutes, and worth a view.

I’ll summarize. Pottenger was experimenting, like actual scientists do, and noticed that the cats (accidentally) being fed raw meat were markedly healthier than the cats being fed cooked meat. So, he scrapped his original experiment, and designed new experiments around the hypothesis:

Unlike the utterly untestable hypotheses that seem to dominate “science” today (I may need to talk about this soon), this is the sort of thing a real scientist can answer, probably. It’s a simple matter to just vary the diet of the cats, using either cooked or raw meat, or raw or pasteurized milk (or other processed options).

Naturally, we’re just talking about cats here, and so the results may not apply to humans…but the results are noteworthy.

First, the cats fed processed milk had clear physiological differences—dental deterioration was clear, and the cats, when tossed, were even hard pressed to land on their feet (I don’t even know if such an experiment would be allowed today, since it’s obviously cruel to the cats…). The cats fed raw milk were nothing like the sluggish, sickly cats.

It’s particularly disturbing watching a “raw milk” cat get into a fight with a “processed milk” cat…the latter appears to move in slow motion compared to catlike speed (hey, that used to be a cliché) of the healthy animal.

Now, all the cats were selected to be healthy at the beginning of the study, but the ones with the processed food diet clearly sickened over time. Fair enough, an interesting result.

Now comes the amazing part of the study.

As these cats bred, the sickened cats passed on their weakness to the next generation…by the third generation, the skeletal deformities are unarguable, and there couldn’t even be a fourth generation, because the cats were so sickened by a cooked meat diet.

And it gets even more amazing.

To bring the second generation “processed food” cats back to health, it wasn’t simply a matter of returning to a healthy diet. No. It took four generations of feeding the cats properly before the cats that had the bad diet in the past were indistinguishable from cats that were fed proper (cat) food all along. The experiment ran for 10 years, to give an idea of how long it took to show this.

As a final insult to injury, after the experiment site was abandoned…the very weeds in the “healthy” food pens were far more robust than the sickly weeds in the processed food pens.

Unlike modern science, which has a real problem with many experimental results that can’t be replicated, this old experiment was corroborated with similar experiments (although, I admit, never perfectly replicated). I grant that there are some issues with the experiment, and it’s really bizarre about the weeds: could it just have been bad luck that the soil for the “processed” cats had high levels of lead or arsenic in it? It’s impossible to say, and cats are not people in any event.

Nevertheless, as I watch, from one generation to the next, a clear degeneration of our children’s mental ability, could it be that I’m wrong about blaming government schools and Education? Could the soaring rates of autism and a few other diseases not be due to vaccines, but instead is just the latest generational symptom of our insidiously bad diet? Well, maybe.

I grant that the Amish (with a relatively stable diet the last few centuries, for obvious reasons) don’t seem to have the epidemic of debilitating diseases affecting the “standard” American, so I suppose there’s something to the theory even if the experiment has issues. I’m not saying we all should eat raw meat and drink raw milk (it’s weird how the government hates raw milk, however), but, I do concede we as a people need to start eating healthier. It kind of bugs me that I’m well past double the age of my students (even triple for a few of them), and yet seem to be more physically fit than many of them (and I’m not a health nut, not by a long shot). In addition, way more students are declaring/documenting themselves as mentally disabled (and thus entitled to extra breaks) than when I started in higher education. I’ve gone from sometimes having 1 disabled student a semester to now typically having 8 disabled students a semester, over the last 30 years.

Some might say there’s a conspiracy going on, but we don’t really need that here. Corporations make our food, and corporations care about one thing and one thing only: profit. I’m not saying this to slander corporations, I say it with the same hostility as I might say “mosquitoes suck blood.” It just so happened that processing food means less waste, and that means more profit; a corporation simply is incapable of caring if its food eventually kills the customers (cf, the tobacco industry).

Typical number of baby gerbils that survive on purified water: 5

Number of gerbils that survived when I gave them tap water instead: 1

–I used to have pet gerbils. This is not exactly a scientific experiment, but I do think one should be careful giving tap water to the young, rodent or otherwise. I mostly drink bottled or filtered water now. Obviously.

Anyway, maybe I’m wrong, and the enstupidation of our children is not due to the Educationist claptrap, and is simply the result of our poor diet. The gentle reader should seriously work to provide his children with healthy food…it’s not that hard to make lunches out of apples and raw vegetables, at the very least.

And keep the kids away from Educationist theory. Just to be sure.