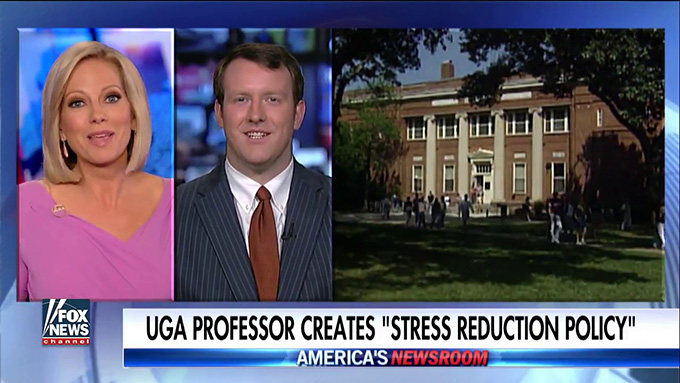 A few weeks back, another odd story from higher ed made the rounds. A professor decided on a new grading policy:

Hey, grades are stressful, even assigning them isn’t fun.As a student I hated getting grades…I particularly hated bad grades, which is why I generally studied hard enough not to get those.

Let me share some personal anecdotes here before moving on.

The worst grade I ever got in college was a ‘C.’ It was in an undergraduate mathematics course, and, for newcomers to the blog, I teach college level mathematics today. In terms of numbers, the professor was generous to give me a C; I failed every test, spectacularly. Actually, almost every student in the class failed every test spectacularly. The professor was a great lecturer but his tests were ridiculous. After I failed his first test, I studied very hard for the second test…and failed it, too. For the third test, I walked into class with literally the previous month of material memorized verbatim…still failed. I imagine I failed the final (can’t even remember), it wasn’t until years later I learned that he was teaching from a different book than what the students had (because I took another course and noticed that the book would been great to have for his class…I aced that other course, and it was a course many other students failed).

Despite all this, it never once occurred to me to beg him for a different grade.

The only time in my entire college education that I asked for a better grade was with my Physics professor. My average from homework and tests was a 89.6. I’d scored A’s on 2 tests and the final, but he was giving me a B because the cutoff for A was right at 90. He did this because so many students had perfect 100’s on all the tests that he didn’t see any reason to give me a break. He had a point, but I do wish he’d believed me when I told him the reason for all the perfect scores was the fraternities had the tests and answers in advance1.

Times have changed, and now we have a new idea: just pick your grade:

The “Stress reduction policy” is outlined in the online syllabi for two of Richard Watson’s fall business courses, “Data Management” and “Energy Informatics.”

“If you feel unduly stressed by a grade for any assessable material or the overall course, you can email the instructor indicating what grade you think is appropriate, and it will be so changed,” the policy reads. “No explanation is required,

Now this story made the rounds, and people with some understanding of education realize this is idiocy, chastising the professor for making this silliness official by putting it in a syllabus, making grades utterly, and officially, irrelevant.

Did I mention that the worst grade that I, a mathematics professor, ever received was in mathematics? Did I mention that it motivated me to study harder? That’s the point of grades, you see, to give students something to work for. Yes, they’re goofy and not really worth anything when it comes down to it but they are, indeed, a motivational tool, a tool that we’ve been using for a century or more because it works so well, especially relative to the cost (zero) of a grading system.

It’d be nice to have kids study for the sake of pure knowledge but…they’re kids. Sometimes you have to manipulate them a bit while training them to do the right thing. Grades, like Santa Clause and the Easter Bunny, aren’t necessarily real things to worry about…but they are useful in the hands of responsible adults.

But this professor is apparently going to irresponsibly toss them from his business courses. People reading about the professor’s actions are understandably outraged, but there’s more to the story, by far:

Richard Watson is the J. Rex Fuqua Distinguished Chair for Internet Strategy at the University of Georgia’s Terry College of Business.

So, Professor Watson is the J. Rex Fuqua Distinguished Chair For Internet Strategy. Hmm, that’s quite the title. Lots of departments have Distinguished Chairs for something-or-other, it’s a good use of donated money: use that money to hire a professor, hopefully one who espouses the beliefs or practices of the donor. He’s also received a Regent’s award, giving him a $10,000 a year bonus for his very successful scholarship (the gentle reader should note carefully how awards for scholarship are roughly 1% of the awards Poo Bahs get for anti-scholarship activities…we should probably ask questions about this being the right way to run a scholarly system).

There’s more on the syllabus than just the “free grade” policy. The syllabus specifies all assignments are open book, open notes, even open laptap, that the tests will only assess very basic understanding of course material, and so on.

This guy’s a real academic, why would he engage in such a ridiculous policy? His university received considerable (and justified) bad press for it, and had to step in:

This important correction didn’t make the rounds like the first reports, but hey, not everyone can follow these things so closely. Allow me to quote from the above:

“A recent online report published a syllabus that a Terry College of Business professor had placed on his website. The syllabus stated that his grading policy would allow students inappropriate input into the assignment of their own grades. I want you to know that the syllabus did not conform with the University’s rigorous expectations and policy regarding academic standards for grading…Rest assured that this ill-advised proposal will not be implemented in any Terry classroom.”

Wow! Admin is now formally stepping in and setting grading policy. This is a big reach for admin, as they’ve lost such attempts in the courts, and like most everything admin does, is wrong. The gentle reader is probably wondering why I’m not cheering admin’s decision here. It’s because there’s so much going on behind the scenes in higher ed, and I’m sure some of it’s happening at this university as well.

–from the original syllabus.

I’ll be using conjecture here, but my years in higher ed put me in a pretty good position to fill in the blanks. Reading the original syllabus more carefully (he changed it, but you can find the original here, it’s loaded with deliberate idiocy) it’s very clear there’s more here than what we saw at first glance. He’s daring admin to do something about it.

Our professor here is a legitimate scholar and academic, with decades of experience, and tenure. He’s been teaching real courses for years, but has noticed that in his advanced courses, he’s getting students that, simply, should not be there. It’s starting to happen often now, and some professors respond by failing the whole class (with admin again stepping in to overrule the faculty). These fake students are going to admin and complaining that they just can’t handle the stress of a real college course. Admin has been pressuring the professor to change his course into a fake course. He’s refused to do so, and even uses real grades.

In this case, our professor didn’t fail the whole class, but he did fail students…and even failing a few students is something admin will not tolerate, no matter if they have it coming. Our professor is at the top of his game, however, admin can’t threaten him with denying a promotion or anything like that.

Still admin has these complaining students coming to them, asking for better grades. Admin asks the professor nicely, but he won’t do it and admin doesn’t have control over him like they do with your typical adjunct (which is the reason why adjuncts are so common on campus, and why we’re seeing “advanced” students who have degrees but can’t read or write now). So, admin just stepped in and changed student grades. The professor knows it’s happening…he dared admin to make it written policy that admin controls grading. They fell for it.

My blog has documented administrators doing the like before, and I’ve seen it with my own eyes as well (at a community college). Please understand, at a large school a professor can easily not notice when a student’s grades are being changed surreptitiously…it wouldn’t surprise me to find it’s far more widespread than one might guess from the rare reports in the media.

So, now let’s put that joke of a syllabus in perspective. The professor knows that admin was changing student grades, and doesn’t like the fraud turning his school into a joke. Since he can’t change admin, he turns his syllabus into a joke, because he knows this is what admin wants him to do: run fake courses.

And admin has now declared that, yes, they control grades now. He’s going to want that well documented, for later. Let’s give it a semester or two to see if admin’s actions come back to haunt them.

At the risk of making Paul Harvey roll over in his grave…”And now you (probably) know…the rest of the story.”

1)  To be perfectly honest, the reason why one of my test grades was a 90 was because one of the frat boys had inadvertently shown me a page of the test we were about to take, and one of the questions I saw was one I would have missed otherwise…so I was a little conflicted arguing for a better grade as my “true average” should have been closer to 86.