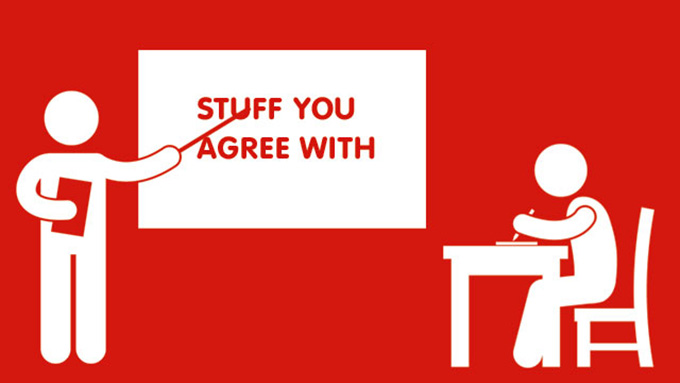 I believe in academic freedom, that I generally don’t have the right to tell another professor what should go on in his course. I also believe in academic scholarship, and I’ve witnessed so many violations of this latter concept that sometimes I wonder if maybe this “freedom” thing is being used irresponsibly.

Not every field is quite as straightforward in mathematics, but I do wish departments existed like they used to, instead of, all too often nowadays, collections of similar-degree-holding faculty ruled over by an administrative hatchet-person (not all places are like this, but most of the places I’ve taught at are).

As a department, faculty could influence each other’s courses. For example, if a statistics professor started teaching ways to make decisions that involved reading goat entrails and interpreting astrological star charts, the rest of the department could say “no, that’s just not how we want that course taught” and such silliness would stop (even as I acknowledge that such ancient methods were precursors to statistical analysis).

Granted, in mathematics, there aren’t too many controversial subjects to discuss, but I know full well that if I tried to advance anything but the only acceptable point of view on campuses nowadays, I’d be chastised, if not removed.

Student: “This course is a waste of time!”

–many students complained of the courses of a very-favored by admin professor on campus, because all her students always got A’s. Students knowingly wasted their time, of course, because of the lure of the easy A. Admin had only praise for the professor, because her course sold so well…

Nowadays, there are many courses on campus that are just plain silly. Administration wants such courses, because they sell well and keep students on campus, consuming “empty calories” of coursework that applies to nothing. Some courses, however, aren’t just silly, they’re biased, and the bias is so extreme that even the students know something just isn’t right, that the courses don’t really qualify as even remotely academic work.

A website actually gives a cash award to the three “most” biased courses, as reported by students. Granted, all we have to go by are the student reports, and the course description, but these courses do seem to be a bit questionable:

Third place goes to The Refusal of Work, a 3000-level (that’s third year!) course in the American Studies department at Cornell. This is a 4 credit hour course, which is pretty hefty by today’s standards, where even fairly advanced material is addressed in 3 credit hour courses. The course bills itself as a critical reflection on the “refusal to work,” looking at all the ways we as a people attempt to “remain human within modernity’s regime of coerced labor.”

At first glance, I was willing to accept that this was a strange, but legitimate course, but phrases and words like “coerced labor” and “regime” rather make me suspect something else is going on with the course. Then comes the line that puts fear in me:

We will also attempt to understand how this regime was installed, and its necessary entanglement with private property.

I’m more than willing to consider that today’s system of “work from 18 to…” well, we were told until 65, but it for many of my friends the ol’ benefits seem to vanish as retirement nears, so let’s just say “…death,” then “pay 28% of your life in taxes, then another 75% in inflation, and anything left over goes to pay medical costs at the end.” There are some questions there well worth asking, like if that’s really a good system for everyone.

But that’s not the “regime” being referenced here, especially with that “entanglement” with private property concept. I suspect there are some distinct socialist principles here being advocated; I trust, if I’m right, the professor at least has demonstrated he honestly believes in such principles by giving away everything he has to the government, including, of course, all his private property.

Ok, maybe I’m just being cynical here, and perhaps there isn’t as much bias in the course as it appears from the description, but the next course is pretty blatant:

Taking Marx Seriously is a 4000 level political science course at Amherst. Now, this level of course is incredibly specialized, I totally expect the material in this course to be every bit as arcane to me as the topics in my 4000 level math courses would appear to the gentle reader (eg, “Describe a 4 dimensional bottle” is a 4000 level mathematical concept that I understand most would consider ridiculous). While mathematics can be pretty bizarre, I do concede from the course description it appears there may be some bias here as opposed to simple pedantic minutiae:

“Has Marx’s credibility survived the global debacle of those regimes and movements which drew inspiration from his work, however poorly they understood it?”

Ouch. Just, ouch. However (dementedly) brilliant Marx was, the sad fact remains that his ideas got tens of millions of human beings killed. One of the saddest parts of this sad fact is that apologists keep claiming that all these deaths aren’t really because of Marx, because the communist leaders weren’t following “true” communism. Bottom line, Marx’s ideas have been tried, and tried, and tried, again, and every time it ends in horrific death, mass horrific death, and incredible misery for the human beings that survive all the death. To say it’s not “true” to his ideas is irrelevant: attempts to follow those ideas have caused so much harm that we need to be extremely limited in following them in the future, if not abandoning them outright.

What’s particularly frightening about this course is it will rely exclusively on Marx’s work, without using any other sources. Uh, hello? All those disasters occurred because people were ignorant of what would happen if they followed Marxists. Perhaps the course is trying to create more disaster?

My courses may be pretty arcane by “normal person” standards, but I’ve never heard of a mathematics course that deliberately throws out a bunch of information, particularly disagreeing information, and I trust anyone can understand that “scholarly investigation” and “ignore information, especially information that disagrees with you” aren’t interchangeable concepts.

Except in this course, apparently.

This previous should be tough to top, and I just don’t see how the winner is more biased, but here goes:

First place goes to Stanford’s History of the Police in the United States: Slave Patrols, and (unless I’m wrong about Stanford’s numbering) is a graduate level course.. Amazingly enough, this is a 5 credit hour course; a thorough discussion of Newton’s ideas in calculus isn’t even 5 credit hours, to give some idea of how things may be a bit overblown here.

Now, don’t get me wrong, it’s pretty clear the primary reason for having a police force is to keep the lower classes in line (I politely ask any doubters to note what happens when there is rioting, and to carefully determine if the police’s efforts are focused on keeping the upper class, or the lower class, contained). But this isn’t particularly a slavery issue, since every country on the planet regularly uses police in this fashion, even countries that never had a US-type slave society.

Unfortunately, the question of why governments inevitably find the need to employ armed people against their own citizens isn’t going to come up, as the course sure looks to be more racially themed:

Much like with the previous course, it’s a grievous, non-scholarly, mistake to throw out information that the whole rest of the world can provide. Is this course more biased? I guess opinions can matter, and I do at least appreciate that this course will teach students how to properly consider “primary sources such as police memoirs, court records, police files,…” So, even as I question the premise of the course, I acknowledge there are some useful things here.

Bias is in the eye of the beholder, of course, but these last two courses especially, in a department that talks amongst themselves, should have had an academic or two raising his hand to ask “How can we have such a course when there are so many counter-examples destroying the premise of the course?” or “How can we call this academic study when bias will preclude the course considering opposing points of view?”

The simple fact that courses like these are in such abundance on campuses that we can have competitions and award prizes among all the contenders does at least answer the question: “is there indoctrination on our campuses today?”