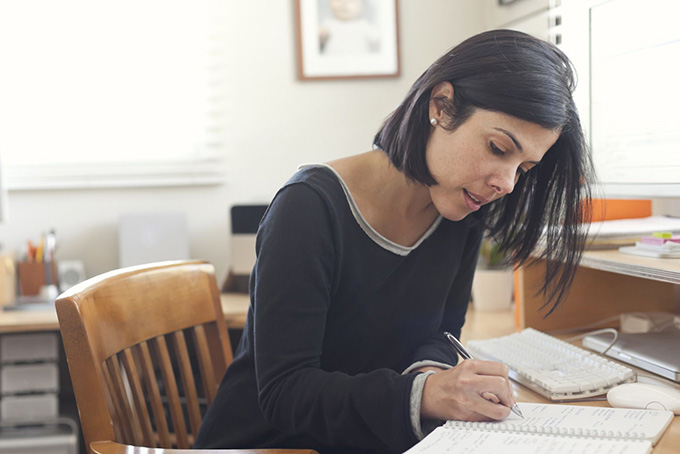 Desensitisation is a psychological term. It is used to describe a process through which a very anxious – perhaps even phobic – person gradually becomes used to the object or situation which makes them afraid. Professional support is often required for effective desensitisation.

Desensitisation usually consists of three steps – developing a fear hierarchy, relaxation training and then something called reciprocal inhibition. Let me explain these steps in a touch more detail.

The fear hierarchy – well this requires making a list. You make a list about the thing you are anxious about, going from the least terrifying version to the absolutely most awful. (In clinical practice this list-making is done with a therapist and there might be discussions about where these fears came from. ) My favorite example of a possible fear hierarchy is this –

Now I assume that when this imaginary fear hierarchy was drawn up the spider in question was actually your ordinary harmless garden spider. It wasn’t one of the very many bitey and downright dangerous eight-legged creatures found in Australia for example. Clearly, giving your average dingy-di redback a bit of distance is a pretty good idea. No crawling up the leg please. Simply recognising a redback and keeping your distance without panicking is what’s required. But I mustn’t get too distracted by the venomous possibilities of Australian arachnids… suffice it to say that knowing what and when you need to leave well alone is also part of the process.

After developing a fear hierarchy, the anxious person then learns and practices relaxation techniques such as deep breathing, meditation, developing countering-images or systematically relaxing muscles. The anxious person is then gradually introduced to the cause of their anxiety while relaxed, working through the various versions and levels, from mild panic to gut-wrenching fear. The theory is that you just can’t get tense and breathe shallowly at the same time as your muscles are loose and you are breathing deeply and slowly. You have to do/be one or the other. Because  you can physically only be/do one of these  states – anxious or relaxed – it’s reciprocal inhibition. And then, after you have faced your fear in a relaxed state, well, it stops being so scary.

The other desensitising technique is called flooding. This is when the person faces their fear at its worst – no gentle moving through stages – just straight in at the most terrifying. Here’s a spider, yes it’s pretty big, but it’s harmless I promise, just stroke it. Faced with their worst nightmare, the person then works to replace their fear using the relaxation techniques they’ve learnt. Flooding is usually carried out in clinical situations – although it also bears a remarkable similarity to things that happen in reality television!

Speed writing for example – the use of timed writing sessions, the backbone of shut up and write meetings – is a form of reciprocal inhibition. The theory here is that you can’t get into habituated ways of self-censoring, worrying about every sentence, stopping rather than starting, if you are focused on writing as much as you can as fast as you can. Just as you can’t relax and be tense at the same time, you can’t edit your work as you go along if you are also writing a stream of consciousness. (It’s not surprising that speed writing was one of the strategies advocated by Robert Boice and Peter Elbow, both psychologists.)

Regular blogging in an informal style can also help you to get over writing worries. Writing something more colloquially and less high stakes sits somewhere in the middle of the writing fear hierarchy. Writing conference papers and book reviews can help you to move up the stages of fear of writing for public scrutiny too, they don’t have the same consequences as the thesis exam or journal article review.

Co-writing is a great way to desensitise a fear of critique and a fear of cutting hard-won words. Co-writing helps you change an habituated avoidance of revision. A shared conversation about how to improve a text for which you are both responsible is as good as a few deep breaths.  A trusting relationship with a co-writer, or with a team of co-writers, can go a long way towards helping you separate your sense of academic competence from your first drafts. It can allow you to shift from a habit of minor edits to fearlessly holding a draft to rigorous scrutiny.

And perhaps the thesis boot camp and writing retreat are a kind of flooding activity. Writing the thesis, the journal article, the book are the academic equivalent to stroking the spider. In a supportive environment and in the company of peers, with plenty of creature comforts and rewards available, people with writing anxieties are encouraged to jump into this very high stakes writing activity for hours – days – on end. By immersing themselves in the thesis or paper, in the right context, they are able to break through the anxiety associated with being able to produce large quantities of important text in a short space of time.

So all of those things you read as writing strategies and advice? Free writing, blogging, retreats….? It seems they do have a basis in psychological theory and clinical practice. So if you do  have writing anxiety, it might be productive to think about desensitisation, read a bit more about it, and see if these approaches might have anything to offer you.

And if you have a really serious writing anxiety problem, do seek some help.