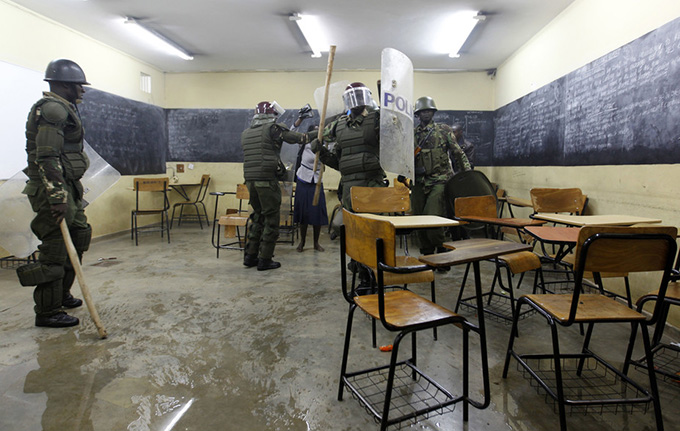 Political interference in Africa’s universities is not new. Universities’ governance was seen as “captured” for narrow political rather than academic ends during the 1980s and 1990s. Politics shaped everything: patterns of student access, curriculum content and teaching methods. Vice-chancellors’ political affiliations mattered far more than their academic standing or vision.

The continent’s universities started changing from the middle of the 1990s. Strong governance structures were prioritised. Governments promised to help steady institutions so they could focus on their academic missions. They also handed over the financial reins, supposedly allowing universities more freedom to generate new income streams.

But studies funded by the Carnegie Corporation of New York and conducted by the Council for the Development of Social Sciences in Africa (CODESRIA) suggest that not much has changed. The governance and leadership of universities in several countries remains troubled. The same tensions and crises associated with the old political order – student disturbances, harassment of academic staff and widespread academic corruption – persist. Our research suggests there hasn’t been much more than cosmetic autonomy at most African universities.

We found some deeply worrying trends.

First, Africa’s politicians still see universities as critical outposts for building political clients. They have a deep interest in who becomes a university vice-chancellor. They want to manage who ascends the academic ranks and who serves in student leadership. They also try to assess which academics can be conscripted to offer positive political commentary in the popular media. On the surface, universities’ governance organs appear free to make decisions about academic and leadership appointments. But our data suggests that opaque networks rather than merit determine such appointments at all levels.

It goes further. Universities have money to spend on procuring goods and services. This attracts businesspeople. Politicians, our studies showed, encourage university leaders to employ service providers from their own networks. These practices have turned some vice-chancellors’ offices into bureaucracies that are more interested in business than in academic advancement.

Vice-chancellors also appear to have become more autocratic. This is in reaction to the internal dissent caused by the political meddling described above. Staff and students are routinely subjected to unfair disciplinary processes. Vice-chancellors apply the lessons they learn from becoming bureaucrats to manage academic appointments. Some extend favours to certain internal “clients” – academics – by appointing them to lucrative administrative positions or promoting them without merit. Such positions are highly sought after because they pay better than most teaching posts.

Our research found that many African universities rely on younger academics to occupy senior teaching, research and administrative posts. They do not have the courage or experience to confront a university management gone astray.

Finally, and crucially, African universities lack data. There is little information collated about governance and leadership. This includes such basic statistics as student enrolments and staff numbers. Minutes related to critical governance and management issues, including those involving budgetary processes, remain classified. They can’t be scrutinised by the public – let alone by staff and students at the university.

Shortcomings of the ‘reforms’

Part of the problem stems from how “politics” was conceptualised and defined as a problem in university governance. If a country’s president was also a public university’s chancellor, this was seen as political interference. Logically, then, people thought that cutting such visible political links would settle governance issues.

But political interests run far beyond the presidency. Most of Africa’s political and economic elites retain a keen interest in determining how universities’ leadership is constituted. More and more student activities at universities are being organised along political party lines, which attests to new forms of politicisation.

As I explained earlier, universities make good business sense for the elite. These people create networks that extend into universities’ governance structures. Political interference persists. It sets institutions up as little more than business outposts.

There was also an assumption that academics – once freed from narrowly defined political interference – would meaningfully and responsibly utilise their new autonomy. The hope was that they’d emerge as protectors and promoters of the greater public good in higher education. This hasn’t been the case. CODESRIA’s research found that many senior academics have embraced post-1990s reforms only if these offer a stream of extra income. Most academics, we found, prefer administrative to academic appointments because these are more lucrative. This has left most institutions without an experienced professoriate. A senior layer of academics is a critical body for any institution. It can stand up against management’s excesses and act as a vanguard for the institution’s academic mission.

Here the continent’s older institutions – like the universities of Ibadan, Legon, Nairobi, Makerere and Dar es Salaam – have fared better than newcomers. Older universities tend to have a greater number of highly trained academics still in their service. Institutions that were established during the 1980s, 1990s and more recently haven’t been able to build a robust professoriate. These younger institutions tend to be battling most with governance and management issues, as well as the attendant erosion of academic reputations.

There are several ways to start making universities’ “autonomy” from politics more than cosmetic.

University managers must be required by law to open up their systems to broad public scrutiny. For example, they should conduct some aspects of their affairs through public hearings. Most countries’ constitutional provisions already insist on public participation around budgetary and policy issues. Parliamentary committees undertake their work in public, but most African universities seem reluctant to embrace such aspects of accountability.

This sort of transparency would tackle claims of bias in academic appointments and financial improprieties that are emerging as the “new face” of corruption in most universities. Imagine if prospective vice-chancellors and senior professors were interviewed publicly? Ordinary citizens could also be called on to make suggestions about a public university’s development and direction. These institutions are, after all, funded from the public purse.

Another area that needs attention is data governance: the collection, storage and dissemination of data for decision-making. Our research has found that most African universities are strangely casual about data. There’s no accurate record of admissions, so no plans are made about building infrastructure to keep up with student numbers.

This comes at a time when the use of open data is being encouraged as a benchmark for university quality. Studies have pointed out how open data can open opportunities for improving higher education’s governance and provide evidence that improves policy.

Africa is lagging behind. Universities claim, for instance, that they’re producing graduates ready for the job market. But we couldn’t find a single credible graduate tracer study or labour market survey to back such claims. Better data governance structures would lessen the chances of backroom deals and political interference in the running of Africa’s universities.

Author Bio:Ibrahim Oanda is a Programme Officer for Research (Higher Education) for the Council for the Development of Social Science Research in Africa