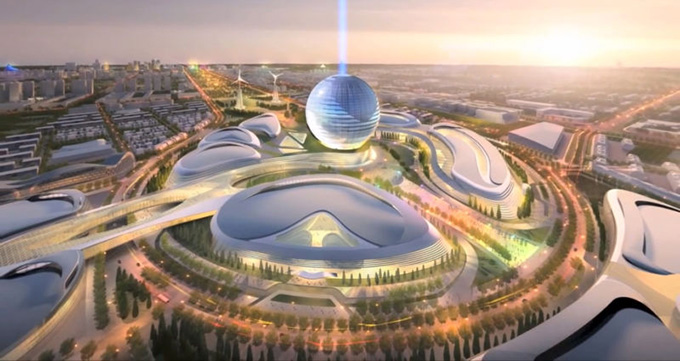 A fictional rendering of social philosophy, the book describes an exemplary society on an imaginary island in an unknown place faraway across the seas.

Coined by More from the Greek ou-topos, meaning no place, or nowhere, the word utopia has become adopted in the English language to mean a place where everything is ideal or perfect.

In celebrating Utopia’s 500th birthday, the Ecotopia 2121 project, of which I am the coordinator, is harnessing Thomas More’s spirit to predict the futures of 100 real cities around the world – if they somehow managed to become super eco-friendly.

Of course, modern utopias need to be eco-friendly to overcome the global environmental crisis. Given that cities may be home to 80% of humanity by the end of the century, they can only be sustainable if environmentalism is one of their core features.

The cities of Ecotopia 2121 are presented in the form of “scenario art”, which involves a review of both global and local environmental challenges as well as their unique histories and cultures. This allows for a diversity of future scenarios rather than one common vision of the “future city”.

What you will see below are a series of artworks, but this is not an art project. We use art as a means of analysis and communication.

With that in mind, here are six ecotopian cities of my own creation that emerged from the project, one from each inhabited continent.

Accra, the capital of Ghana, is exposed to disastrous floods every year. This has been made worse by climate change, as well as unregulated construction and dumping in and around its waterways.

In our imagined future, locals seek to procure housing above the floodline, by building low-cost tree cabins in the nearby forest. 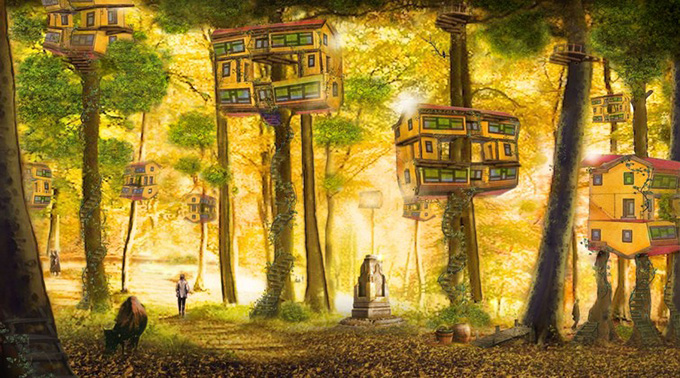 Ghana has one of the highest deforestation rates in the world, but by 2121, the forest has become a home for some of its citizens.

Accra’s new residents would protect the forest ecosystem from those who would destroy it, such as the logging, mining and oil companies.

In the summer of 2121, during an economic downturn, 100,000 pensioners take to the streets of London, the British capital, to protest cuts in pensions and education, shutting down the entire city.

They bring along their grandchildren to give them something interesting to do as they mind them. By summer’s end, the protesters despair at the government’s poor response, so they take matters into their own hands, staging a permanent occupation. 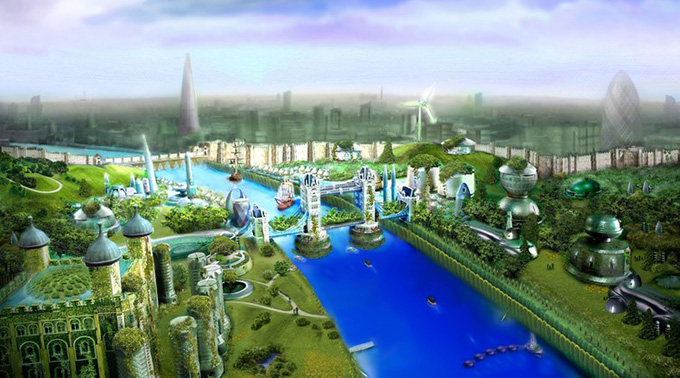 The pensioners convert some 20km² of London into a large eco-village, transforming unoccupied offices into homes, sowing garden lots on street corners, and setting up eco-businesses to trade products and services.

In the process, all the children get free education from their experienced elders in these various green arts and crafts.

The southern Californian city of Los Angeles once had a great network of tramways, but this was systematically bought up and then closed down by a group of conspiring auto-manufacturing companies. 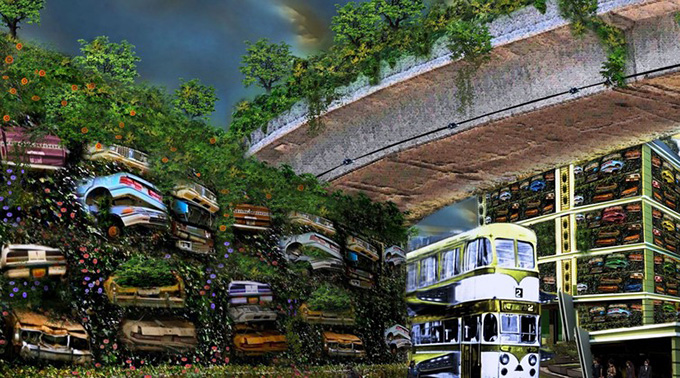 As the world’s oil is depleted by the end of this century, cars will become useless and trams could make a comeback in Los Angeles. The unused freeways could then be redeveloped into vegetated greenways. Such greenways are suited for pedestrians and cyclists, but they could also act as ecological corridors, connecting populations of wild plants and animals around the city that would otherwise be isolated.

Retired cars could then serve as part of the fabric of high-density buildings, creating an architectural style whereby people live and work in smaller structures and within tighter-knit communities. This would mean cities such as Los Angeles would not need to sprawl further into the countryside and wild lands.

Known in English as the Chatham Islands, Rēkohu is an archipelago in the Pacific Ocean, 680km southeast of New Zealand. It’s the ancestral home of the pacifist Moriori people, who came to wear the feathers of the native albatross in their hair to symbolise peace during the 500 years they lived on the archipelago.

In the 19th century, British sealers and Maori warriors from New Zealand discovered the islands. The sealers decimated the colonies of the animals and introduced devastating diseases to which the Moriori had no immunity. Then the Maori staged a violent takeover of the islands, slaughtering or enslaving the remaining Moriori. 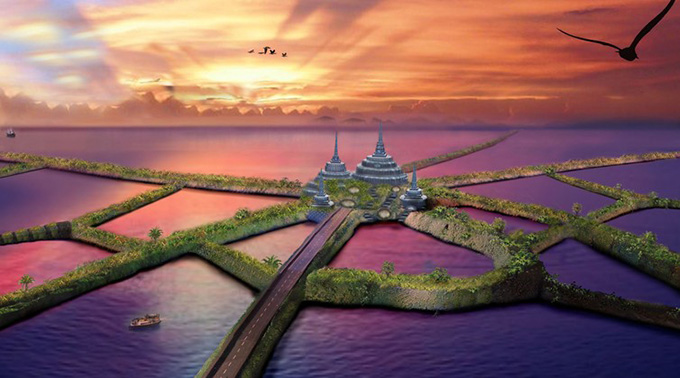 The Moriori refused to give up their pacifist ideals to fight against the invaders. While this history suggests pacifism is only going to get you killed or enslaved, the Moriori who survive today believe otherwise. They maintain that their pacifism meant that they lived in a peaceful society for five centuries.

By 2121, their small capital city on the lagoon is home to a peace school that expounds the virtues of pacifism to the rest of the world.

The Guairá Falls along the border of Paraguay and Brazil were once a natural wonder. The cacophonous roar of their seven columns could be heard many kilometres away and, for many years, the falls were a major attraction. They were also the economic lifeblood of the nearby Paraguayan city of Salto del Guairá, which thrived on tourism.

In 1982, however, the Brazilian military government blew away the rocks over which the water fell, to create a reservoir for a dam. Many Paraguayans mourned the passing of their much-loved falls. 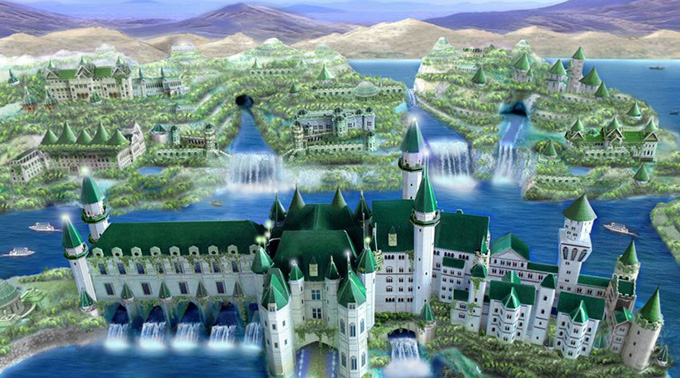 By 2121, though, both the falls and the city have re-emerged in splendid style. The dam has collapsed through neglect and local people have regained control of their land. They set about rehabilitating the falls as best they can, turning their home into a scenic eco-city that attracts tourists once again.

After a nuclear meltdown just out of town, a vast radioactive cloud sweeps over future Tokyo. Everyone must be evacuated. A few hardy “nuclear families” tough it out in “moonbase” homes, which are impervious to radiation.

Everything these families eat and drink must be produced and recycled within these homes. When they step outside, they must don protective clothing or “moonsuits”. 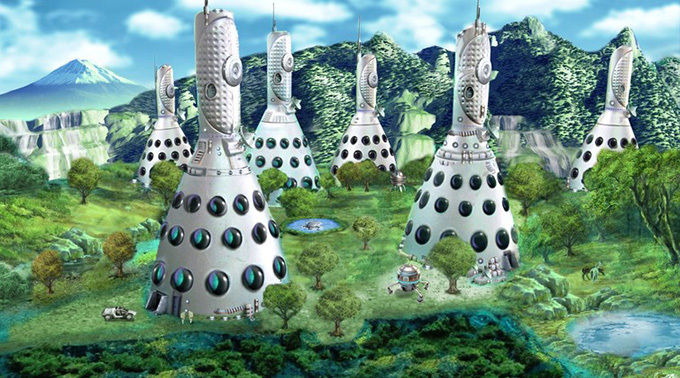 But because Tokyo is suddenly depopulated, it’s not nearly as noisy and stressful as before. If “hell is other people”, as French philosopher Jean-Paul Sartre suggested, then Tokyo 2121 is utopia.

Wildlife also rebounds, albeit in a mutated manner.

These six scenarios are but a small sample of the 100 that were produced within the Ecotopia 2121 project. Some readers will be delighted and others confused by the method of the project and its results.

Part of the point of utopianism is to be provocative. If you like your future riddled with self-driving cars and the magic of nuclear energy, then maybe these scenarios are not for you. And you’re likely to dismiss them as fantasy anyway.

But to study utopias – and formulate alternative scenarios to how we now live on this planet – is not an escape into fantasy. It is an active response to the many technological fantasies cast about with extravagance and excess into our lives right now.

These fantasies bind us to an unsustainable and unlivable future. If Ecotopia 2121 is but a collection of fantasies, at least they would do less harm to the planet we live on.