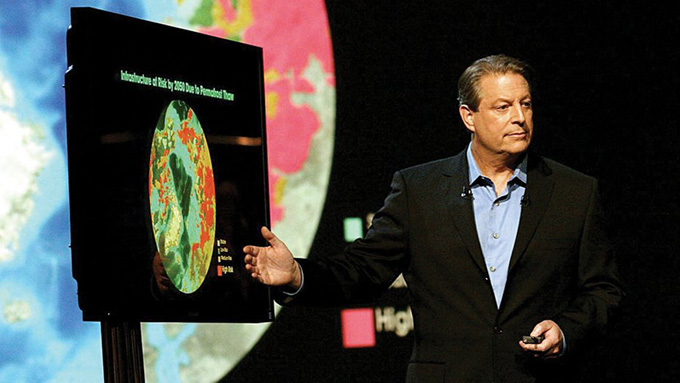 Ten years ago, An Inconvenient Truth opened in cinemas in the United States.

Starring former US vice president Al Gore, the documentary about the threat of climate change has undoubtedly made a mark. It won two Academy Awards, and Gore won the 2007 Nobel Peace Prize for his efforts to communicate human-induced climate change.

An Inconvenient Truth (AIT for short) is the 11th-highest-grossing documentary in the United States. According to Texan climatologist Steve Quiring:

AIT has had a much greater impact on public opinion and public awareness of global climate change than any scientific paper or report.

But has the film achieved what it set out to do – raise public awareness and change people’s behaviour in order to reduce greenhouse gas emissions?

A public survey by the Pew Research Center for People & the Press found that in the months following the documentary’s release, the percentage of Americans attributing global warming to human activity rose from 41% to 50%. But how do we know whether AIT contributed to this increase?

Similarly, surveys of moviegoers and students found that watching AIT increased knowledge about the causes of global warming and willingness to reduce greenhouse gases. However, this increased willingness didn’t necessarily translate into action. A follow-up survey conducted a month later found little change in behaviour.

One novel approach found a 50% increase in the purchase of voluntary carbon offsets in areas where AIT was shown. This is encouraging evidence that the film did lead to tangible behaviour change. But again, the effect wasn’t long-lasting. A year later, there was little difference in carbon offset purchases.

This study also found that polarisation decreased after the release of AIT, pouring cold water on the claim that Al Gore polarised the climate debate. Rather, the polarised positions on climate science among Democratic and Republican leaders (one party broadly accepting the science, the other significantly rejecting it) was found to be the key driver of public polarisation on climate change.

This led the study’s author, Robert Brulle, to state:

I think this should close down forever the idea that Al Gore caused the partisan polarisation over climate change.

This body of research underscores the difficulties confronting any public awareness campaign. AIT was successful in raising public awareness of climate change, increasing willingness to change behaviour and, in some cases, actually changing behaviour.

However, the effect didn’t last long. This indicates that persistent communication efforts are required to promote sustained behaviour change.

While AIT was effective among the general public, there is no tougher crowd for a science documentary than scientists. A survey of members of the American Meteorological Society and the American Geophysical Union found that among the scientists who had seen and rated AIT, 72% said the film was either somewhat or very reliable.

To put this in perspective, only 12% of scientists who had read Michael Crichton’s contrarian novel State of Fear rated it as somewhat or very reliable.

Going into more detail, an edition of GeoJournal had four scientists critique the scientific accuracy of AIT. Unfortunately, the panel was made up of two mainstream scientists and two contrarian scientists – a false-balance form of coverage that actually causes confusion rather than increases literacy in the context of media coverage. (For an incisive look at false-balance coverage of climate change, watch John Oliver’s statistically representative climate change debate.)

The outcome is somewhat predictable, with mainstream scientists reporting a more positive assessment of the accuracy of AIT than the contrarian scientists. Nevertheless, a useful overview of the exercise is provided by Texan climatologist Gerald North, who concluded that while there were some inaccuracies in AIT, on the whole it represented mainstream scientific views on global warming.

Ultimately, the factual inaccuracies in AIT were deemed inconsequential and don’t undermine the main message of the film.

While most of the research into the impact of AIT investigates the direct effect on viewers, a potentially more significant impact is the film’s role in inspiring others to follow Gore’s example in communicating the issue of climate change to others.

Personally, I can attest to this influence. Before 2006, I hadn’t given much thought to the climate change issue. Watching AIT raised a number of questions about the human role in global warming.

With the issue salient in my mind, I got into conversations with family members who happened to reject the scientific consensus on climate change. This precipitated the founding of Skeptical Science, which led to me becoming a researcher in climate communication at the University of Queensland.

I’ve spoken to or know of many other climate communicators whose awareness of the issue dawned with their viewing of AIT. While the direct effect of the original screening of the film may have dissipated, the impact of those inspired to communicate the realities of climate change persists.

For me, the film precipitated a series of events that ultimately redirected the course of my life. An Inconvenient Truth wasn’t just behaviour-changing, it was life-changing.

No lab experiment can quantify that level of impact.