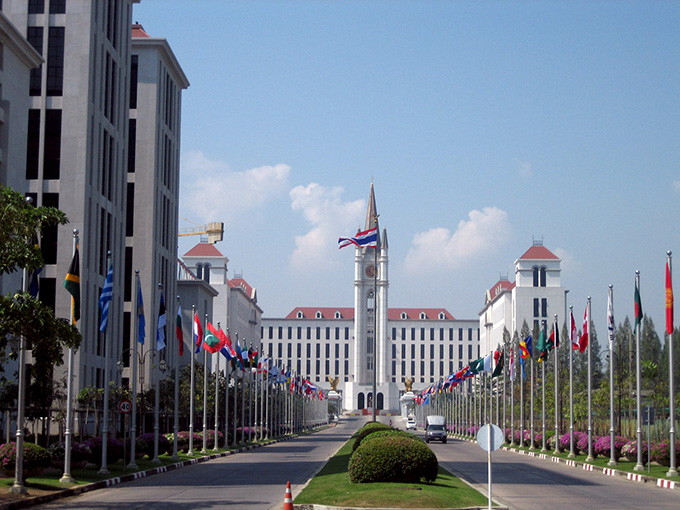 Even if your college or university has suffered from excessive administrative in-fighting, I doubt that it has come anywhere close to match the following situation, reported in the Bangkok Post in Thailand:

“Assumption University is once again engulfed in chaos due to factional infighting over who has the right to be the university’s rector.

“On one side is Bancha Saenghiran, a Catholic religious brother, and on the other Sudhiporn Patumtaewapibal, a layman.

“The university closed both its Huamak and Bangna campuses on Tuesday as the power games being played out in the administrative offices were affecting lecturers’ safety and students’ learning environment, a source close to Brother Bancha said.

“The source said the new round of internal conflicts at the university, known widely as ABAC, escalated on Monday morning when Mr Sudhiporn, who claims to be the legitimate rector, accompanied by 20 men, tried to break open the Huamak campus gate. However, they were prevented from doing so by security guards hired by Brother Bancha.

“’When Mr Sudhiporn could not enter the Huamak campus, he went to the Bangna campus with 100 armed men. He entered the campus claiming he was the sole legitimate rector of the university and he wanted to replace the university’s security team,’ the source said.

“Mr Sudhiporn announced at the university that all staff must follow his orders. However, many lecturers asked him to leave as they said the situation could affect their teaching. He refused to go away and told his men to take control of the Bangna campus, the source said.

“’The university originally planned to close both campuses yesterday, but as the situation had the potential to affect the safety of students and lecturers, we decided to temporarily close the campuses two days early to avoid any clashes,’ the source said.

“The same day, ABAC deputy vice rector Annop Peungchuer with around 50  ABAC students and lecturers handed in a petition at Government House calling on Prime Minister Prayut Chan-o-cha to resolve the ongoing dispute within the university council where members have split into two sides.

“Mr Annop said a majority of the members of the university council led by Mr Sudhiporn were planning to take over the university from Brother Bancha, who is the only legal head of the institution in his opinion.

“He also pleaded with government agencies to investigate the campus invasion on Monday.

“On Wednesday morning, Mr Sudhiporn and 20 men showed up again in front of ABAC’s Huamak campus. This time he ordered his men to use steel cutters to break open the front gate, but the security team sprayed fire extinguishers at Mr Sudhiporn and his men so Mr Sudhiporn told them to surround the campus instead, the source said.

“Police were then alerted to the situation as both sides were ready to attack one another.

“’After the police came, Mr Sudhiporn agreed to temporarily withdraw his men from the Huamak campus and not to break into the university during this New Year holiday,’ the source said.

“As the chaos started drawing media attention, Education Minister Dapong Ratanasuwan called for an urgent meeting of the Office of Higher Education Commission’s (OHEC) committee to find the best solution for both sides.

“’On Jan 4 next year, Ohec’s committee will look into the dispute at ABAC. If the situation is considered out of control and affecting students’ learning, the ministry might have to send a team to temporarily take over the university until we can end the problem,’ Gen Dapong said.

“The source said that back in July, Mr Sudhiporn and his supporters invaded the university just as he did on Monday. At that time, he announced at the university that all staff must follow his orders while one lecturer was assaulted by his men.

“On the phone with the Bangkok Post yesterday, Mr Sudhiporn insisted that as the legitimate rector of the university he did nothing wrong on Monday and Wednesday.

“On the contrary, he was the one who was prevented from entering his own office, he said.

“’They said I tried to invade the university. How can I be an invader? I’m the rightful rector of ABAC according to the university council. If they notified the police that I invaded the premises, they have reported false information intentionally,’ Mr Sudhiporn said.

“He also denied an allegation by his rival that he brought 100 armed men inside the campus, saying he only changed the security team from one company to another and none of them had any weapons.

“’Actually, it’s Brother Bancha’s side that tried to get soldiers involved in this conflict. I can give you a tour right now to show there are soldiers inside the Huamak campus,’ he said.

“The conflict between Brother Bancha and Mr Sudhiporn has been simmering for over six months.

“Mr Sudhiporn, who was the university’s deputy vice-rector, claimed he had the right to become acting rector after Brother Bancha, the incumbent, was temporarily suspended by the university council on June 18.

“It followed the discovery of alleged irregularities in various university affairs, including a plan to procure and develop a flight simulator facility costing 350 million baht.”