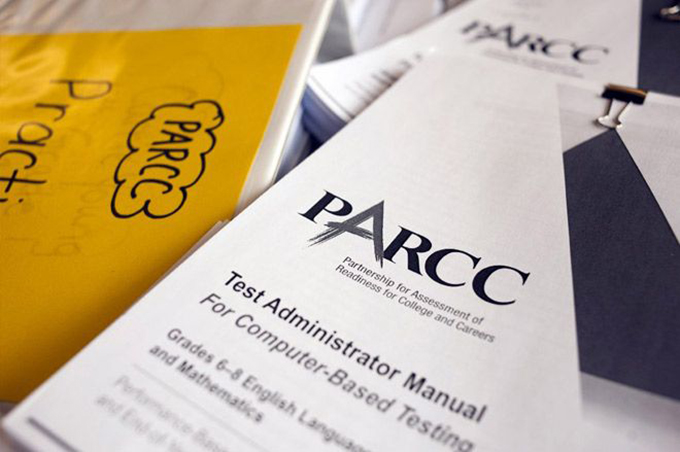 Yandilixza Esteves’ face lights up when she talks about reading. Her favorite books are from “The Magic Tree House” series because, “I can imagine I’m in the places they’re talking about,” she says. Esteves, age 10, is a fourth-grader at Roberto Clemente Elementary School in Newark, N.J., and a native of Puerto Rico. She moved to Newark with her family at age 4. Esteves’ teacher gives her books to take home, part of the school’s push to keep students reading outside of school.

In last year’s statewide Common Core-related PARCC test, just 24 percent of the students at Esteves’ school met grade-level expectations in reading and writing, a category called English language arts and literacy. This put the small school and its 494 students in the 8th percentile of elementary schools in the state of New Jersey.

The Common Core standards, a set of English and math guidelines adopted by more than 40 states, challenge many commonly held beliefs — including how best to teach children to read. In the midst of this year’s springtime testing period, an anonymous teacher revealed test questions from the still ongoing multiday PARCC (Partnership for Assessment of Readiness for College and Careers) test taken by New Jersey students (including Esteves). Five other states, the District of Columbia, the Bureau of Indian Education, and the Department of Defense Education Activity (the agency that manages schools for military children) administered the same test.

Slamming the test’s reading questions as being inappropriate for fourth-graders, the unnamed teacher added that “the high-stakes accountability system has deformed teaching and warped learning in many public schools across the United States.” Efforts by the test creators to remove the published questions from circulation while the test was still ongoing were not met kindly by critics.

And yet, the research backs up the more rigorous Common Core approach, according to Timothy Shanahan, distinguished professor emeritus of urban education at the University of Illinois at Chicago. One of the several ways that Common Core literacy standards fundamentally differ from previous standards is that, in order to best assimilate the skills necessary for meeting grade-level expectations, students must spend more time reading challenging, difficult-to-read texts in multiple genres and about a variety of subjects.

Loosely, this means reading books and other materials that push at the very top limit of a child’s reading abilities — challenging them to stretch — rather than teaching reading solely via the often-favored “guided reading” method, in which students read books well within their established comfort level.

“In general, I think the common core approach is the right one,” wrote Shanahan in a blog. The difficulty, he added, lies in preparing teachers, accustomed to teaching reading the old way, to help students tackle the more difficult readings.

The controversy about the revealed PARCC questions also highlighted another dilemma: How to devise a test that meets Common Core’s requirement to challenge children, but that is also fair.

For teaching veterans like Claudia Pinheiro, a fourth-grade teacher at Roberto Clemente, Common Core standards fundamentally altered how she teaches. “When I started teaching, we had standards, but they weren’t broken down as they are now. Now I have the Common Core app on my phone and refer to it all the time,” said Pinheiro, who has taught elementary school for 23 years. “Especially in literacy, I now know exactly what they need to know at grade level and this really helps my lesson planning.”

But Pinheiro has mixed feelings about how high the bar is set for her students. “Some of the benchmarks are just way above the children’s heads; I honestly don’t think their brains are ready for some of the standards. Especially with the PARCC test, a lot of my students don’t have the background knowledge to deal with, for example, inferencing questions.”

Esteves, known to her friends and classmates by the nickname “Yandi,” is bright and personable. She tackled difficult reading questions in this year’s PARCC test with logical problem-solving techniques drilled into her brain during reading instruction by her teacher. “With hard passages, I don’t give up. I look at the question and then go back to the text and reread it. Or I’ll take an intelligent guess,” she said. “You can take pieces of the passage and put them together to see if they match the answers given. The trick my teacher taught me is to keep going back to the text, keep going back, keep going back.”

While the school’s principal, Dr. Yolanda Méndez, said that Roberto Clemente teachers do not spend much of the year teaching to the test, it seems that Esteves is nevertheless well aware of the stakes. “We take the test to see how teachers have teached their kids, like if they’ve teached them nothing and they don’t know any answers, teachers get rated and they might get fired because they might not be doing their job,” Esteves said. “It’s creepy because you try your best, but some kids just can’t learn, and a teacher will get fired because of those kids.”

Regardless of how effectively Pinheiro incorporates the Common Core academic standards into her classroom, challenges will remain. The reality is that, a school like Roberto Clemente — where Spanish is the primary language spoken in the vast majority of its students’ homes and where teachers must tailor lessons to the many different learning needs and levels of students in each classroom (a common teaching practice known as differentiation) — will always be at a sizable disadvantage on standardized tests.

“Does it give me angst? You bet it does. Because all things are not equal,” said Principal Méndez. Herself a onetime bilingual student at the school, she notes: “I have students that aren’t in a bilingual class but who still decode in Spanish, even though they speak fluent English. Honestly, I still do this myself sometimes. This creates a lot of confusion in the brain and has a big impact on the quality of many students’ reading and writing. And who knows how that can be measured?”

When so many Roberto Clemente students speak a language other than English at home, getting them interested in reading difficult texts in English — as they are challenged to do on standardized tests like the PARCC — demands persistence and a big-picture focus on teaching mastery of skills rather than short-term test-taking techniques. “I feel that reading aloud is one of the best ways to pique students’ interest,” said Pinheiro. “I expose my students to as many different types of reading genres as I can through reading aloud. And at the beginning of the year, after we determine their Lexile level [a system for matching readers to appropriate reading levels], I instruct my students to select a book about a subject that is unknown to them. Then I select a few students to share what they liked or didn’t like about the subject. This process usually triggers interest in other students.”

The PARCC test asks children to read, analyze and write about a variety of fiction and nonfiction passages in order to determine how each child ranks in relation to the standards. While an entire book might be rated at a high level of complexity, specific passages taken alone might measure as significantly easier to read. This is an important distinction to make when determining the grade-level appropriateness of, for instance, the publicly excoriated text passages from this year’s PARCC test. University of Illinois at Chicago’s Shanahan wrote via email that he suspects the PARCC-bashing anonymous teacher may have been wrong about the level of difficulty. “PARCC is contractually obligated to evaluate each passage using Lexiles and other readability instruments,” wrote Shanahan. “But mistakes do happen and it would sure be nice to settle that part of the dispute.”

Addressing the complexity level of the published test questions for the first time, Heather Reams, PARCC director of communications and public relations, told The Hechinger Report that the published text passages from this year’s test were well within the appropriate range for fourth-graders. “The passages in question are considered ‘moderately complex’ or ‘readily accessible.’ In fact, none of the passages revealed were determined to be ‘very complex,’ the highest complexity rating given for passages on the PARCC assessments,” said Reams. “The PARCC consortium uses several quantitative measures — Lexile, Reading Maturity Metric and SourceRater — and qualitative measures as well as the expertise of teams of educators to determine grade-level appropriateness of texts. These particular passages are within the Lexile range for fourth-grade students.”

While the published test questions “seemed wordy and overly complicated, what they were asking for did not seem particularly out of line,” Shanahan continued by email. “I couldn’t possibly place the questions at a particular grade level (nor can the critics, I might add). However, typically with test designs, such questions get a try-out by several hundred pilot subjects. Clearly, PARCC did not find problems with those items in their pilot. That doesn’t mean that the questions are all fine, but the way you determine that is by how well the population does on the particular question.” Student test results will be delivered this summer; items from this year’s test will become publicly available in early fall, according to Reams.

For Pinheiro, it’s hard to picture a test that would accurately capture how her students are progressing on the standards. “We’re constantly differentiating our teaching and PARCC is not differentiated. Everybody gets tested on the same standards. It’s just not fair.” The greatest criticism teachers have of the PARCC, she said, is “if you want us to differentiate lessons specific to each child’s needs, then standardized tests should be specific to each child’s needs also.”

For PARCC, the issue of whether the test disadvantages some children is a nonstarter. From the ground up, they frame the premise of the test differently: all students are held to the same achievement standards. “The PARCC assessment does not create differences or disadvantages; it measures where students are performing in relation to grade-level standards,” wrote Reams via email. “What is fair is to give parents, students, and teachers honest information about where students are performing in relation to the grade-level standards.”

And yet, “the kids sitting in these chairs at Roberto Clemente are not the same as the kids sitting at Livingston or Princeton,” said Méndez, the principal, referring to two affluent school districts in New Jersey. “There are differences, and I don’t think we take that into consideration. But, the complexity of creating a test that can assess this case by case? I can’t wrap my brain around how to do that fairly. If there was some way to say, ‘Based on the fact that this child has been in this country for two years and is not a native speaker, this is the progression . . .’ I have 200 kids who don’t speak English, but let’s talk about their incredible growth.”