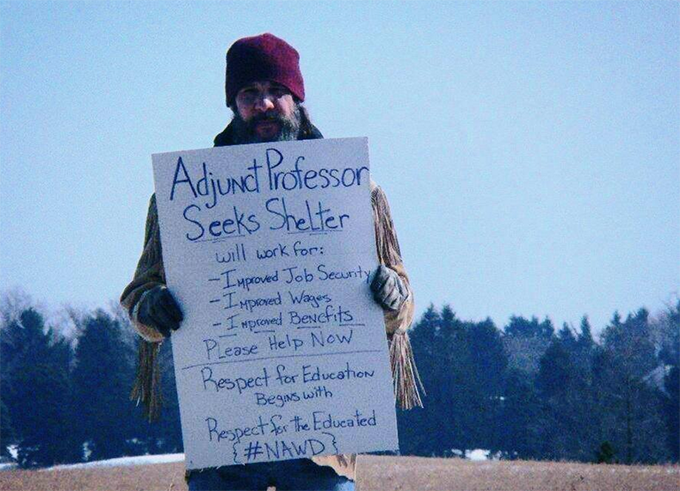 Most people have this idealized view of a professor in higher education, thanks to Indiana Jones: few hours teaching worshipful students, good pay, and a generally cushy life with enough time off to go around the world looting tombs.

The reality is far different. If Indiana Jones were a typical professor in today’s higher education, he’d be an adjunct, struggling to get by on around $20,000 a year, and spending more time driving from campus to campus than actually teaching students, students who will punish Jones if he hurts their feelings in any way. Instead of a valued scholar, Jones would be an expendable irrelevancy.

The Guardian has a whole series on what’s happened to professors in higher education, and it presents some firsthand accounts from the educated underclass who does most of the actual work in higher education today. The Guardian doesn’t pass judgement or analyze these stories, and so I feel the need to elaborate on what’s being said in a few of the tales.

Those whose positions were unionized (or at least somewhat organized) uniformly reported better pay, though some also reported retaliation against them from institutions bitter that they unionized in the first place. All agreed, though, that when you broke it down to an hourly wage by how much work is actually required, adjunct pay is absurdly low.

Due process is blatantly violated regularly in higher education today (I know this firsthand), there is no job protection for these teachers. Thus, there is a culture of fear on campus today, often degenerating into a culture of terror. Administrators have ridiculous power on campus, a power that is often used to make faculty miserable. I incurred some enmity when I suggested starting a union on campus…admin made it clear they would not respect any union.

“My quality of life is garbage. I share a two-bedroom apartment with three other people and I can’t afford to get a haircut. I’m on food stamps. My parents pay for gas for my car and for my health insurance, or I wouldn’t have any. People are incredulous when they find out that someone with a graduate degree in math lives like I do.”

Yes, that’s right, even a graduate mathematics degree isn’t worth much. Surprised? You should be, since we hear every single day how we need more math teachers, more math in general, and there are endless programs to generate more math degrees.

Of course, we hear this from administration. Administration hates spending money on education, and so is highly motivated to create as many “licensed” people as possible, to drive down the value of the degree so they can hire teachers very, very cheaply, even to the point of making highly questionable Education degrees count as “jokers” for all academic disciplines.

Does that sound cynical? Please, gentle reader, understand that higher education administrators make 8 to 20 times as much as a typical adjunct, and faculty are a minority on campus today…it’s mostly administration now.

So, it’s completely obvious that “higher education administrator” is a higher paying, in higher demand, job than “math teacher.” And yet, I openly defy anyone to find a “bold new initiative” to create more “higher education administration degree” graduates, even as every campus has an initiative to increase the number of STEM and/or Education graduates. Considering the administration degree, even at the Ph.D. level, is a complete joke (so it has high graduation/retention) what other explanation could there be for the excess of math programs, beyond cynicism?

Many adjuncts say that they are forced to accept teaching gigs at several different far-flung campuses during the same semester, leading to long commutes and little time for anything else in life, just to try to scrape together a living.

Is the hamburger you buy at a typical fast food place identical to the one you buy for ten times as much at an upscale place? Of course not. Why do our institutions of higher education get away with this?

All our higher education institutions are now powered by massive student loans…they basically all have the same customer, the one who ultimately provides the loans, the Federal government. This customer, the Federal government, is so clueless about education that it uses accreditation, which I’ve long since shown as bogus, to determine which institutions can get the money. Since accreditors get a cut, they determined every institution willing to write them a check is qualified, and education isn’t relevant.

Once a school is accredited, the money pours in fast, paid by a customer who can’t differentiate between ground up pink slime and a porterhouse…the profit margin is better with the pink slime. The corporatization of higher education and resultant control by sociopathic Poo Bahs means profit, not education, is the only factor in deciding what to sell. Pink slime it is, then.

“I am an adjunct in the English department at a large public University in Texas. I also teach classes for a local community college. In addition, I do academic odd jobs, like ‘coaching’ in gigantic online distance ed classes and scoring AP exams.”

Hey, see what admin did there? You don’t “teach” online courses (and by gigantic, we’re talking several hundred students, possibly over a thousand). You’re not a teacher, you’re a “coach.” This gives many benefits to the institution when it comes time to say they pay their professors well—coaches aren’t professors, see, and don’t figure into that calculation. Students pay the same price either way, of course.

The number of students in online classes isn’t the only thing that’s gigantic, the profits are amaaaaaaazing as well. No need to share that with the teacher coach. Meanwhile, administrators re-classify themselves as professors even if they never teach a class (I’ve seen it), and then claim they pay the professors well.

“The problem, as your article points out, is that nobody is hiring. I’ve been on the market twice now, which means that this year I was applying for jobs alongside of people who just earned their degrees — and so this year, my cohort of 4 applied alongside another dozen or so. Of roughly 16 people (I don’t have the numbers on this exactly), 1 person landed a job. And of course, next year, those numbers will increase: the system has hit a bottleneck, so much so that after being told that the department intended to bring me back next year, just yesterday I received an email with the clause: “However, because of what is potentially an unprecedented number of new post-docs,…”

Every time a position opens for an actual faculty member, we get hundreds of applicants…we hire one a year at best, then graduate, every year, a dozen or more Ph.D.s to seek their own position, and most every institution works the same way. I’ve written before of the irresponsibility of higher education in this regard. We need to slow down, but our administrators have overbuilt the campuses, overextended our institutions in a great number of ways…we need to ever push for more growth, beyond all reason, just to be able to keep up with the Poo Bah’s pay raises, as well as pay raises for hives filled with educrats that do nothing for students or education.

At some point, this bubble has to pop (and please consider the graph at that link, closely), it’s only lasted this long by impoverishing our kids and educated class.

More on this next time.