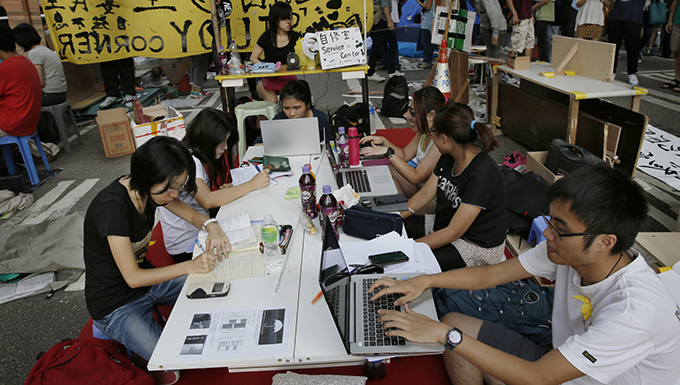 –20+ years ago, I’d get a student like this every semester, but it’s been years since I’ve had even one. Mostly this is because of grade inflation—in most courses, getting an A means you showed up, if that much.

It’s no secret grade inflation runs rampant in higher education, and, as always, I’ll link that to the student loan scam. The money from the student loan scam caused tuition to inflate. Instead of paying a hundred bucks for a course, a student now pays a few thousand: he’s going to be much happier with a better grade than back when courses were relatively cheap. Toss in admin, paid to make sure the students are happy, and, sure, pressure goes on the faculty to do what it takes to make the student happy. “Easy A” is a cliché for a reason.

The student loan scam has been flooding campuses for well over a decade now, and so now college degrees are worth what a high school diploma was worth a generation ago: nice to have, but not worth all that much.

Seeing their 4 year degrees are worthless, people are now flooding into graduate schools, paid for by the same student loan scheme that made the college degree nearly worthless. I do wish more people could connect the dots here, but that’s for another day.

Today I want to talk about getting into graduate school. I get regular messages from readers asking many questions about graduate school. While the key issue is picking a good school, the main obstacle is getting accepted. How do you get into a graduate school?

First thing to know: that high GPA that you thought was so precious? Like everything else paid for by the student loan scam, it’s worthless:

One astrophysicist…said, “Grade point, most people said it doesn’t affect them very much because basically everybody in the pool — everybody in the final pool — has such high GPAs that it’s not meaningful.”

Yes, getting into grad school with a 1.99 GPA probably isn’t going to happen (not for the good schools, anyway, and I strongly advise against going to for-profits for this, at least if you’re getting a degree thinking it’ll lead to a job), but once the admissions committee has weeded out all the 1.99 GPA applicants, they’re generally stuck with 50 or so applicants, all with GPAs in the 3.98 to 4.00 range. Now, some schools have A+ grades, so theoretically GPAs can go up to 4.33 now…but much like with public schools that do this sort of thing, the actual GPA is irrelevant, once you get past 3.5 or so.

A recent book examines how graduate school admissions committees at top schools make their decisions, and a recent article on Inside Higher Ed talks about this. Allow me to add some insights:

Ph.D. programs are one of the few parts of higher education where admissions decisions are made without admissions professionals.

Ah, the old cry of “we need more bureaucrats.” Admissions professionals…seriously? Look, it’s no secret that “math people” have characteristics that you generally don’t find in “English people” which you generally won’t find in “Arts people.” Hey look, now the gentle reader knows everything an “admissions professional” knows. Seriously, it seems obvious to let experts in the field determine if an applicant has what it takes to eventually become an expert.

This isn’t an easy job, I admit, and it’s easy to second-guess yourself. But letting an “admissions professional” do it is just plain stupid. Hey, we’ve let admissions professionals determine who gets into college in the first place…the end result is everything just became “open admissions.” So, yeah, just toss that idea in the trash, we don’t another layer of bureaucracy here.

While the article stumbles with this first step, there are some valuable things here:

For instance, those whose programs were not at the very top of the rankings frequently talked about not wanting to offer a spot to someone they believed would go to a higher-ranked program. They didn’t want their department to be the graduate equivalent of what high school students applying to college term a safety school.

This is important advice: if you’ve got your heart set on a certain school, realize they might think you are too good (!) for it, and turn you down. Make sure when you apply to let them know that you’re not applying elsewhere, especially if you have those top scores. It might be worthwhile to show up in person, too, just to let them know that, hey, you’re in the area, and not likely to go somewhere else.

So, if GPA is basically useless, what is worthwhile?

The GRE is the Graduate Record Examination, it’s like the SAT, except you take it after college, to get into grad school. Well, to get into good graduate schools, anyway. There are plenty of huckster schools out there that don’t require a GRE (in fact, every Education and Administration Graduate program I applied to didn’t care about GRE, all they wanted was a credit card number…), but this is what the top schools use instead of the GPA.

Why? Well, grade inflation has made GPA useless, and there are just so many bogus schools and departments (Hi, Education and Administration!) out there that you can’t determine if a student knows anything by looking at the GPA. Even the “Why I Want To Go To Graduate School” essay can be ghost-written easily enough (plenty of sites offer this service). But the GRE is administered, not by a government organization (hence, by nature, corrupt), but by a private company, Educational Testing Service, which charges people to take the GRE. If ETS becomes known as corrupted, then the GRE becomes worthless and nobody will pay to take it…and ETS goes out of business.

In short, GRE, unlike GPA, has integrity in it, and so is useful. Just one more example of why we really need to put integrity back into higher education, and soon, before it gets wiped out.

Further, she noted, the Educational Testing Service, which produces the GRE, has never suggested that departments use cutoffs the way departments routinely do.

‘If it’s not over 700, I won’t read anything.’ And that cuts usually two-thirds of applicants.”

–if you’re looking to get into a good grad school, there’s your target number. STUDY TOWARDS THIS GOAL AT A MINIMUM!

The book seems to have an agenda (thus the emphasis on “lack of admissions professionals” as relevant), and talks much of bias, discrimination, and “lack of diversity” as perceived problems, to the point of complaining about:

White males “dominated” the admissions committees, and Posselt writes that chairs cite diversity as a value in appointing members in only two of the 10 departments she studied.

To these complaints I must respond: “Whatever.” Graduate study isn’t about skin color or social justice warfare…it’s about academic ability. That said, there is one discrimination complaint that is worth addressing:

Many graduate departments — particularly in science fields — rely on international students. The departments observed by Posselt appear to practice a form of affirmative action for everyone who is not an international Asian student in that professors de-emphasize the (typically extremely high) GRE scores of such applicants to avoid admitting what they would consider to be too many of them. This is in contrast to the attitudes of many professors with regard to considering American applicants of various ethnicities — and who insisted on a single (high) standard there.

Referring to international applicants, one scientist told Posselt, “The scores on the standardized tests are just out of sight, just off the charts. So you can basically throw that out as a discriminator. They’re all doing 90th percentile and above.

GPAS are tossed, in part, because all students have about the same GPA. For Asian students (hi, China! At some point I might discuss “The China Problem”, but just so many fish to fry in higher ed…) all have the same high scores on the GRE, and so, to a lesser extent, those scores aren’t meaningful.

The gentle reader (and grad school applicant) needs to understand, studying for tests is an important part of Asian academic culture. When it was time for me to take the GRE, I was told “You should take the GRE, fill out this form, the test is in two months.” I wasn’t given preparation, or any guidance past that. I was on my own, and my options were look at my textbooks, or maybe buy a sample test to work on.

On the other side of the world, here’s how preparation for the GRE goes: “The GRE is 24 months away. You need to start studying! You need to enroll in a cram school for Tuesday, Wednesday, and Thursday, and since you only scored in the 85th percentile on the practice test, you should enroll in the remedial cram school for Friday, Saturday, and Monday night.”

I exaggerate about the second cram school (I think), but the point is, the Asian students really study hard…and they end up getting discriminated against, as their high scores don’t count as much as a high score for a “native” student.

But for my readers that are asking how to get into a good school, please, please, consider: all you have to do is study as hard as the Asians, and you’ll have an “unfair” advantage. Please, use the big secret for getting into grad school that I just told you.

There is more in the article, including a discussion of cheating (when it comes to English as a Foreign Language demonstrations, which are subject to corruption), but the takeaway here is clear:

GPA is now so corrupted that it means nothing. Thanks, student loan scam!