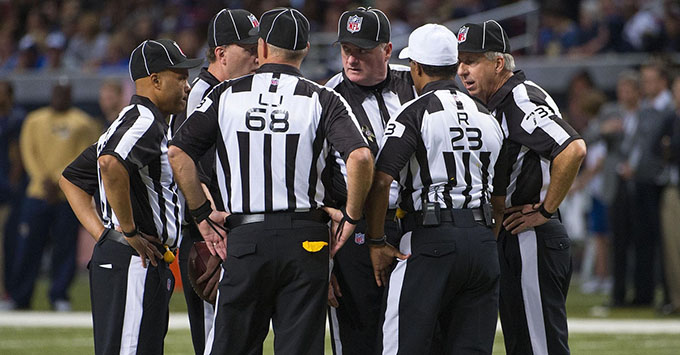 “We exist explicitly to rip off students as brutally as possible and we will deliberately provide no education in any form.”

–this could be the corporate model and official slogan of many schools, and accreditation would have no problem at all with it, as per their written policies.

It’s been a while since I’ve talked about how even incredibly corrupt academic institutions are allowed to keep their accreditation, their seal of legitimacy that lets them rake in huge sums of student loan money, trapping millions of our young people into a lifetime of debt slavery…without even a slap on the wrist from accreditation.

A recent click-bait article really hit home to me how obvious it is that accreditation is completely bogus, and has no relevance to legitimacy in today’s higher education system. The article is on obscure rules in the NFL (warning: click-bait article, many pop-ups and ads). Like accreditation, the NFL has many rules to cover even obscure situations. Here’s a quick example:

Be careful if you’re trying to ice the kicker. You can’t call two consecutive timeouts in the same dead ball period. Something has to happen on the field before you can call the next timeout. If you don’t, a 15-yard unsportsmanlike conduct penalty is called.

Neat. Note how the rule is precisely defined. Let’s take a look at a rule from SACS accreditation:

“The institution has a governing board of at least five members that is the legal body with specific authority over the institution…The board is not controlled by a minority of board members or by organizations or interests separate from it. Both the presiding officer of the board and a majority of other voting members of the board are free of any contractual, employment, or personal or familial financial interest in the institution…”

Again, the rules are pretty clear here. The board has to be at least 5 members, you can’t get around this rule by having members “in name” while the board is controlled by a minority, and you can’t have conflicts of interest (HOLEE COW is that last part violated with impunity!).

Does the gentle reader see the major difference between the NFL rule, and the SACS rule? It’s in the last line of the NFL rule: a penalty for violating the rules.

There are lots and lots of accreditation rules, but there’s no penalty at all for violating any of them, which is why you can see schools violating them, and violating them almost to the point of in-your-face. The Academy of Arts can have wild conflicts of interest in its Board, as the school pays huge rents on properties rented from Chair…it’s a clear violation of clear rules, but there’s no penalty so it doesn’t matter. Sweet Briar can get their board controlled by a minority…again, there’s no problem about this being a violation of accreditation rules when the minority took control, and I suspect that control has something to do with the mysterious bankruptcy and large sum of money vanishing. I could go on with similar outlandish violations of other rules, but it’s all the same with regard to lack of penalties. This is the big issue with accreditation, you can do whatever you want and you won’t even get a slap on the wrist. And that’s for violating explicit rules.

The NFL even has a catch-all rule, very vague, that allows for the inconceivable, as much as such could be conceived:

A Palpably Unfair Act: …a palpably unfair act is any illegal action that the officials deem has clearly and indisputably deprived a team of a score. That may sound vague, but it’s deliberately put in the rulebook that way. The penalty has never been called in the history of the NFL, but should a player on the bench ever decide to tackle a runner in order to prevent a score, the deprived team would be awarded with a touchdown.

Even with the rule being vague, the penalty is clear. The NFL hardly has a reputation for probity and wholesome business practices, but still understands how serious rules need to be written: every rule must have a penalty for violation, otherwise it’s meaningless.

On the other hand, accreditation had nothing to say about Penn State’s wild violations going on in the locker rooms. It was so wrong that the word “wrong” doesn’t even cover it…but accreditation doesn’t care.

One might say Penn State’s transgression wasn’t academic and didn’t really affect students, but what of UNC’s wild academic fraud, affecting thousands of students over nearly 20 years? A fraud involving cover-ups (still ongoing), harassment of whistleblowers, a fraud so institutionalized that students were encouraged at meetings to enroll in the fake classes? Nothing, beyond a very symbolic slap on the wrist.

So, indeed, accreditation is irrelevant. Who wants to fund me setting up my own institution with official motto of “We exist explicitly to rip off students as brutally as possible and we will deliberately provide no education in any form.” I’m sorry to ask for money for this, but there is one accreditation rule that I’ve never seen violated: failure to pay the accreditation fees.

See, the only thing an accreditor could do to a violator, theoretically, is to deny accreditation…but then it wouldn’t get those very lucrative accreditation fees. Institutions pay those fees not for a seal of legitimacy, but for one reason and one reason only: to secure that sweet, sweet, student loan money.

Of course the fees are paid, the penalty for not doing so is very clear.