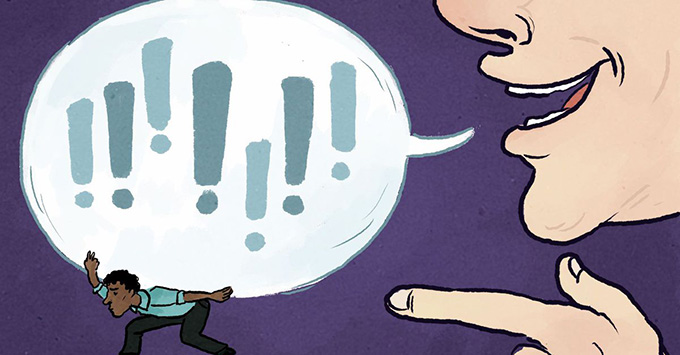 I’ve written before of the microaggression lunacy affecting our campuses. It contributes to the culture of fear that is the lot of a typical teacher in higher ed—everything you say can now be viewed as offensive enough for termination, even if the offense is too small to be seen by any normal person. How do you protect yourself against the undetectable threats?

One of the early researchers into microaggression has gone so far as to apologize for the contributing to the hysteria, and what it has led to:

Keep in mind that universities now maintain “bias response teams” that investigate students and professors suspected of saying the wrong thing. These teams occasionally recommend perpetrators for additional sanctions. But the academic who modernized the idea of microaggressions never imagined they would be weaponized in such a way.

Imagine the kind of terror working like this entails: teams of administrators scour everything you say, everything you write (your very lecture notes and syllabi are subject to this scrutiny), seeking anything that might be considered offensive by someone, somewhere, under some circumstance…and that includes circumstances that may never actually happen in locations that don’t exist to people that are never encountered.

While many attribute this lunacy to the Cultural Marxists and Social Justice Warriors running amok on campus, and I concede some truth to the claims, there is a simpler explanation. Our campuses are wildly bloated out with staff and administrators, with nothing to do. Decades ago, most workers in our schools were teachers, but now teachers are a shrinking minority on campus. All too often, our campuses are now composed of four types of buildings: sportsball complex, auditoriums capable of holding hundreds of students, a cubicle warehouse for the faculty, and, the most common building on campus: a bureaucratic hive for administrators and their support staff.

Many have tried to figure out what, exactly these people do to contribute to education and research (you know, the whole reason our institutions of higher education exist), to no avail. We know they have nothing do to. They know it too, and so spend much of their time trying to justify their existence.

And so, when the microaggression lunacy started, admin seized upon it, to create those “rapid response teams” to deal with imaginary issues. Alas, this only created make-work jobs for a handful of useless admin, and so they need to take it to the next level:

Suffolk University’s acting president, Marisa J. Kelly, announced late Tuesday that all faculty members would be required to go through training about microaggressions, the stereotype-based comments and actions that many minority students and faculty members say regularly make them feel unwelcome in higher education and elsewhere.

It’s just Suffolk for now, but I promise the gentle reader that other campuses will seize on this make-work project for admin, and microaggression training will spread across the country in short order.

The whole underlying theory about microagression is it hurts minorities. As a white male, I’m pretty much a minority on campus…but this means nothing as only “protected minorities” can be victims of microagression. This whole emphasis on “minorities must be protected” is just idiotic. Most people on campus today are female, as most students are female. So if admin were honest about this need to protect minorities, we would protect all males as “minorities”…I won’t be holding my breath on that, nor do I even ask for it. Bottom line, however, as a culture we’ve been subdivided with so many racial and gender labels that every single group is a minority. There will be no end to the microaggression madness, at least no end achieved by “training,” training which will inevitably be based around learning how to spot ever more ways to be offended.

The funny part is how admin have painted themselves into a corner here. Are they serious about the threat of microaggression training? If so, then that means they’ll have to keep the classes small and give real assignments. I’ve never seen admin care about teaching enough to do any of it themselves.

Is it just another make-work joke from admin? Then we’re back in auditoriums…but that’s an admission that they know they’re doing nothing but justifying their positions.

I want to touch a little on what initiated this brouhaha, which Suffolk will now spend a million dollars a year (or more), forever, on training faculty so it doesn’t happen again.

A Hispanic (whatever that means) student turned in a paper. The professor, simply doing the job, noted that the language in the paper was a little un-student-like: the student used the word “hence.”

The professor indicated that he didn’t believe this was natural language for the paper, and commented on it. It takes only a single cry of “RACIST!” for admin to leap into the fray. I’m serious, this is what happened.

Now, I’m perfectly willing to accept the student might have legitimately used the word, but, as I’ve mentioned so many times, cheating is rampant in higher education now. There are a ridiculous number of websites willing to write your papers for you, for a small fee, and these businesses are incredibly successful—every time I check on them they are still in business, collecting money from clients that, obviously, are cheating college students.

Faculty really can do nothing to stop cheating. Even to be suspicious of cheating in this environment can lead to cries of racism, which is pretty bad. Now it’s not just the cry of racism to endure, but faculty, all faculty, will be forced to undergo mandatory microagression training, forever.

This endless amount of money will be spent because one professor decided to get a little suspicious about cheating. Didn’t he get the memo about not caring about cheating anymore? Can we send him another memo and thereby avoid all this ridiculous training?

Every year from now, as all the faculty at Suffolk sit through a tortuous meeting on the tiny, tiny, ways they might, possibly, insult someone, somewhere, I bet they’ll be collectively thinking “Thanks for caring about cheating, idiot!”